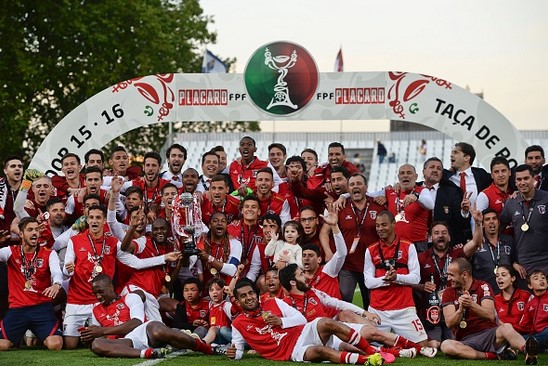 There was an exciting climax to the domestic season in Portugal as Braga beat FC Porto in a dramatic final to win the Portuguese Cup for the second time in their history, 50 years to the day after their first success.

Defensive mistakes have haunted Porto all season, and the Dragons rearguard was again all at sea, gifting two goals to Braga. But in a repeat of last season's final, Braga were not able to hold on to a two-goal lead, André Silva's brace, the second in stoppage time, cancelling out Rui Fonte and Josué's goals.

Braga fans must have feared cruel heartbreak for the second year running as Porto turned on the pressure in extra time, but they held out and this time won the lottery of the penalty shootout, Marafona producing two fine stops from Herrera and Maxi Pereira to trigger wild celebrations among the Braga coaching staff, players and fans.

Braga were first to threaten, Hassan failing to connect properly from close range as he met a Josué free kick in the 8th minute, but the Arsenalistas did not have to wait long to take the lead. A long ball was punted upfield and Porto centre-back Chidozie and goalkeeper Helton inexplicably stopped and left it for each other, with the grateful Rui Fonte nipping in to lift the ball over the Brazilian stopper and then head into the empty net.

As Porto tried to get back into the game Brahimi and André Silva were asking plenty of questions of the Braga defence, but truth be told goalkeeper Marafona was rarely troubled. The Dragons almost equalised shortly before the hour mark, however, when Herrera's terrific shot from distance whistled inches past the post.

One minute later and disaster struck for Porto as another howler allowed Braga to double their lead. Last defender Marcano carelessly lost the ball and the grateful Josué (on loan from Porto) had the simple task of advancing and steering the ball past Helton.

Porto struck straight back however, as André Silva turned in from point-black range after Marafona had parried Brahimi's shot. The Blue and Whites had half an hour to find an equaliser. Silva forced Marafona into a save and Brahimi threatened, but as the clock ticked into stoppage time it looked like Braga would hold on.

André Silva had other ideas, though, showing superb opportunism and athleticism to score a last-gasp equaliser with an excellent overhead kick.

Just like last season against Sporting, Braga had thrown away a 2-0 lead and conceded the equaliser in stoppage time, and the psychological advantage certainly looked to be with Porto as they bossed the game in extra time. Three times André Silva came close to completing his hat-trick, but Braga held on for penalties.

The Guerreiros do Minho held their nerve, scoring all four of the spot kicks they needed as Marafona's heroics won the Cup for Braga. A sweet day for the northern club was complete as the trophy was handed over by probably Braga's most famous fan, the Portuguese president Marcelo Rebelo de Sousa.

Well done to Braga!!! They have really deserved a major trophy for the huge progress they have made this decade and I'm glad to see them win it. Such has been their progress that I genuinely believe we now have a "top 4" in Portugal instead of...

Well done to Braga!!! They have really deserved a major trophy for the huge progress they have made this decade and I'm glad to see them win it. Such has been their progress that I genuinely believe we now have a "top 4" in Portugal instead of the traditional "top 3". They are an example to other clubs in the Liga that with the right direction, organisation and decisions, real progress can be made. When Porto scored that (superb) equalizer in the last minute, I really thought it was going to be a repeat of last year and that Braga would lose in extra time. Hats off to them for keeping their cool and winning the penalty shoot-out.

As for Porto, well a season to forget and they have to move forward from this. In the few times I've seen them play recently, I came to the conclusion that they are probably the weakest Porto side I've ever seen. This looked particularly evident in the recent home defeat to Sporting, where they really did not look particularly strong in any area: defense, midfield or attack. I said at the time when Lopetegui was sacked, that I thought it was an error by the club and I think this has definitely turned out to be the case. How many points off the top were they when he was sacked? I think it was like 4 or 5 no? Well they simply deteriorated after he left and finished 15 points off the top spot. So that's now zero trophies in the last 3 seasons combined, clearly big changes are needed. Surely Peseiro will be let go, but I actually think Pinto Da Costa is part of the problem, he's been there so long now that he's become like a dictator at the club, but he certainly he seems to have lost his touch in recent years. It looks to me like the club is in need of full scale changes as things usually tend to get stale when they don't happen.

Anyway another fascinating season comes to an end with plenty of talking points. I personally think it ended fairly and appropriately: Benfica deserved the Liga title for their spectacular second half to the season (on top of doing so well in the Champions League) and Braga deserved a trophy for the positive season they had. Roll on next season!!!!

It was a great win by Braga, they played a solid game,even though they only scored off of errors, they pressured at the right times and overall I cant fault them on much.

But I am a porto fan, and I just have to rip into my team. What the hell...

It was a great win by Braga, they played a solid game,even though they only scored off of errors, they pressured at the right times and overall I cant fault them on much.

But I am a porto fan, and I just have to rip into my team. What the hell is wrong with them? Marcano should be shipped off to siberia with that performance. Sure the first goal was a combination of helton, chizdozie and him, but helton and chidozie atleast appeared to make an effort, i didnt see marcano in the replays hauling back to the goal. The second goal i blame all on marcano, i mean really? at one point in the match, there was another ball that no one seemed to wanna touch and josue charged for it, Maxi saw it and atleast body checked him to the ground, it was a fault, but no goal. Marcano could of done the same thing for atleast one of the goals, a yellow card would of been a small price to pay.

Andre, I would have to disagree with you, Lopetegui had to go, he was rotten the team out. We were never going to recover this season, but we needed to stop him before he ruined more of the team. He took over pretty much after we sacked Fonseca and I believe the team at that point was no where near as bad as it is now. The time he has been in charged has seen great players loaned out and sold inexplicably. Josue, Quaresma, Imbula (doing great at stoke, felt like he never got a shot at porto), Reyes, Ricardo Pereira, and others Im sure I cant think of at the moment. Next season if we win some silverware it will be a positive, but I feel its going to be rebuilding time.

For next season, I hope only to see a few defensive signings, I think we are set everywhere else with what we currently have, especially with the loaned out players coming back. I think its time for Herrera to go on to bigger things, He is great, but I feel like we have better. I'm hoping to see an all portuguese midfield Josue, Andre Andre, Sergio Oliveira, neves and danilo, We also getting back otavio so i think we can shed a bit. Striker wise we are also too loaded there, and with Pacienca and Ghilas coming back, even more so. Goalkeepers, its time to pass the guard from Helton, I think he is great, a great leader and I prefer him over casillas, but we are not gonna get rid of casillas, only if casillas himself decides to leave. We are also not gonna keep him on bench, so I think a casillas and Jose Sa combo would be best for future, and let Helton retire.

Well heres looking forward to the Euro now and hoping we do some good moves off season. We are obviously going to get a new coach, and I hope we do at this point, the rumors have already started and that is just gonna ruin the confidence of the coach we already have. I hope pinto da costa gets someone a little more established or get villa boas, no more surprises and googling to figure out who he just signed please

Read More
Danny Costa
There are no comments posted here yet