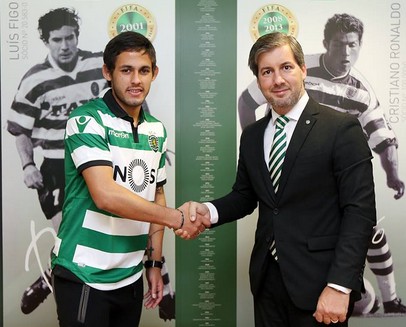 Boca Juniors midfielder Marcelo Meli has joined Sporting on loan for the remainder of the season, the Portuguese club has confirmed.

Meli had spoken candidly about a move to Jorge Jesus’ side prior to today and will be a Sporting player until the end of the season, meanwhile the Lisbon giants can then make the deal permanent by paying the reported €2.7 million fee agreed between both parties.

The Argentine, who can be deployed both as a defensive and centre midfielder, will initially serve as cover for Adrien Silva and/or William Carvalho at a time where Alberto Aquilani’s departure looks increasingly likely and Radosav Petrović’s failure to impress during pre-season has worried sections of the Sporting’s support.

Meli’s transfer sees Jesus revisit an old target of his during his days as Benfica boss, with the Primeira Liga holders attempting to sign the 24-year-old even after their manager’s infamous departure last season.

The Ex-Boca man said his goodbyes to those in Argentina via social media on Thursday before arriving in Lisbon on Saturday morning, where he’s set to be unveiled as a Sporting player in their game versus Wolfsburg.

Meli, who becomes the Lions’ fifth first team signing of the summer, stated to Sporting TV that he’s “very gracious [and] very happy to have joined such a beautiful club,” revealing the importance Boca Juniors loanee Jonathan Silva had in convincing him to make the move to Portugal.