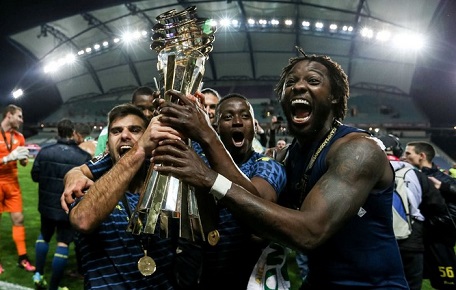 Having left the likes of FC Porto and Benfica behind them in previous rounds, Moreirense last night beat Braga 1-0 in the final of the Taça da Liga (Portuguese league cup) to lift silverware for the first time in their history.

It is a remarkable achievement for one of the more modest clubs in Portugal’s top flight, which is from Moreira de Cónegos, a village with a population of under 5,000 people.

At the start of the new “Final Four” format, whereby the semi-finals and final were played at the same venue – the Algarve Stadium – over five days, Moreirense were very much the underdogs among the four teams, but it would be Augusto Inácio’s men who came out on top.

Here is the story of Moreirense’s triumph.

This past week saw an exciting series of games in the Taça da Liga. Braga took on Vitoria de Setubal, while Benfica looked to continue their impressive run of form against a heavily unfavoured Moreirense side.

Braga continued to impress, displaying another performance that deemed them worthy of “Os três grandes” status.

Pedro Santos, one of Braga’s star performers this season began proceedings with a calmly placed penalty in the 13th minute. Setúbal responded well to conceding early, keeping possession of the ball with confidence and composure and creating a handful of chances. However, Os Arsenalistas never looked overly troubled by Setubal’s efforts and doubled their lead in the 66th minute through Nikola Stojiljkovic. A wayward pass back found Rui Fonte one-on-one with Pedro Trigueira, who could do nothing but watch the former Arsenal man play in his Serbian teammate who calmly placed the ball into the open net.

Vitoria were deflated after the second goal and found it increasingly difficult to maintain possession of any sort. Braga’s dominance was clear, and they put the game to bed once and for all in the 87th with a swift counter attack. A simple penetrating ball out wide found Ricardo Horta in acres of space, who whipped a teasing ball into the 18-yard box which was met by substitute Rodrigo Pinho who finished expertly.

Benfica’s form of late rendered this tie a write-off in most people’s eyes. And given the way the current Portuguese champions started they wouldn’t have been wrong to assume such an outcome. It took Benfica just six minutes to break the deadlock. A slick passing move found its way out to Eliseu, who delivered a peach of a cross which found Salvio who finished past Makaridze with ease. Very little changed after the opening goal, with Benfica cruising into half time at 1-0 without having been tested.

Moreirense came out an entirely new team after the break, immediately levelling the game in the 46th minute. Sporting loanee Francisco Geraldes managed to turn in midfield and played an intricate through ball to Ousmane Dramé, who took it round a helpless Ederson and placed it in the far corner - much to the dismay of Benfica’s centre halves who watched the ball trickle past them.

Augusto Inacio’s men continued to pile on pressure with an onslaught of attacks, none of which caused too much trouble. However, in the 54th minute their efforts were rewarded. The Moreira de Cónegos side won a free-kick 40 yards out which was floated to the far post, and met by Alan Schons who flashed the ball across the face of goal. The ball ricocheted off Ederson and presented itself to Boateng who had the easiest of finishes.

Moreirense didn’t coast from there, they continued to cause Benfica real problems at the back. Boateng was particularly impressive, making life very difficult indeed for the Eagles’ back four with his raw speed, strength and his surprising technical prowess. Their efforts didn’t go uncompensated, as they furthered their lead in the 71st minute. Sporting’s other loanee Podence won the ball in his own half, beat his man with a wonderful display of trickery and played Boateng in on goal - who once more finished calmly past Ederson.

Benfica then became an entirely different team, peppering the Moreirense goal with shot after shot. They were perhaps a tad unlucky not to pull at least one goal back - talisman Jonas hit the woodwork twice in quick succession. However, despite this, the Moreira de Cónegos side produced a truly heroic performance and were undoubtedly worthy winners.

It’s not often in Portuguese football that we get to witness a fairy-tale triumph. Prior to kick-off there was a real sense of belief among many neutrals that the tiny outfit from Moreira de Cónegos would replicate their fine performances against both Benfica and Porto.

As much as many wanted the underdog to perform a miracle, there was no denying that Braga went in as clear favourites. Their results, if not their form of late, had been impressive both in league play and in cup competitions. Moreirense too have enjoyed a marvellous run of form, and had won 4 out of 5 games in 2017 before last night’s match. The game was very nicely poised and had all the makings for a modern-day classic.

The opening 15 minutes of this encounter was fought out almost entirely in the half of the pitch Moreirense were attacking. Despite their dominance, very few clear-cut chances were created – a Geraldes’ free-kick from close range in the 13th minute was the only true moment of danger.

It was evident for all to see that Moreirense were a side brimming with confidence, and their efforts were rewarded on the stroke of half time. Former Sporting man Dramé played a heavy through-ball to the advancing Geraldes, only for the Braga keeper Matheus to slide in and claim the ball. However, whilst doing so his trailing leg clattered the Sporting loanee and the referee pointed to the spot. Brazilian midfielder Cauê stepped up and converted effortlessly. 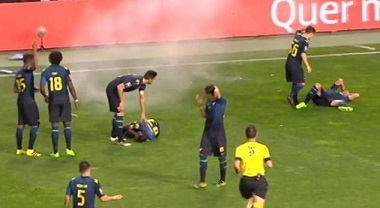 On the run of play the underdogs certainly deserved the lead in what was a fairly non-eventful opening half. Perhaps the most notable incident from the first 45 minutes was the Moreirense players being attacked by flares as they celebrated the goal from a few of the Braga faithful. Two players went down injured after explosions right besides them, but thankfully, after lengthy treatment they could continue.

The second half saw Braga improve, marginally. It was clear there was a little more urgency in their play, but they still failed to really trouble the Moreirense defence. Pedro Santos, as he has done for much of the season, was the only player to impress somewhat. Braga continued to possess the ball, with Moreirense happy to absorb the increasing pressure and play on the break.

Braga failed to register a shot on target until the 82nd minute, when Vukcevic made a great penetrating run down the left flank and found Pinho, whose instinctive shot from six yards out was deflected but saved superbly by Moreirense's Georgian goalkeeper Makaridze.

Moreirense then had to endure incessant pressure from Braga, only to be relieved by an admirable run from substitute and semi-final hero Boateng. The brave men of Moreira de Cónegos ran and defended tirelessly, tenaciously and doggedly for five exasperating minutes of stoppage time to crowned Taça da Liga champions 2016/17.

It is a truly astounding achievement for the club from the very north of Portugal, who lift their first ever trophy in 78 years as a professional outfit. They encountered bits of fortune here and there - but this triumph was by no means a fluke. Overcoming the teams occupying the top three spots in the Liga NOS table at the time they played them highlights the dimension of the achievement.

Moreirense will now lose two of their best players as midfield schemer Francisco Geraldes and nippy winger Daniel Podence have been recalled by their parent club Sporting. Nevertheless, with the astute Inácio at the helm, it will be a surprise if they do not continue climbing the table.

Very insightful piece of writing. The journey of such a small football club like Moreirense is amazing and to win this prestigious cup is astonishing. Great after game report. Throughly enjoyed reading it.

What's up with Braga? They were in a great position to take 3rd spot but a tie to Nacional, then a lose to Guimaraes, now a lose to Moireirense.

Considering who Moireirense beat along the way, this is a fantastic achievement.

What's up with Braga? They were in a great position to take 3rd spot but a tie to Nacional, then a lose to Guimaraes, now a lose to Moireirense.

Considering who Moireirense beat along the way, this is a fantastic achievement.

Braga have looked awful recently. What the heck is happening over there?