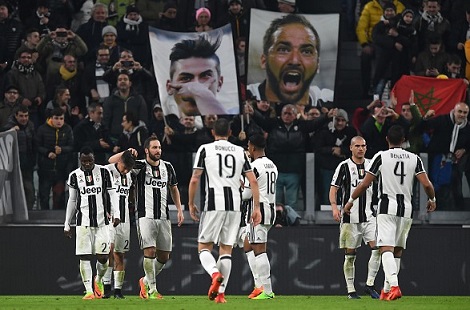 Porto will attempt to take their excellent domestic form onto the European stage in midweek as they welcome Italian powerhouse Juventus to the Estádio do Dragão.

Nuno Espírito Santo’s team have clocked up six straight victories in the past month and are unbeaten this season at home in all competitions (13 victories and 5 draws in 18 matches). However, they are yet to face a team of the quality of Massimiliano Allegri’s side, winners of the last five Serie A titles and Champions League finalists in 2014/15.

Juventus expert Adam Digby, author of “Juventus: A History In Black & White” tells PortuGOAL what the Dragons can expect on Wednesday night.

Juventus look on course for yet another Serie A triumph, but from afar it seems they have not been as dominant as in recent years. Is that fair? How does this Juventus team compare to the sides that got to the UCL final and that ran Bayern so close in the last couple of years?

I think that overall it’s as good as the team that got to the final and probably better than the team that was eliminated by Bayern last term. They have much greater depth and have gotten used to playing without the likes of Tevez, Vidal and Pirlo, which was still very new at this stage last season, while Allegri has been far bolder in his team selection.

I’d also add that without Pogba, the team as a whole has grown. They’re a more cohesive unit without him and are always looking to make the right pass rather than have one player doing his own thing all too often.

Ones to watch - Who are Juve’s star players?

The obvious ones are Gigi Buffon and Gonzalo Higuain. The skipper remains truly great, making crucial saves regularly despite turning 39 last month, while the Argentinian striker is simply deadly. He looks much more of a team player than he did at Napoli and is scoring all types of goals at a frankly astonishing rate.

Outside of that duo, Paulo Dybala continues to mature, while Alex Sandro and Leonardo Bonucci are arguably the best in the world at their positions.

Strong points/weak points – what must Porto beware of and what can they exploit?

The strongest points of this team remain central defence and the attack, simply because of the sheer quality of players Juve can and do field there. Further to what I’ve already said above, this side are deadly at set pieces, with Miralem Pjanic and Dybala providing a right-left combo that’s tough to beat while Higuain, Mandzukic, Bonucci and Chiellini provide a strong aerial threat.

As for weaknesses, I would say the right-back and midfield area, with Stephan Lichtsteiner and Dani Alves both struggling for form. If Porto can get at them down the left and isolate a player one-on-one, that could be a source of goals for them. Same in midfield where anyone other than Claudio Marchisio and Tomas Rincon has looked off the pace all season, with Sami Khedira seemingly well past his sell-by date at the moment.

Formation and playing style – what system do Juventus usually play? Would you describe them generically as an attacking or a defensive team?

They’ve been playing 4-2-3-1 of late, with Juan Cuadrado, Dybala and Mandzukic lining up behind Higuain. The Colombian and the Croatian drop back to make it a 4-4-2 defensively and ensure the team aren’t overrun in midfield but it’s definitely made them more attacking. Surprisingly it’s also improved their defensive record, with the team conceding just twice in the seven games they’ve played since making the switch.

Mood in the camp – judging by player/coach quotes regarding this game, do you think Juventus come into the tie in a confident frame of mind?

Both the players and the press are confident Juve can progress, seeing Porto as a favourable opponent while the obvious re-match between Buffon and Casillas has been getting a lot of play. I’d say the team are confident, but a January loss to Fiorentina means they’ve also suffered a recent bump that has stopped that edging into complacency.

What do you think the result of the match will be?

I think Juve will likely emerge winners by a two-goal margin over the two legs, largely because I think their front six are just too strong for Porto.

Related: How Porto's focus on young talent is reaping rewards

Has anyone else being watching Juve play? I agree with the author of this piece, I find this team better than last years or any squad over the last five years for that matter.

When your weak links are Stephan Lichtsteiner and Dani Alves you are...

Has anyone else being watching Juve play? I agree with the author of this piece, I find this team better than last years or any squad over the last five years for that matter.

When your weak links are Stephan Lichtsteiner and Dani Alves you are in good shape.

Juan Cuadrado and Pepito have been lights out and I find their squad more balanced and able to adapt to any conditions or play any style.

The loss to Fiorentina is not exactly a huge upset either, Paulo Sousa’s team are good and were unlucky vs Milan this weekend.

Porto is going in with a red hot Cassillas and scoring fantastic goals recently (Ruben Neves screamer). Unlike the other squads in Portugal, Porto seems to be getting better with a huge ceiling as to their potential.

To also link this to the article Tom wrote about Porto’s youth. I think it’s a good thing Porto have so much unproven/youth in their squad. Juve won’t know what to expect and neither do the neutrals really. We could see another win like the one Jackson and Quaresma inflicted in Bayern or we could see them implode. Who knows. Over two legs can Porto beat whom I think is the best team in world football? Maybe not but can they cause damage at home? Sure they can.

You know you are doing something right when Benfica starts whining to loudly you can hear them all the way over here in Canada. I hear the azeitao cheese is especially delightful with wine, someone should send some to LFV and his cronies and apparently some of the easily manipulated fanbase as well.

Well, this might sound shocking, but I disagree a bit with some of these prognostications.

Great piece, and some excellent points regarding the cohesiveness of the Juve team. However, I disagree that the front 6 are "too much for Porto". They...

Well, this might sound shocking, but I disagree a bit with some of these prognostications.

Great piece, and some excellent points regarding the cohesiveness of the Juve team. However, I disagree that the front 6 are "too much for Porto". They are no where near as deadly as it sounds here, being only the 3rd highest scoring team in Italy, despite being on top of the table. Does this mean they are incapable of goalfests? Of course not. They just ran riot over Palermo this weekend. But they have difficulty against well-organised defences.

In fact, Napoli have a much more potent offence in Italy at the moment than do Juve, the major difference being defence, as Juve's back line is quite good. I have seen a few of Juve's games this season (both Series A and CL), and they struggle when pressured a bit higher into their midfield.

They were incapable of breaching an Inter defence which is awful, only being able to score 1 goal from outside the box. They also struggles against AC Milan in all their clashes (league and cups), either losing or wining by a single goal.

Their Champions League play has been decent, but not as crisp as 2 years ago, with Pirlo's incisive passing really missing. Khedira is awful most of the time, while Marchisio is decent but prone to losing concentration from time to time.

Alex Sandro is a beast, but I place him behind David Alaba, Luis Felipe and even Marcos Alonso in the LAB role. That said, he is one of the biggest loses to Porto in the last few seasons.

I think Juve are right to be favourites, but I am not picking them to progress. I believe that Porto is starting to gather form at exactly the right time, and while they are much more inconsistent in the CL than Juve have been this season, I see them as a more lethal squad when they are on song.

Anyone who has seen the offensive output from Andre Silva, Brahimi (when in form), Jota and Corona would be remiss to count Porto out against anyone at this point.

I'm picking Porto to progress by one goal over the 2 legs with Juve giving them all they can handle.

Cheers, and ease don't let my own views dissuade from this fantastic series of articles.

Well, no doubt about it, not a good result. Alex Telles was an idiot, no doubt, but Juve's 12th man, I mean the ref, had no hesitation whatsoever handing out cards.

Many will write Porto off, but I still see some fight left in this young team.

Well, no doubt about it, not a good result. Alex Telles was an idiot, no doubt, but Juve's 12th man, I mean the ref, had no hesitation whatsoever handing out cards.

Many will write Porto off, but I still see some fight left in this young team.

Also, it's always a joy to see the classy Benfica fans come out with "mama Porto", or "Porco" comments after the match. If you check some of the Portuguese sites such as abola, record, etc. you will see some very well-educated, erudite fans of Lisbon's red half spouting their usual love letters to their northern neighbours, but frankly it's to be expected.

I am sure Andre or Jon will pipe up soon with some more of their "Porto corruption" chats just to keep things classy on behalf of Benfica fans on this site as well.

Forca Porto, it's not over til the Old Lady crumbles.