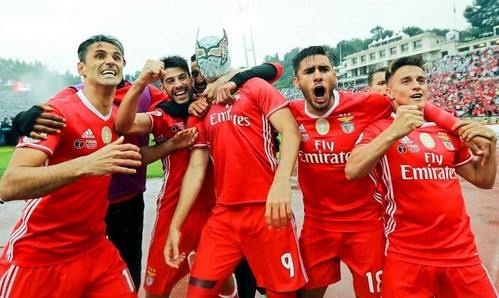 Two goals in quick succession shortly after half time by Raul Jiménez and Salvio saw Benfica beat Vitória de Guimarães 2-1 to lift the Portuguese Cup and complete the double in 2016/17.

After a fiercely fought and even first 45 minutes, Benfica put in a strong second-half performance that proved too much for Vitória, despite Zungu pulling a goal back and a valiant effort by the northerners.

With 14,000 fans having travelled from the Portuguese city of Guimarães filling one half of the stadium, and the other half painted red by Benfica fans who made the short trip from Lisbon, the Jamor national stadium provided a suitably magnificent setting for the traditional season-ending showpiece.

Benfica coach Rui Vitória kept faith with Mexican striker Jiménez who has been the preferred choice over Mitroglou in recent weeks, while his opposite number Pedro Martins pulled a couple of surprises by selecting Raphinha instead of David Teixeira and opting for Miguel Silva in goal.

The Eagles started strong favourites. On top of the 5-0 victory in the league encounter just a fortnight ago, a highly successful four-year period has helped Rui Vitória's team dominate the betting odds for football in Portugal in recent times.

There was no quarter given in an aggressive first half which saw Benfica's Fejsa and Vitória's Hurtado forced off through injury. Vitória right-back Bruno Gaspar was enjoying a storming match, preventing the normally offensive Grimaldo from venturing up the pitch with a series of penetrating raids. Nevertheless, chances were at a premium, with Miranda and Hernâni going closest for Vitória, while Luisão had Benfica's best chance, heading a well-delivered Pizzi free kick wide.

It was all change in the second half as Benfica grabbed control of the game with two goals in quick succession. Jonas had been anonymous in the first half, but the Brazilian at last found some room in the 48th minute to take aim from 25 yards out. His shot was too hot for Miguel Silva to handle, and Jiménez pounced onto the rebound and cheekily dinked the ball over the keeper into the net, before donning a superhero mask and running off to celebrate wildly in front of the Benfica fans.

One-nil soon became two-nil as Jonas spread the ball to the overlapping Nelson Semedo, whose cross was met meatily by the diving head of Salvio, the ball thumping into the back of the net.

With Vitória reeling, Benfica created a series of chances to augment their lead, the best of them coming back off the bar from Jonas after Grimaldo had played a wonderful one-two and crossed onto the striker's head.

With Vitória forced to push men forward and leave spaces at the back Benfica continued to look the more likely to score, but Pedro Martins' side got right back into it in the 79th minute. Only a miraculous last-ditch interception by Samaris prevented Vitória from scoring, but it was only a temporary respite because from the resulting corner Zungu powered a header into the net to make it 2-1.

However, Vitória were unable to fashion more chances, while Benfica missed excellent opportunities to kill the game through Pizzi, Salvio and Jiménez, and as the final whistle went it was the Benfica fans who were celebrating.

by Tom Kundert, at the National Stadium, Jamor