Bruno Xadas announces himself in style 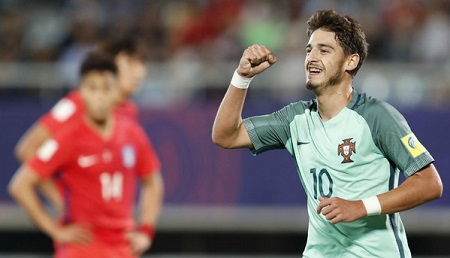 Sporting, Porto and Benfica all won their second successive match in the Liga NOS, although all three were made to work hard for 1-0 victories.

Porto beat Tondela thanks to a first-half goal from the rejuvenated Vincent Aboubakar. Sporting left it late against Vitória Setúbal, needing an 86th-minute penalty committed against and converted by Bas Dost to collect all three points. Benfica left it even later, with impressive new centre-forward Seferovic scoring a stoppage time goal to beat a spirited Chaves side.

This week’s figure of the week goes to Braga’s exciting new find, Bruno Xadas, whose magnificent goal (see video below) sparked a comeback win for the Arsenalistas against Portimonense.

Figure of the week: Bruno Xadas

Bruno Alexandre Vieira Almeida, commonly known in the football world as Bruno Xadas (a family nickname passed down from grandfather to father to son) is one of the most exciting emerging talents in Portugal.

Blessed with a dreamy left foot, Xadas has instant control, excellent dribbling skills, the vision for a killer pass and a keen eye for goal. Playing as a wide midfielder or more centrally, it is his ability to hit the net on a regular basis that has seen the 19-year-old make a meteoric rise for Braga.

Xadas scored 11 goals in 30 matches from midfield in Portugal’s second tier for Braga B last season, earning him the chance to make his debut for the senior team at the tail end of 2016/17 (4 appearances), and a call-up to Portugal’s U20 World Cup squad, where he outshone all his teammates, especially when scoring a brace against hosts South Korea.

Braga coach Abel Ferreira managed the B team last season before being promoted to take charge of the seniors upon Jorge Simão’s dismissal, so he is all too aware of Xadas’s qualities. Abel has immediately made the teenager a regular starter and the player has responded by looking Braga’s best performer – quite a feat considering Braga’s varied array of attacking talent, such as Portugal internationals Ricardo Horta and Rui Fonte, and experienced Liga NOS campaigners Wilson Eduardo and Ahmed Hassan, to cite just a few names in a high-quality squad.

Braga as a team are yet to fully click under Abel, who is attempting to turn the northerners into a more attack-minded unit in contrast to Simão’s safety-first approach. It is Xadas who has done most to drive the team forward, and it was a moment of magic from him that turned Sunday’s encounter in the home team’s favour after visitors Portimonense had dominated the first half at the Quarry.

Xadas had already gone close with a fierce shot from range, but the Algarve side did not heed the warning – or were powerless to stop him. On the stroke of half time, picking up the ball on the top of the box to the right, Xadas worked room for himself before unleashing an unstoppable 20-yard left-footed effort that rocketed into the net with Portimonense goalkeeper Ricardo Ferreira rooted to his spot. Watch the goal below:

Braga improved considerably after the break and would go on to win 2-1, with Abel reserving special praise for Xadas in the post-match interview: “A Braga player has to take the initiative, take risks and do what Xadas did. We need these types of players.” He may have fewer than 10 senior appearances under his belt, but Xadas is already on the radar of Portugal’s Big Three and major clubs around Europe according to ABola.

An unusual name he may have, but if he continues in this vein it’s sure to be one that will soon be known far and wide in the football world.