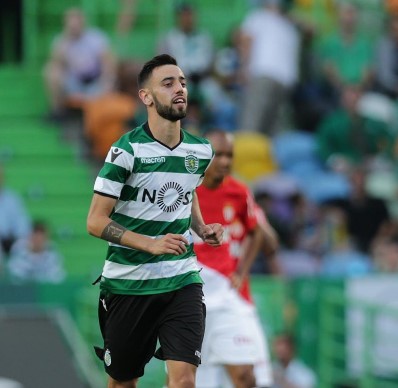 No let-up from front four

A theme of this nascent season is the way the Big Three are intent on imitating each other. After Benfica, Porto and Sporting all struggled to 1-0 wins in the second round of matches, in Round Three the traditional title candidates all thrashed their opponents, with star strikers Jonas, Aboubakar and Bas Dost among the goals.

Rio Ave are keeping up the pace, their 2-0 home win over Portimonense making sure the Vila do Conde side remain in the leading pack, also on 9 points after three games.

It sets up an exciting programme next week, with Rio Ave and Braga hosting Benfica and Porto respectively in the last round of matches before the international break. PortuGOAL rounds up the action and this week's Figure of the Week turns the spotlight on Bruno Fernandes.

Sporting had apparently the most difficult task, travelling to Guimarães where they had not won in the previous four seasons. A 5-0 thrashing for the away side was therefore a big surprise, with midfielder Bruno Fernandes scoring two thunderbolts from distance, Bas Dost bagging a brace and captain Adrien rounding off the victory.

Cameroonian striker Aboubakar is living up to the immense promise he showed when he first arrived at Porto. The powerful front man was in the shadow of Jackson Martinez in his first season at the Estádio do Dragão, but still managed to impress on his few opportunities, and it was a surprise when, upon Jackson's departure, the then coach Julen Lopetegui rarely used the forward and he was loaned out to Besiktas. While in Turkey, Aboubakar said he had no intention of returning to Porto, but new coach Sérgio Conceição persuaded him otherwise. Goals galore have followed and a hat-trick against Moreirense on Saturday gave the Dragons a comfortable a 3-0 win.

Aboubakar is joint leader of the goal-scoring charts in Portugal, alongside Benfica hitman Jonas. The irrepressible Brazilian was in magnificent form as the champions swatted aside the weak challenge offered by Belenenses to record a thumping 5-0 win in Lisbon. Jonas scored a hat-trick and has four goals for the Eagles. It could have been more as the 33-year-old was denied what he later said, "would have been the best goal in my career" by the woodwork with an audacious attempt from the halfway line. Seferovic and Salvio scored Benfica's other goals.

Rio Ave continued their perfect start to the season thanks to second-half goals from Barreto and Guedes. Miguel Cardoso's men have three straight wins and will surely give Benfica a stern test next week. Are you in a winning mood? Try you luck at https://www.lapalingo.com/en/online-casino-games.

Elsewhere, Braga made it four straight wins in all competitions with a 2-0 win at Aves, while Estoril made it two wins in the row (scoring six goals in the process) with a 3-2 triumph at Aves. There were home wins for Marítimo (v Boavista) and Feirense (v Paços de Ferreira), while Vitória Setúbal and Chaves shared the points.

Figure of the week: Bruno Fernandes

Bruno Fernandes has had an unusual career path. Moving to Italy as a 17-year-old, the classy midfielder was a regular over four seasons in Serie A, for Udinese and Sampdoria. His constantly bright performances were recognised in his homeland and he became a vital member and eventually captain of Rui Jorge's extremely successful Portugal U21 side.

It was a surprise that no big club made a move for him, until this summer when Sporting paid €8.5m for his services, and all the evidence so far suggests it was money well spent. With Euro 2016 winners and Portugal internationals William Carvalho and Adrien the natural occupants of the central midfield area, Fernandes has had to be patient as he waits for playing time and has had to be flexible with his position.

A natural "Number 8" thanks to his quick thinking, intelligent positional play, creative passing and dangerous long-range shooting, coach Jorge Jesus has used him as a support striker so far this season, given that if fit and available, club captain Adrien occupies the Number 8 position.

Nevertheless, Fernandes has made the most of his chances, shining brightly in pre-season and always making a positive impact when called off the bench. He started on Saturday at Vitória Guimarães, and got the ball rolling for the Lions with a stupendous strike in the 3rd minute, making room for himself and slamming in an unstoppable rocket of a shot from 30 yards.

He followed that up with another super strike in the second half. See below:

Fernandes refused to hog the plaudits after the match. "We have a united squad and our collective attitude was essential for this victory. Sporting put in a perfect display, and when that happens it's normal that individuals can shine."

With speculation continuing to rumble on about Adrien's future, Sporting have a ready-made replacement if and when their captain moves on, both in terms of his quality on the pitch and his natural leadership.

Moreover, despite Portugal's fabulous array of midfield options, if Fernandes builds on his strong start to his Sporting career, he may well find himself on the plane to Russia as part of Fernando Santos's squad at next year's World Cup.

Bruno Fernandes is an incredible player! He's been fantastic for years and when Sporting signed him I was really impressed and happy! Its great for both Sporting and Bruno Fernandes! He'll definitely get more plaudits and recognition now and as...

Bruno Fernandes is an incredible player! He's been fantastic for years and when Sporting signed him I was really impressed and happy! Its great for both Sporting and Bruno Fernandes! He'll definitely get more plaudits and recognition now and as Sporting has qualified for the Champions League even better! Bruno Fernandes has been awesome for us! He's an incredible playmaker and capable of finishing well too! The guy is awesome and very close to being on the senior national team too in my opinion.

I haven't commented in a long while just been so busy. But I gotta say Sporting have done really well in assembling the squad this season! Very happy with the team that we have and looking forward to the season! We're doing great and lets keep it up Sporting!