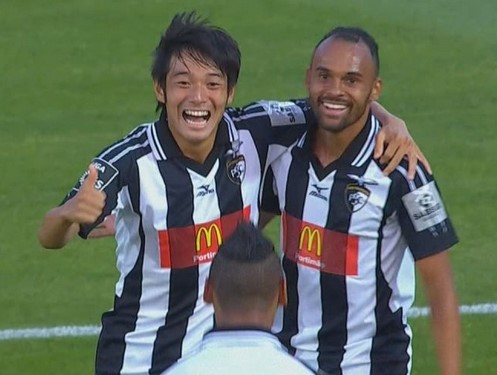 New star in the Liga NOS

23-year-old Japanese winger Shoya Nakajima hasn’t been in Portugal for very long but has already made a noticeable impact for newly-promoted Portimonense.

The exciting new addition to the Primeira Liga is PortuGOAL’s Figure of the Week for Round 6 of the Liga NOS.

Jamie Farr explains why Nakajima is one to keep a close eye on.

I watched him come off the bench at half time in Portimonense’s Taça da Liga victory over Chaves earlier in the month, and he immediately stood out, albeit with the opponents down to 10 men for the second period.

Incisive passing combined with positive runs both direct and wide gave Chaves many problems on that day and the performance was enough for Vítor Oliveira to reward him with a start against champions Benfica in the next Primeira Liga match.

Not overawed by the big stage

Not intimidated by the occasion, Nakajima gave another impressive performance at Estádio da Luz as the Algarve side were very unfortunate to come away with nothing after a narrow 2-1 defeat. He gave the usually reliable André Almeida many issues on the night with his pace and determination, and caught his opponent in possession before setting up Brazilian Fabrício for the opening goal.

However, it was Monday night’s victory over a good Feirense side that has given us the most obvious example of his talent, his brace securing a 2-1 victory. To bet on Nakajima adding to his goal tally and other options go to Betway.com.

Nuno Manta’s Feirense have been an impressive outfit ever since the young coach took over last winter but his organised side struggled to live with Nakajima’s quick feet and nimble movement. He opened the scoring after just 12 minutes, finding space in the box before firing a deflected effort past Caio Secco.

Just seven minutes later it was 2-0, this time a lung-busting run through the middle was rewarded with a good lay-off from Fabrício, with whom he looks to have a great understanding already, and Nakajima coolly chipped the unrushing goalkeeper to double the advantage.

To watch the goal click on the play button on the screen below:

Nakajima is right-footed by nature but prefers to start on the left flank and cut inside and cause problems centrally, as his second goal illustrates. However, his first, although deflected, shows his aptitude with his left foot as well, a level of versatility that has proven valuable so far for Vítor Oliveira in his three competitive matches.

Clearly it’s early days for Nakajima in Portugal, and perhaps he still needs time to build up his stamina and physicality to reach such high levels week in, week out. His diminutive size, standing at just 5ft 4ins, is arguably a plus though as it marries well with his high technical ability and offers a low centre of gravity to aid his dynamic runs and changes of pace.

Nakajima was on the radar of a number of European sides since his performances for Japan at the 2016 Olympic Games in Brazil. Reportedly Spanish side Tenerife battled with Portimonense for his signature from FC Tokyo. The Portimão side won out with a season-long loan deal with an option to buy, which on current evidence will be activated at the soonest opportunity. Likewise, he certainly has the potential to build on his youth caps with the national team and become capped at senior level in the not too distant future.

For FC Tokyo he was regarded as one of the most exciting players to watch and praised for not only his skill and ability but also his consistency at delivering an effective final ball, a property often sorely lacking amongst even the most talented of playmakers in Liga NOS and world football alike.

After an electric start, it seems only a matter of time before Os Três Grandes take notice of Nakajima, but here’s hoping he can continue his development at what is an improving and entertaining Portimonense side, and not make the big move too soon like many before him.

piknu
This comment was minimized by the moderator on the site

I don't know that he is playing for Portimonense.