Goalless in the first clássico of the season 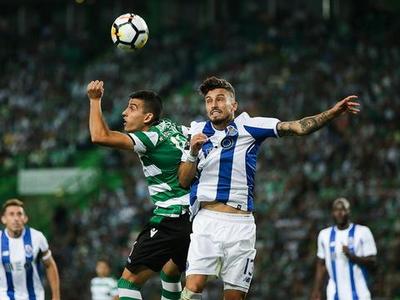 Porto stay on top of the league as both sides shared the points in a scrappy but entertaining first clássico of the season.

Porto had the better of the first half, in which only Rui Patrício and the crossbar stopped the visitors from scoring.

Sporting improved in the second half but neither side could break the deadlock, giving Benfica a chance to gain ground against Marítimo.

In the clash between the top two teams in the Primeira Liga at Alvalade, Sporting were without Fábio Coentrão who wasn't fit in time after playing in Sporting's narrow defeat to Barcelona midweek. Jonathan Silva started in his place at left-back and elsewhere Bas Dost started ahead of the injured Seydou Doumbia.

Sérgio Conceição made one change from his team's impressive win against Monaco in midweek, Miguel Layún starting ahead of Ricardo Pereira.

It was Porto who began on the front foot with Sporting struggling to create any chances. Yacine Brahimi and Vincent Aboubakar in particular were causing Sporting problems in defence, while at the back Danilo Peirera and Felipe were imperious for the visitors.

Rui Patrício needed to time his challenge perfectly as Aboubakar was through with just the goalkeeper to beat. Patrício just managed to get his hands on the ball to prevent a certain goal.

Just after that Sporting had their first attempt of the half as Bruno Fernandes crossed and the ball came off William Carvalho's shoulder, forcing an intervention from Iker Casillas.

Just before half-time Porto had an even better chance, Alex Telles' deep cross found the head of Marega and his effort bounced off the bar. Aboubakar's attempt to convert the rebound was stopped by an instinctive save by Patrício.

The game was a more even contest after the break. Gelson Martins switched to the left-hand side and was immediately more of a threat.

Sporting's best chance of the game came just before the hour mark when Bruno Fernandes robbed Danilo and should have opened the scoring but his shot went way over the bar.

Sporting grew as the game continued but Porto had an excellent chance to open the scoring in the 80th minute. A quick throw from Brahimi caught Sporting off guard. Otávio crossed low for Marega but Patrício was quick to react and again saved Sporting.

Porto had one final chance before the end of the game as William Carvalho gave away a freekick on the edge of the box. Miguel Layún struck the ball well but nothing was going to beat Rui Patrício today.

Both sides will feel they could have won this game so there will be plenty of frustration, especially from Porto who certainly had the chances to do keep their 100% win record. Instead both sides drop points but remain undefeated in the Primeira Liga

Well played Porto. Brahimi, Telles, Danilo and the CB’s having good games. Telles kept Martins quiet but also managed to get forward and support Brahimi who was dangerous until they closed him down more in the second half. It was a game of the...

Well played Porto. Brahimi, Telles, Danilo and the CB’s having good games. Telles kept Martins quiet but also managed to get forward and support Brahimi who was dangerous until they closed him down more in the second half. It was a game of the DM’s as Carvalho/Danilo both stood out but as usual Patricio was quality. Marega didn’t push his intensity onto the defence or boss them, maybe staying too wide at times to open up the gaps in the middle yet I feel Porto played the better game and were the better team.
I underestimated Coates/Mathieu (both of whom have been have periods of poor form at previous clubs) but where was Fernandes? The game cried out for him to dominate but I guess he isn’t ready yet.
A good result for Benfica but Porto’s confidence is high and for me, they are the team to beat.