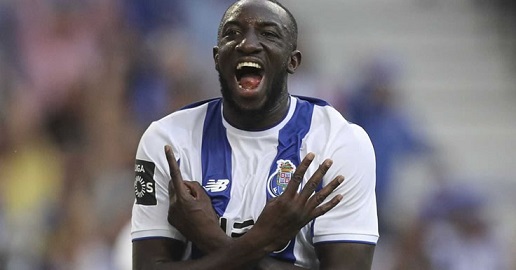 Week 9 of Liga NOS saw a barrage of goals as top two sides Porto and Sporting blasted their way to emphatic victories, winning 6-1 and 5-1 against Paços Ferreira and Chaves respectively.

Porto stay top of the division with their win, which saw two goals from Moussa Marega, who is PortuGOAL’s Figure of the Week. Jamie Farr explains how the Malian striker has transformed himself from a figure of fun to a vital cog in Porto’s ultra-attacking team.

Marega has often been a divisive and at times controversial figure during his spell in Portuguese football, his temperament sometimes getting the better of him and leading to questions regarding his attitude.

He first joined Porto from Marítimo in January 2016, but had a torrid six months in José Peseiro’s underperforming team and was made a target for booing by the home fans at the Estádio do Dragão. An impressive loan spell at Vitória Guimarães in 2016/17 followed, but when he returned to Porto this summer, few could have anticipated the impact he would make under Sérgio Conceição.

From bench to starter

Conceição himself seemed to intimate early in the season that the Mali striker would have limited opportunities, and another departure seemed likely for a player who hadn’t been able to prove himself in the Blue and White of Porto. He began the league season on the bench but was quickly introduced to the fold after an injury to Tiquinho Soares, replacing him during the opening day victory over Estoril.

Marega hasn’t looked back since. As well as coming off the bench to score the opening goal in the aforementioned match, he has registered a fine total of 7 league goals in 9 matches this season.

His brace against Paços typified his form, first showing confidence to coolly slot past Felgueiras to put Porto 3-1 up.

He then showed great anticipation to prod home from close range for his second of the game shortly after.

Despite Porto hitting Paços for six on Saturday night, in truth the Dragons could have had even more goals, Marega himself was denied a hat-trick after the break, although Mexican winger Jesús Corona was there to tap in the rebound.

Soares, who many believed would be Porto’s main striker this season, continues to recover from injury and the Brazilian will have a huge task on his hands when he returns to reclaim his previously untouchable position in the Porto XI. Only Benfica’s Jonas has scored more than Marega in the league campaign, and he is tied with Sporting’s Bas Dost and his own strike partner, the equally-impressive Vincent Aboubakar.

On the subject of Aboubakar, the African pairing have made a superb double act for Porto at the beginning of this season. Marega has shown equal aptitude to not only play alongside the Cameroon forward, but to also start closer to the right wing and stretch opponents with his pace and power. This was particularly evident in Porto’s recent stunning win away to Monaco, with the pair combining to devastating effect on the counter-attack for the second goal of the night.

Ridiculed in some circles for a somewhat unrefined style, Marega has resoundingly hit back at the doubters this season. He gives Conceição terrific variety in attack, to have that option of playing him centrally in a more traditional 4-4-2, or on the right side of a 4-3-3.

The latter capacity has often seen Corona confined to a role from the bench, as well as Brazilian midfielder Otávio, which is a clear indicator as to the depth of the Porto squad this season, and one of the reasons they look favourites to end Benfica’s four-year domination of the league.

. Marega has shown equal aptitude to not only play alongside the Cameroon forward, but to also start closer to the right wing and stretch opponents with his pace and power. This was particularly evident in Porto’s recent stunning win away to...

. Marega has shown equal aptitude to not only play alongside the Cameroon forward, but to also start closer to the right wing and stretch opponents with his pace and power. This was particularly evident in Porto’s recent stunning win away to Monaco, with the pair combining to devastating effect on the counter-attack for the second goal

This has been key. The mister has options with Marega, which he switches as the match goes on depending on what is happening - Winger, wide-forward, second striker or leading the line. Marega’s intensity defending from the front and breaking forward quickly has been a big part of Porto’s attack this season but when his levels drop – as we saw against Leipzig at points – the system doesn’t work as well and this creates holes for the opposition to exploit. I think the thing that has surprised me has been the amount of goals he’s scored so far.
The mister knows what he is doing. I’ll be interested to see how he sets them up v Leipzig next week after seeing them up close.