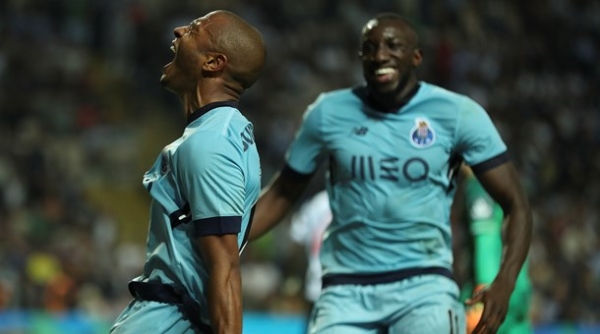 It isn’t uncommon for the bigger teams in the league to take their eye off the ball at this stage of the season, as the likes of FC Porto, Sporting, among others, readied themselves for a decisive week of continental football.

Benfica were able to allay such fears through Jonas’s sole goal in a 1-0 win at home to Feirense, with Sporting also matching the same score-line through Bas Dost’s late winner against Rio Ave on the road.

Porto would go on to conclude their business in a far more convincing fashion, despite also encountering their struggles in a 3-0 victory versus Boavista in the Invictus Derby to maintain the scenario at the top of the Liga NOS table. As always, PortuGoal takes you through this weekend’s action.

With the Eagles still a long way away from hitting their stride, Feirense’s visit to the Estádio da Luz presented yet another must-win encounter for the third-placed outfit to get their teeth into.

Benfica looked to draw inspiration from Jonas early, who’d pull a big save out of Caio in the 10th minute when stroking Diogo Gonçalves’ cutback on target for the Feirense shot-stopper to tip over the bar.

Less than a minute later, the Brazilian talisman would be off celebrating after reacting first to a loose intervention by the goalkeeper and poking the ball into the back of the net, giving Benfica a 1-0 lead.

Speculative efforts were just about all Feirense could muster to trouble the goal of young Mile Svilar, as the hosts took their slender lead into the second period.

More big saves from Caio denied the likes of Eduardo Salvio and Diogo Gonçalves from amplifying the score before Haris Seferovic was able to evade the keeper, but also the goal with a dangerous effort into the side-netting in the 87th minute.

Just the one goal would prove enough for Benfica to wrap up back-to-back wins, with Rui Vitória’s men next in action away to Vitória de Guimarães, following the Champions League interlude.

Only Porto had managed to leave Vila do Conde as a visiting team with all three points this season, therefore Sporting knew they’d most likely be hard-pressed for a win from the outset.

The forecasts were accurate, with Rio Ave dominating possession throughout large spells of the early exchanges and creating the first bit of real danger for Rui Patrício’s goal in the 32nd minute, with the latter tipping João Novais’ header over the bar in acrobatic fashion.

Jérémy Mathieu’s injury promised further complications for Sporting on the night, with Jorge Jesus’ men heading into the half-time break with a goalless draw.

The Lisbon outfit would require the expertise of their goalkeeper once more at the beginning of the second period, with Patrício reacting well to a searching strike from range by Oscar Barreto.

Bruno Fernandes saw his composed finish chalked off in the 68th minute with a little hand from the Video Assistant Referee, as Sporting’s struggles continued into the latter stages of the game.

In the meantime, Rio Ave got closer and closer to glory, as Nuno Santos floored Patrício with a fierce low strike and Hélder Guedes could only balloon the follow-up over the bar from close range in the 84th minute.

Awakening the beast within, Sporting would make full use of their next Rodrigo Battaglia-driven attack, no more than a minute after Guedes’ miss, by breaking the deadlock through Bas Dost’s header into the far corner.

The Dutchman’s 11th hour winner would amount to all three points for the Lions at the game’s conclusion, thus placing them back on top of the league table prior to Porto’s clash with Boavista on Saturday night.

With their position at the top of the table in danger, Porto were tasked with defeating their local rivals in the hotly-anticipated Invictus Derby, hosted by Boavista’s Bessa Stadium.

The Black Panthers were able to go toe-to-toe with their rivals in a fairly cagey affair, as the first half closed to the sound of a 0-0 draw.

Porto were able to rectify that come the early knockings of the second period, however, with Yacine Brahimi’s weighted pass across goal finding Vincent Aboubakar unmarked and with an open goal to tap into in the 50th minute.

Mateus, Idris and Héctor Herrera all intensified the search for the game’s next goal at either end before Malian striker Moussa Marega followed Aboubakar onto the scoresheet in the 80th minute, poking his shot out of reach of the home goalkeeper Vagner from the top of the box.

Brahimi concluded the encounter with Porto’s third goal of the game, bursting through on goal and picking his spot in the 85th minute, as the Dragons returned to their post at the top of the table at full time.

Missed the Porto game but Benfica gave a real flat performance and lets face it - Feirense should have won. They had at least 3 opportunities that a decent striker would have buried - Jonas certainly wouldn't have missed. Feirense looked the more...

Missed the Porto game but Benfica gave a real flat performance and lets face it - Feirense should have won. They had at least 3 opportunities that a decent striker would have buried - Jonas certainly wouldn't have missed. Feirense looked the more mobile and likely to do something whereas Benfica were too one-paced. To me it looked like a coaching problem or attitude rather than ability as they showed signs they could step it up when they chose to. Is Vitoria too defensive? It took the goal to make Feriense realise they could win the game.
Gonçalves and Grimaldo caught the eye but Filipe Augusto was lucky to stay on the pitch with the amount of fouls he committed - the ref was generous, even though he decided to book a Feirense player first…
I fear that if Benfica play like this at Old Trafford it could get ugly though bizarrely also I don't think a win is beyond them.
A real dull team to watch at the moment though. In need of a classy number 10 and some vertical play

“Congratulations Cristiano, on reaching your FIRST 100 goals for the Seleção.”

(Ex Seleção striker and teammate of Ronaldo's, upon CR7 reaching a century of goals for the national team)