PortuGOAL Figure of the Week: Jonas 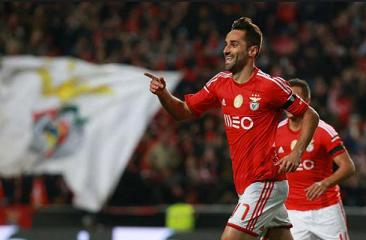 Liga NOS football finally returned after three-week break, bringing with it a new life in the title race as league leaders Porto unexpectedly dropped points to promoted Aves. Lisbon sides Sporting and Benfica took advantage with wins over Paços Ferreira and Vitória Setubal respectively to close the gap at the top of the table.

The latter’s result was an emphatic 6-0 win, with two more goals from the league’s top scorer Jonas, who in the process brought up a century of goals for the defending champions. The Brazilian forward is PortuGOAL’s Figure of the Week.

33-year-old Jonas shows no signs of slowing down as his brace on Sunday took him to 15 league goals in 2017/18. Already six goals clear of his nearest rivals, Porto’s Vincent Aboubakar and Sporting’s Bas Dost, ‘Pistolas’ has made a great start to his quest for the Golden Boot, looking to add to the one he obtained at the end of the 2015/16 campaign.

Will Jonas finish top of the scoring charts in Portugal again this season? If you believe so go to NetBet Sport to wager on that and other sports results.

During his time in Portugal Jonas has plundered in the goals with great consistency but also with eye-catching variety too. Long distance strikes, delicate chips and pure lethal striker’s finishes have been on display since 2014 and it was the latter that was showcased in the demolition job at Estádio da Luz. His first goal was was about as brutally simple as it gets, rising highest to bury a header from Pizzi’s corner.

That goal was number 100 in the red of Benfica, and it was followed by his 101st in the second half. André Almeida’s flicked header fell his way and Jonas swivelled to thrash in an unstoppable strike to make it 4-0.

A record of 101 goals in 131 games in all competitions is staggering in anyone’s book but made all the more impressive by virtue of Jonas arriving for nothing from Valencia back in 2014, surely ranking him as one of the very best free transfers of recent times. He had fallen out of favour with the Spanish side, ironically then managed by former Porto coach Nuno Espírito Santo.

During his time with the Lisbon club, Jonas has primarily operated in a two-man strike force and has done so to great effect with the likes of Rodrigo Lima and Kostas Mitroglou, while currently being paired with either Haris Seferovic or Raúl Jiménez. Whoever his partner, the Brazilian has remained consistent in winning the domestic title in each of his three completed seasons with the club.

If there is one question mark to Jonas it is one that can be levelled at his club too, particularly this season, and that is something of an underachievement on the European stage. Granted in Jonas’ case, he was ineligible for the group stages of 2014/15 and injured in 2016/17, but his Champions League record for Benfica reads at a comparatively meagre two goals from 12 starts (15 appearances in total). This time around he was unable to stop his side from exiting Europe altogether in dismal fashion after five straight defeats thus far.

Jonas is now entering the latter stages of his career but his enjoyment of the club and the game clearly still remains, as does the fact that he is one of most feared players in the country.

I like Jonas. He could do with someone decent alongside him to work with though.
Guaranteed to score this Friday but hopefully not!

Yes, what a bonus of a signing Jonas has turned out to be for the club, and surely one of the very best free transfers ever made by any club. I remember when he joined us in the late summer of 2014, thinking he would be a welcome and useful...

Yes, what a bonus of a signing Jonas has turned out to be for the club, and surely one of the very best free transfers ever made by any club. I remember when he joined us in the late summer of 2014, thinking he would be a welcome and useful attacking addition to the squad, after seeing a massive bulk of our fantastic squad of the previous season sold off by LFV that summer. I thought he'd be a "useful option", but I never expected he'd end up having the impact he has had at the club. I knew he had quality and experience, having seen him play for Valencia in previous seasons, but I don't think anyone expected he'd have scored 100 goals in less than 3 and a half seasons. Quite simply, he's been the best striker in the Liga since arriving in Portugal.

I think Rui Vitoria has somewhat of a conundrum to deal with now. On one hand, I don't think being a lone striker is Jonas' best position. He really thrives best playing behind and supporting a true CF (I.e Lima, Mitroglou). On the other hand, this 4-3-3 Vitoria has recently been employing seems like the way forward for the club this season. And with the form Jonas has shown this season, he simply can't be dropped. Certainly against Porto on Friday we must maintain the 4-3-3 with Jonas up front (and certainly with the ever impressive Krovinovic in CM), and also for most other tricky away fixtures for the remainder of the season. But for home matches against opposition we are expected to beat, I think we can revert back to the 4-4-2, with a CF (i definitely prefer Jimenez to Seferovic) partnering Jonas up front.

Jonas has undoubtedly been one of the best signings in the history of our club, and I would go as far as to say that he is arguably the best striker Benfica has had since the 60's. His detractors will argue that his performances against Porto,...

Jonas has undoubtedly been one of the best signings in the history of our club, and I would go as far as to say that he is arguably the best striker Benfica has had since the 60's. His detractors will argue that his performances against Porto, Sporting, and against top quality opposition in the Champions League has left a lot to be desired -- and there is some truth to this argument -- but no one can deny his natural talent, his football IQ, and his sheer dominance over the Primeira Liga.