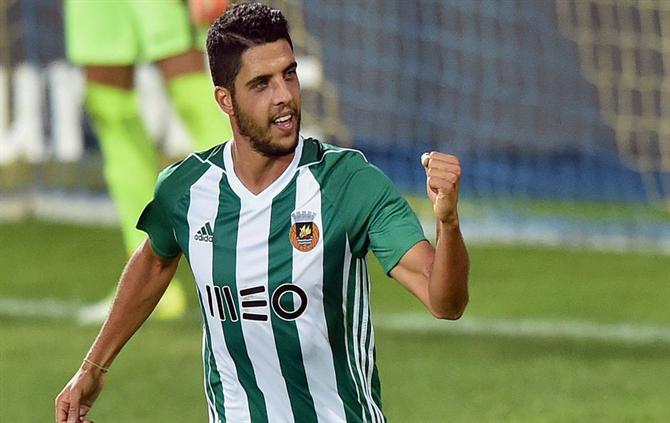 It was largely business as usual in Liga NOS in Week 14 as “The Big Three” all recorded pretty routine wins meaning it is as you were at the top of the table. Porto remain the leaders after thumping Vitoria Setubal 5-0, while Benfica and Sporting both recorded 3-1 victories against Estoril and Boavista respectively.

Some impressive individual performances featured in all three matches, however PortuGOAL’s Figure of the Week is Rio Ave’s João Novais, the super sub who climbed off the bench to score twice in his team’s comeback victory over Moreirense on Friday night.

Novais is arguably enjoying the finest form of his career at present, surely now cementing himself within Miguel Cardoso’s preferred XI. After signing from second tier Leixões in July 2015, Novais has largely been a squad player and for much of this season not much has changed, the 24-year-old midfielder finding himself on the periphery for much of 2017/18. But ever since he filled in for a then-ineligible Francisco Geraldes against Sporting at the end of October, he has become a fixture in the team with some impressive individual performances.

He followed that match, a narrow defeat to Jorge Jesus’ men, with a man of the match display in a 2-0 win over Estoril, scoring the first goal from long range before setting up the other. He also played a considerable part in the team’s next victory, when they eliminated Abel Ferreira’s excellent Braga side in the Taça de Portugal 4th round.

Ironically, Novais was surprisingly dropped to the bench for Friday’s encounter with Moreirense, the manager favouring the more defensive Brazilian Leandrinho to replace suspended skipper Tarantini, and accompany Geraldes and Pelé in the midfield trio. An uninspiring team performance saw Novais introduced as early as the 52nd minute, although Rio Ave would fall a goal behind three minutes later.

However, Novais’ introduction did ultimately prove the catalyst for the comeback, as he again showed his penchant for strikes from outside the box, equalising with a nicely placed effort, albeit with the ball taking a considerable deflection.

Sensing a fragility in a struggling Moreirense side, Rio Ave quickly amped up the pressure on their opponents. Novais came close to adding an assist to his performance when he nearly found Hélder Guedes, before Geraldes missed a good opportunity to score in the 86th minute.

The Vila do Conde side didn’t have to wait much longer for a winning goal though. Rúben Ribeiro won a free-kick in a dangerous position, but still relatively distant from goal. Novais stepped up and bent in a beautifully flighted set piece that left the goalkeeper with no chance, a strike fully reflective of the confidence with which he has been playing with in recent matches.

As a result, Rio Ave remain in the hunt for a European place, as they battle with fellow hopefuls Vitoria Guimaraes and Marítimo, both of whom also picked up maximum points this weekend. Cardoso already had a good squad at his disposal but the emergence of Novais in such good form gives him plenty more selection headaches in the months ahead. While many of Liga NOS’ bigger names have grabbed plenty of headlines, it shouldn’t be ignored that Novais is certainly one of the most improved players in the division in the past two months.