FC Porto and Sporting go into Christmas top of the tree 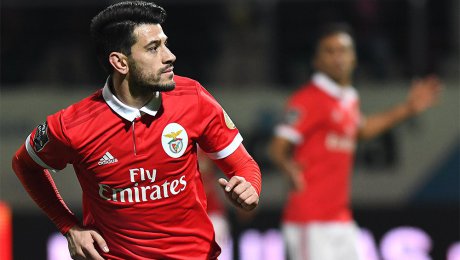 Matchday 15 had plenty of clubs and fans alike wishing for a merry and tranquil Christmas, as the Primeira Liga headed into its final week of the calendar year.

For Jorge Jesus, the wishlist was long, yet refreshingly clear - "three or four new players" to help fuel Sporting through the busy months of January and February, as they thickened the pressure on FC Porto in the league with a 2-0 win at home to Portimonense.

A mere win, for the time being at least, was all cross-city rivals Benfica required in their bid to steady their rocky campaign, duly achieved in emphatic fashion with a 5-1 demolition-job over Tondela at the Estádio João Cardoso.

Porto, not to be left behind in a strong first lap of the season, would also get the job done efficiently versus Marítimo by claiming a 3-1 victory in front of their home crowd, enabling the Dragons to end the year as the official leader of the Liga NOS table. Follow the weekend's action here, brought to you, as always, by PortuGOAL.

Welcoming Portimonense to the Estádio José Alvalade, just one more win would see Sporting accumulate the highest number of points (39) after the 15-game-mark this century - a feat not achieved by the Lisbon outfit since 1990.

The Lions would require just eight minutes to begin working towards that end, as Daniel Podence timed his disguised pass to Bruno Fernandes to perfection and the goal-hungry midfielder finished the move off neatly turning the ball past visiting goalkeeper Ricardo.

Shoya Nakajima came close to pulling a goal back for the visitors with a chip wide of Rui Patrício's front-post in the 33th minute, with Portimonense enduring a near-miss of their own on the brink of half-time when Podence played Bas Dost through and the Dutchman's left-footed strike necessitated an excellent Lucas' clearance off the line.

Vítor Oliveira's side saw their fortunes worsen in the 54th minute when Emmanuel Hackman's stamp on Marcos Acuña was picked up by the referee and rewarded with a second yellow card and subsequent red, as Sporting began to spread their total dominance over proceedings.

Five minutes later, Dost would be placing the game beyond much doubt with a side-footer in off the inside of the post, as Gelson Martins' low cross and Bruno Fernandes' deft touch set the target man up to double the Green and Whites' lead.

There could've been more joy for the home fans from Gelson's exploits on the right flank, with the winger's cross in the 72nd minute skipping by numerous bodies with the goal left begging and the game closing at 2-0.

Following the elimination from the Taça de Portugal midweek at the hands of Rio Ave, success in the league has become a must with each passing day for Benfica, hoping for an adequate response away to Tondela.

Pizzi made sure the wait for a goal was a short one, as he looked to reunite himself with the form that has made him a fan favourite over the years when sliding a shot under Claudio Ramos in the 17th minute, courtesy of André Almeida's deep cross.

Eduardo Salvio doubled Benfica's lead in the 26th minute, nodding Alejandro Grimaldo's cross back across Tondela's goal from 12 yards and into the far corner.

A third followed later with Salvio in the thick of things again, as the Argentine scooped a pass over to Pizzi prior to the midfielder catching the volley with his laces and powering the Eagles to a three-goal-advantage at the interval.

On the hour-mark, a guided finish by Jonas from a studied set-piece amplified Benfica's lead to 4-0 before Tyler Boyd's consolation goal at the other end in the 75th minute.

The Lisbon outfit's reply would come in the form of another Jonas goal in the 77th minute, engineered by Pizzi's low pass across the box that set the Brazilian to finish from close range and take Benfica's tally to five goals.

Fifth-placed Marítimo have overcome many an expectation after last summer's exodus, with a scalp over the highly-favoured and thus far undefeated FC Porto being the next shock to be eyed up.

Being a scenario the Dragons simply couldn't afford to endure, Diego Reyes' headed goal from Alex Telles' corner in the 18th minute offered the hosts a handy bit of reassurance, with Sérgio Conceição's men already dictating much of the traffic prior to the opening goal.

That was until Fábio Pacheco appeared to throw a spanner in the works in the 26th minute, as his deflected shot inside the box found its way past José Sá and leveled the score at 1-1.

The yellow-carded João Gamboa then invited all kinds of pressure onto his Marítimo side when leaving his foot hanging for a tackle and catching Héctor Herrera late, subsequently reducing the islanders to 10 men in the 39th minute.

Porto took little more than five minutes to make their numerical advantage count, as Yacine Brahimi stepped inwards before setting Moussa Marega through on goal and assisting the Malian for a rising shot into the back of net on the brink of half-time.

In the 78th minute, the same Brahimi-Marega combination served to unlock the Marítimo backline once more, with Marega battling for his space inside the box and nabbing the final goal in a 3-1 win.

OPolvo
This comment was minimized by the moderator on the site

Fc Porto has the best team this year. Benfica are not looking good at all and really need to make some signings this transfer window if they want to save their season at all. Sporting are good but also missing a lot of opportunities.

That was a much-improved performance from Benfica. They played with far more intensity both with and without the ball -- a far cry from the disjointed, almost disinterested performance we saw last week at home to Estoril. Some of the quick,...

That was a much-improved performance from Benfica. They played with far more intensity both with and without the ball -- a far cry from the disjointed, almost disinterested performance we saw last week at home to Estoril. Some of the quick, one-touch combination play down the left wing in particular was extremely encouraging. Krovinovic did cough the ball up in the build up to Tondela's only goal, but no one can deny the impact he has had to our attack. We look a far more fluid side with Krovinovic on the pitch. I also can't forget to praise Salvio. He has really been upping his game in recent weeks.

If we can bring in a couple of signings (preferably a CB and an attack-minded RB) and avoid any long-term injuries to key players, we have a great shot at winning the Penta.