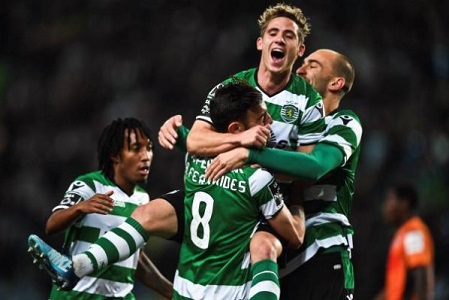 Week 15 in Liga NOS saw reasons to cheer for the underdogs as Estoril finally ended a poor run with a win over Aves and Moreirense upset Vitória Guimarães on Monday. Elsewhere the top 4 remains unchanged as Porto, Benfica, Braga and Sporting all racked up fairly routine wins.

The latter’s victory was an entertaining encounter at the Estádio José Alvalade, the home side running out 2-0 winners in no small part due to a sparkling performance from Daniel Podence, PortuGOAL’s Figure of the Week.

Sporting’s diminutive forward Podence showed what he was capable of on Sunday night, terrorising the Portimonense backline, who were unable to cope with his exuberant movement and dynamism in the final third. He stands at only 5ft 4ins but therein lies his USP in Jorge Jesus’ side. His “opposites attract” relationship with 6ft 5ins striker Bas Dost gives the Lions real variety in attack and it can make for the stuff of nightmares for the opposition.

Podence is also effective from wide areas but the manager sees him more suited centrally, and Sunday’s encounter showed why.

The match started very openly and Podence almost gave Sporting the lead after just two minutes, latching onto Bruno Fernandes’ long pass and showing outstanding agility to get the ball under control, before he was ultimately denied by Portimonense goalkeeper Ricardo Ferreira.

But when Fernandes and Podence reversed roles seven minutes later Sporting were in front. Podence with a delightful through ball to find Fernandes’ perfectly timed run from deep, the latter then calmly stroking the ball into the corner.

Portimonense were reduced to 10 men early in the second half and this gave Podence even more space. A second goal put the match to bed in the 60th minute, Bas Dost with a precise strike in off the post.

Podence’s role in the move was subtle but effective. An initial dummy from him saw the ball finding Dost, who was in more space, and his subsequent run into the box drew defenders towards him. This again allowed the Dutchman more room, and when the ball was played in he slotted home unopposed.

Podence should have ended the game with more assists, but Dost and Gelson Martins both squandered presentable openings he had created.

Sporting have a pretty clear “best XI” barring one selection headache for Jesus: whether to start Podence or Rodrigo Battaglia. The combative Battaglia can be deployed when the team needs to be a little more compact, and provide a higher level of defensive cover alongside William Carvalho. But the alternative option of Podence brings an extra level of flair for when they face more stubborn opposition. The pair have rotated in the starting lineup for the last 6 matches now, of which they won 5 (losing the other to Barcelona).

After a very successful loan spell with Moreirense last season, Podence is maturing into an excellent option for Sporting. He has an ideal coach in Jorge Jesus to help him develop the tactical side of his game and while he is yet to represent the senior side at international level, it’s not out of the question that the 22-year-old could be in Fernando Santos’ thinking as the 2018 World Cup nears if he can maintain this level of form.

Related: FC Porto and Sporting go into Christmas top of the tree

Would love to see Daniel Podence get a shot for the senior side; always been a big admirer of his. He's another one of those "X-factor" type of players that brings something different to anyone else available. Just off the top of my head, my list...

Would love to see Daniel Podence get a shot for the senior side; always been a big admirer of his. He's another one of those "X-factor" type of players that brings something different to anyone else available. Just off the top of my head, my list of "X-Men" includes: Cristiano Ronaldo (one of the best ever), Andre Silva (how long have we waited for a decent striker?), Ricardo Quaresma (the master of the cross), Gonçalo Guedes (versatility, vision, and scary pace), Bernardo Silva (how long have we been waiting for someone capable of creating on a consistent basis?), Edgar Ie (versatile central defender who's quick and very comfortable with the ball at his feet), Bruno Fernandes (creative midfielder who can score from LONG range), William Carvalho (our defensive midfield metronome who never appears rattled), and now, Daniel Podence (the busy bee who works his tail off and rushes his opponents all game long). There are other talented, important players to the team of course *cough Pepe and Rui Patricio cough*, but I could see like for like replacements come in for them sooner or later. The rest? Not so sure. I'd love to be wrong though.

You mentioned the dynamics of having Bas Dost (the bigger-bodied consistent goal-scorer) up top with Podence making defenders extremely uncomfortable... I think a similar affect could be seen pairing him with Ronaldo. For all the chemistry that Andre Silva and Ronaldo have had, Podence does offer something much different in that position - he'll do all the dirty work that you don't want Ronaldo doing. And, I could be alone in thinking this, but, it seems to me that whenever I watch Podence, his intensity rubs off on his teammates. This is another reason why I think there's an "X-factor" to him. He could be our World Cup version of Euros Renato Sanches.

If, for nothing else, here's hoping Fernando Santos gives him a call up for the forthcoming March friendlies to test him out as an alternative to Andre up front. I think it'd be great to see what he offers, and, I think he'd make the most of his opportunity.