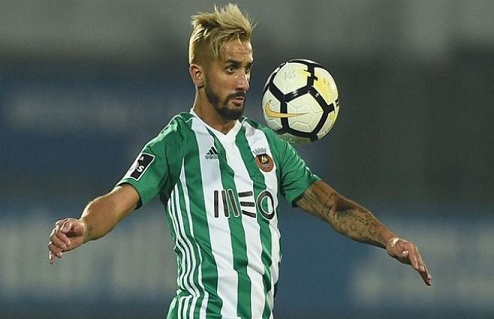 2018 has opened with a feast of football for Liga NOS fans with games coming thick and fast in January. Week 16 was thrilling one, full of goals, red cards and controversy as Porto extended their lead at the top after Sporting and Benfica shared the points in the Lisbon derby.

But PortuGOAL’s Figure of the Week comes from outside “The Big 3”, although perhaps not for much longer. Rio Ave’s Rúben Ribeiro is reportedly close to joining Sporting in this transfer window and he was at his electric best in his current side’s 4-2 win over Paços de Ferreira.

Ribeiro has shown glimpses of his talent in Portugal for a number of years now for the likes of Paços, Gil Vicente and Boavista, but it is at Rio Ave that his consistency and contribution has gone up another level. Like many of his team-mates he has been revitalised under the tutelage of manager Miguel Cardoso, hired last summer, as the club now sit in 5th place in Liga NOS.

Wednesday night’s win over Paços displayed everything that is good about Ribeiro: superb close control, excellent dribbling and also the capacity to do damage from central areas as well as when stationed on the left wing, where he has started mostly this campaign. It was cutting in from the left that almost brought himself and Rio Ave the opening goal as early as the 4th minute, ultimately being denied by Paços goalkeeper Rafael Defendi.

In the 31st minute another opportunity came his way but he just fired wide when slightly off balance, having been played through by Francisco Geraldes, another excellent performer on the night.

The 63rd minute however encapsulated why Jorge Jesus is so keen to bring him to Lisbon, and supposedly beat Porto to his signature. A stunning, almost Messi-like run into the box drew another fine save from Defendi and denied Ribeiro what would have been one of the goals of the season so far.

In the end Ribeiro managed to get himself the goal that his performance deserved, killing off Paços’ spirited fightback with a simple finish in stoppage time.

On many occasions over the past couple of seasons Ribeiro and showcased his obvious ability but he often lacked a consistent end product, something that has altered this season considerably. Time isn’t hugely on his side at the age of 30 but he is now set to get the big move that his performances in 2017 have deserved.

It goes without saying that he would face extremely stiff competition for a place in the team at Sporting, up against the likes of Marcos Acuña and possibly Daniel Podence in terms of his own best position. But with Jorge Jesus’ men still fighting for trophies on four fronts there should be more than a few opportunities to prove his worth if he does indeed sign with the Lions.

Not only would the Lisbon club be acquiring a player with different characteristics to the aforementioned Acuña, but one that on his day is capable of causing nightmares for some of the best defences in the country.