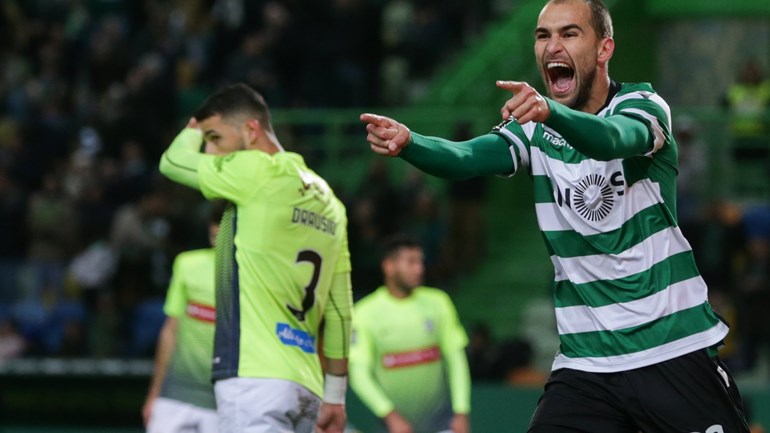 The midway point of the season often opens up the opportunity for reflection, albeit with little time to do so, with the top six all engaging in breathless action again this weekend following the intense Derby-led set of fixtures in midweek.

Benfica were the first of the Big Three to take to the field, travelling north to face lowly-placed Moreirense and skipping by with a comfortable 2-0 win. Sporting reciprocated the Eagles' energy to put plenty more past Marítimo in a 5-0 win back in the capital, leaving both Lisbon rivals hoping for a slip-up from league leaders FC Porto.

The Dragons found a way to repel the bad vibes at half time, storming back from a goal down to see off Vitória de Guimarães with a 4-2 victory. Here's PortuGOAL's round-up of the big results up and down the country.

They may have only conjured up a point last Wednesday, but there can be few doubts that Benfica were the side feeling more encouraged after their 1-1 draw with local rivals Sporting, as they sought to tame their new-found hunger with a win against Moreirense.

In trying to do so, Rui Vitória's side looked towards 19-goal Jonas to inspire creativity in attack, with the Brazilian rising to the occasion when looping a ball over to Pizzi at the back-post and assisting the Portuguese mainstay for the game's first goal in the 23rd minute.

Benfica edged themselves closer to a second through Franco Cervi, arriving fractions late for André Almeida's cross in the first half, with the danger posed by Moreirense via Arsénio's close-range header, well saved by Varela, in the second period demonstrating just how important the game's next goal would be.

Fortunately for the Eagles, Jonas was on hand to pluck the killer goal in the 74th minute, benefiting from João Carvalho's defensive work in the final third before leaving André Micael for dead inside the box and finishing coolly.

With the score concluded at 2-0, Benfica's win kept the Red & Whites in close proximity with the league leaders, also keeping the three-point gap to 4th-placed Braga.

For Sporting, aside from winning, the task will have been to re-inspire much of the crowd that had to endure a nervy 90 minutes away to Benfica, as a depleted, yet overachieving Marítimo squad came to town.

The Green and Whites could rely on the traditional Gelson Martins-Bas Dost double-act to lead the way, with the former setting up the free-scoring Dutchman to tap home a cross from close range in the 21st minute.

Daniel Ramos' structured defence remained locked until half-time, but they succumbed to Sporting's increased pressure five minutes into the second period, with Bryan Ruiz picking out a near-post finish for his first league goal of the season.

The Lions' dominance resumed to hand Dost his second of the day, doing just enough in the 74th minute to steer Bruno Fernandes' cutback over the line. Wolfsburg's ex-striker looked far more convincing for his hat-trick, coming just four minutes later, as he pounced on the rebound from Fernandes' shot to make it 4-0 with his head.

The final honours fell to Marcos Acuña, smashing his shot inside the box deep into Charles' net in the 91st minute and securing a 5-0 victory for Sporting at home, as the attentions turned to what Porto could do at the Estádio do Dragão.

With victory escaping Vitória's grasp for almost a month now, Sérgio Conceição sensed blood against his old club, unleashing the sparsely-used Óliver Torres in the light of Héctor Herrera's suspension.

But despite the focus on Porto's fierce attack, it was the highly-coveted Raphinha who'd crack the code first for the visitors, as the Brazilian lurked at the back-post to volley past José Sá in the 21st minute.

The Dragons won't have been pleased to find out there was an inkling of offside to Guimarães' opener, but that only served to motivate their side further in the second-half, as Vincent Aboubakar's first-time volley in the 57th minute commenced the fight-back.

Yacine Brahimi had the home crowd celebrating a second goal in the 63rd minute, slaloming his way into the box before poking a chipped effort into the far corner in style.

The third member of Porto's attacking trident, Moussa Marega, also got in on the act with a glancing header against his former club in the 78th minute, with the merciless Malian snapping at the chance to make it 4-1 moments later from Ricardo Pereira's low cross.

On-loan Sporting man Heldon completed the 4-2 score-line with a neat solo effort late on, as the league leaders maintained the picture at the top of the table.

Is there a better passer of the ball or more skilful player than Brahimi in the liga?
Felipe was missed at the back.
2 weak goals conceded. You can see Reyes telling Ricardo to get the man behind him but no and there’s a free goal.
Now that...

Is there a better passer of the ball or more skilful player than Brahimi in the liga?
Felipe was missed at the back.
2 weak goals conceded. You can see Reyes telling Ricardo to get the man behind him but no and there’s a free goal.
Now that Coutinho has gone Liverpool don’t look quite as a scary and Chelsea can keep their hands off Telles!
PORTO!