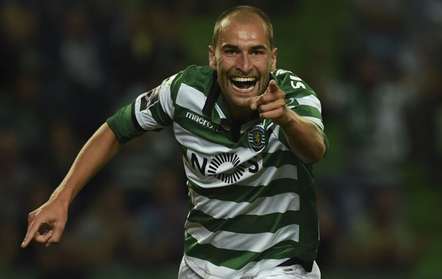 We’ve officially reached the halfway point in Liga NOS this season and “The Big 3” are battling out a tense title race with only one defeat thus far between the trio.

This has largely been in part down to each of Benfica, Porto and Sporting boasting serious firepower up front, with Brazilian Jonas leading the way with 20 league goals.

Porto’s Vincent Aboubakar and Moussa Marega are both tied in 3rd place with 14 apiece but Sporting’s deadly Dutchman Bas Dost is now ahead of the pair in 2nd place with 16 after a hat-trick against Marítimo on Sunday. He is PortuGOAL’s Figure of the Week.

What a fine signing Bas Dost has proven to be for Jorge Jesus’ side. The former Heerenveen and Wolfsburg forward was brought in to replace a Leicester City-bound Islam Slimani in August 2016 and has promptly racked up 56 goals from 69 games in all competitions since. His transfer fee of a reported €11.85m consequently appears daylight robbery.

His performance in the demolition of Marítimo on Sunday was an accurate microcosm of his time at Sporting thus far: often somewhat on the periphery of play but ultimately his numbers do not lie. His economical efficiency was confirmed with reports stating he had as few as 14 touches throughout the entire game, with only 4 efforts on goal, but he still ended up with what is his 6th treble for the club.

His first goal of the night was brutally simple, the Dutchman drifting into space to meet Gelson’s cross into the box for a simple finish past Charles.

Dost’s movement, along with his improved hold-up play, has been a big feature for Sporting this season and he nearly added a second goal in the 36th minute, peeling away from his marker to find space again in the middle, only unable to connect properly with Ristovski’s pass (an offside flag was later raised anyway).

His second goal did arrive in the 74th minute however, once again given the simplest of tasks in front of goal, this time set up by the outstanding Bruno Fernandes.

Four minutes later his hat-trick was complete with his best finish of the lot. Bruno Fernandes was heavily involved again, driving a powerful shot at Charles, who was only able to parry into Dost’s path. Still there was plenty of work to be done, and the 28-year-old showed excellent reactions and ability to guide his header into the net.

What is notable about the goal is Dost’s superb movement throughout, constantly staying on his toes as he anticipates how the sequence will play out. Marítimo defender Diney is flat-footed by comparison, unable to track his more mobile opponent.

An unqualified success in Portugal, like many of his talented team-mates all that really remains to be accomplished in Lisbon is adding trophies to his CV. Sporting are still fighting for trophies on four fronts, as are Porto, and with a proven and reliable goalscorer in Dost the Lions have every chance of winning their first silverware since 2015.