Pepa making his mark at Tondela 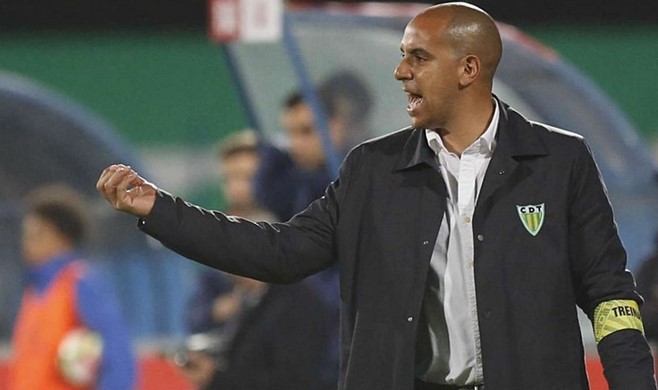 We are now past the halfway point in Liga NOS 2017/18 and the league table has a relatively familiar feel to it with “The Big 3” as dominant as ever.

One of the biggest surprises however, sees Tondela currently sitting very comfortably in 10th place, when a third consecutive relegation battle appeared more likely at the beginning of the season.

Their success this campaign, and indeed their miraculous survival in the 2016/17, can largely be credited to their manager Pepa. Read about PortuGOAL’s Figure of the Week.

Pedro Miguel Marques da Costa Filipe, better known as “Pepa”, took over at Tondela almost a year ago exactly, with the club struggling in the lower half of the table as has been their custom ever since their promotion to Liga NOS in 2015.

At the time, the only thing more improbable than their extraordinary escape from relegation in 2015/16, the first top flight season in their history, was to repeat the trick for a second year running. However, repeat it they did, a final day victory over Braga being the culmination of another stirring late season comeback to maintain their status among Portugal’s elite.

This season however has seen Pepa’s side move alongside more esteemed company into midtable security. While it has not all been plain sailing (winning only two matches between September and November), their more recent form has been superb: only one defeat in their last five matches (to champions Benfica), a run that includes three victories.

The latest of which was an ultimately comfortable 3-1 success at home to Feirense. As has been key to Pepa this season, his team selection closely resembled that he has used all year, an element of consistency that has been lacking in previous iterations of this team. He had to wait until the 2nd half to see his team break the deadlock: an excellent piece of skill and finishing from Brazilian winger Murilo, a player who has markedly improved under Pepa’s tutelage.

Murilo was very much on the fringes under Pepa’s predecessor Petit, but he has been Tondela’s best outfield player this season, as reflected by his status as the team’s top goalscorer with 7 league goals this term. Pedro Nuno doubled the lead shortly after, his deep free-kick bamboozling opposition goalkeeper Caio Secco.

Although João Silva pulled a goal back for Feirense, it was Murilo again who had the final say, wrapping up the points in stoppage time. He was given the easiest of tasks to roll the ball into an unguarded net after latching onto recent signing Sulley Muniru’s lofted through ball.

There were some question marks surrounding Pepa’s appointment to Tondela last January and perhaps fairly so. He did a good job previously with Feirense, setting them on their way towards promotion from the 2nd tier before being replaced in March 2016. He didn’t fare well in a short-lived spell with Moreirense in Liga NOS, leaving his post just 12 matches into his reign at the beginning of the 2016/17 campaign.

However, he is proving to be a real success with the plucky side from the inland central Viseu region Portugal. Pepa has managed to keep the core of the squad together as well making a couple of shrewd signings, notably re-acquiring Benfica’s Pedro Nuno on loan. Bringing in veteran Ricardo Costa has been vital on and off the pitch, while convincing Cláudio Ramos to extend his stay with the team was arguably one of the “signings” of the summer in the division.

It can’t really be overstated how much of an improvement the team have made compared to their previous top-flight seasons: in both 2015/16 and 2016/17 the team survived with 8 league wins apiece. By comparison, at the time of writing they already have 6 victories under their belt, so Auriverdes fans will be hoping for a considerably less dramatic role than they are used to in any last day theatrics come May.