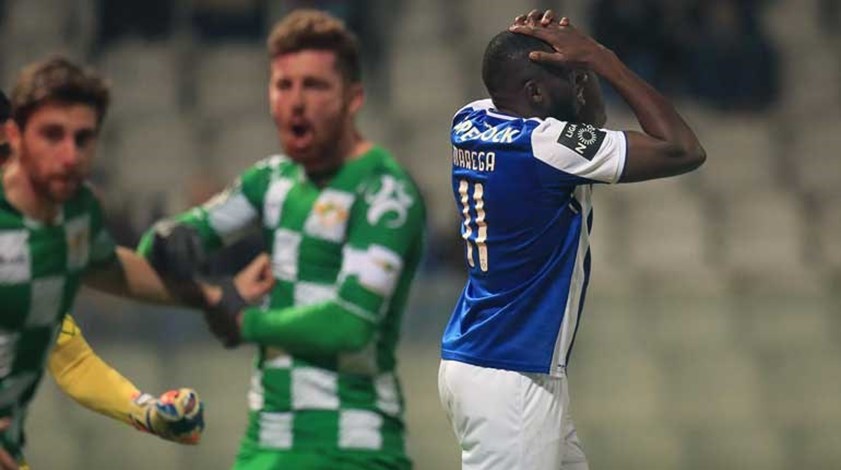 With the winter transfer window slamming shut across most of Europe, it was business as usual in Portugal with its latest midweek instalment of Primeira Liga fixtures.

Taking centre stage first on Monday night were Benfica, who required a late late Jonas equaliser to dig them out of an improbable defeat away to Belenenses, as the two Lisbon sides drew 1-1. The shared points were welcomed with open arms by FC Porto fans who flocked to Moreira de Cónegos, before they too had to settle for a solitary point, drawing 0-0 with Moreirense.

The surprise results opened the door at the top for Sporting to leapfrog their rivals, hosting Vitória de Guimarães and dealing them a late knockout blow through Jeremy Mathieu to win 1-0 at Alvalade. PortuGOAL brings you up to speed with the goings-on in the Primeira Liga title race.

As far as hunting grounds go, the Restelo has grown to become one of the mildest visits on Benfica's calendar, with Belenenses last inflicting defeat on the Eagles ten years ago, with the best the home team have managed being just two draws in between.

Nevertheless, the hosts' new boss, Silas, insisted there'd be no chance of his side simply playing for the draw as they looked to bring an end to their hoodoo.

With little action to speak of in the first period, it was Belenenses who totted up the attempts at goal going into half-time, while the Eagles looked to Eduardo Salvio either side of the interval to break the deadlock.

Benfica would be presented with a far better chance to go in front in the 70th minute, this one from the spot after Franco Cervi was swept off his feet inside the area, but the main-man Jonas failed to overcome the keeper from 12 yards, with the score still locked at 0-0.

That was until the debutant Nathan, on loan from Chelsea, put Belenenses ahead with four minutes to go, curling his shot low and out of Bruno Varela's reach.

There was still life in Benfica, however, with stoppage time overflowing the initial five minutes added on. The Lisbon giants placed their faith in Jonas for an 11th-hour free-kick, allowing the Brazilian to redeem himself by snatching a point with his unerring conversion.

Tuesday night saw the Dragons in action away to lowly-placed Moreirense, desperate for points, in Porto's first rare outing without the injured Danilo Pereira.

It was made clear quite quickly that it wasn't just Danilo's robustness that was being missed, as Felipe, Moussa Marega, Yacine Brahimi and new-boy Paulinho were all caught misfiring in a goalless 45 minutes.

Alex Telles pushed Porto a lot closer to the opening goal with a free-kick that caught Jhonatan scrambling in the 50th minute, with the ball smashing the crossbar and setting itself perfectly for Felipe to nod in on the rebound, but the defender was denied by Ruben Lima's last-ditch heroics.

As Tiquinho Soares added to the frustrations in front of goal with a series of misses, Moreirense were reduced to 10 men after Boubacar Fofana's second yellow in the 91st minute, as the visitors looked to ramp up the heat in injury time.

And it was so very nearly mission accomplished for Porto, as Abdul Majeed Waris, already deep into the final attack of the game, bundled in Ricardo Pereira's header but he had strayed into an offside position. The game ended 0-0, much to the dismay of Sergio Conceição

Rounding off the month with a fifth January signing - Lumor, from Portimonense - the Taça da Liga winners searched for a greater cause for celebration after their two title rivals had fallen to unexpected draws.

Vitória's aggressive pressing complicated matters, however, as they exposed Sporting's inability to construct with any real quality early on, leaving the two sides inseparable come half-time.

More problems surfaced for the hosts when their main goal-getter Bas Dost succumbed to injury as the second half restarted, leaving Seydou Doumbia and Fredy Montero little less that 45 minutes to form a match-winning partnership.

As Guimarães' intensity waned, chances started coming for Jesus' men, with the visiting goalkeeper Douglas present at the scene of both Doumbia's one-on-one miss and Bruno Cesar's back-post volley onto the frame of the goal.

The Brazilian goalkeeper starred once again in the 83rd minute, denying Marcos Acuña a Goal of the Season contender when tipping the Argentine's first-time volley over the bar.

Sporting had the ball in the back of the net less than a minute later, however, as Acuña picked out Mathieu from a cross, allowing the Frenchman to guide a volley out of the reach of Douglas and clinch a crucial 1-0 victory for his side.

The win sees the Lisbon outfit top the table by a point, although Porto still have the second 45 minutes of their clash against Estoril to complete.

Disappointing result for Porto. Now we’re in the second half of the season I fear teams have worked Porto out – press the midfield, deny space for Marega to run into and closely mark Aboubakar then they look a little out of ideas. The fact in the...

Disappointing result for Porto. Now we’re in the second half of the season I fear teams have worked Porto out – press the midfield, deny space for Marega to run into and closely mark Aboubakar then they look a little out of ideas. The fact in the first half of the season Sergio C. used Andre, Corona and Hernani as subs whereas now we rarely see them makes me think he’s unsure of this best options or he’s lost faith in some of the players, which, when comparing those performances to recent ones is a little odd. In previous games Porto scoring early has meant teams and space opening up to further exploit but this seems to has stopped recently as the goals have started to dry up for Marega/Aboubakar, which creates problems. This tactic is similar to the one Klopp uses at Liverpool so in the Champions League games scoring first will be crucial.

Rotating Herrera/Torres at the base of midfield was fine but Marcano’s distribution was missed and would have meant they could have played further forward. In the final third Moreirense just defended in numbers and Porto couldn’t break them down. Paulinho picked a few nice passes and the team needs more of these instead of option 1 being Telles/Marega/Ricardo crossing the ball. Of course they had the opportunities to score and didn’t take them but the more you create the more chance you’ll score. Great to see everyone celebrate when the goal went in but yes, it was offside.
Those 4-0 and 3-0 thrashings seem a long time ago now. Braga up next could be a problem.

I watched the first 30 minutes of the Belenenses game and they looked organised, pressing quickly and playing with intensity. The “smaller” clubs are stepping up v the big guns