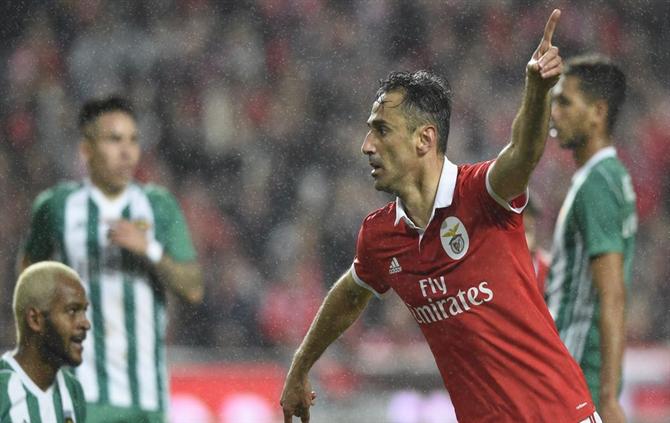 Following the twists and turns in this most fascinating of title races in the midweek round of games, what more surprises could the Primeira Liga throw up at the top of the table panorama?

Despite Rio Ave's best efforts, Benfica rose to their fans' demands by overcoming a one-goal half time deficit, as Jonas starred in a 5-1 victory. By the same token, in this weekend's main event, FC Porto battled to skip by Sporting de Braga with a 3-1 victory to reclaim top-spot, apparently on a temporary basis.

Whether the Dragons stayed at the summit hinged on Sporting's away trip to Estoril's Estádio António Coimbra da Mota, and it was there that Jorge Jesus' team succumbed to a shock 2-0 defeat - their first in domestic competitions this season - to slip down to third in the standings. PortuGOAL recaps the weekend's events.

In the wake of the draw against Belenenses on Monday night, over fifty thousand Benfica fans demanded a positive reaction at the Estádio da Luz to stay in the hunt for a fifth successive title.

The big start was reserved for Rio Ave, however, finding a way through the backline courtesy of Francisco Geraldes' charge and cross to Hélder Guedes, who nodded in the game's first goal after just nine minutes. João Novais sparked more danger for the hosts when striking the post from range in the 11th minute, with Benfica unable to truly bite back going into half-time.

The mood lightened three minutes after the restart as Jardel rose highest to equalise with his head from Alejandro Grimaldo's corner. Pizzi then completed the turnaround in the 62nd minute, reacting first to Jonas' cutback to trickle a finish past Cássio.

Set-pieces continued to be Rio Ave's undoing, as Jardel succeeded again in the air prior to Jonas intervening with a close-range finish past the goalkeeper, making it a remarkable ten successive games on the scoresheet in all competitions for the Brazilian.

Again from a corner, Ruben Dias was on hand to grab a fourth for his side in the 83rd minute, with the Eagles having time for one more strike just two minutes later, claimed by Raúl Jiménez, to conclude a 5-1 victory.

In the wake of Porto's draw to Moreirense in midweek, hosting 4th-placed Braga promised to be quite the test for the Dragons in need of all three points.

Finding his way into Sérgio Conceição's XI, his namesake Sérgio Oliveira cut the mustard with a guided header in the 13th minute to break the deadlock for the hosts.

Raul Silva patched the score back up for Braga on the half-hour mark, flicking a volley on from a corner to beat José Sá at his far post, but in good time Porto's aerial superiority would again rise to the top, as Diego Reyes nudged his team back in front in the 37th minute from an Alex Telles set-play.

The same culprit for assisting the first two goals was also central to number three for the Blue and Whites, with Vincent Aboubakar allowing Telles the honour of picking up a hat-trick of assists when nodding the left-back's pinpoint cross past Matheus in the 73rd minute.

With no way back in for Braga, Porto nailed down their path back to the top of the table with a 3-1 win.

Approximately 50% of Sporting's goals this season have derived from the contributions of Bas Dost and Gelson Martins, as noted by coach Jorge Jesus pre-match, making it difficult to downsize the anxiety in the air on a windy Lisbon evening.

Mix the Lions' littered health bill with first blood for the hosts and you had quite the storm, as Charalambos Kyriakou placed Estoril ahead from a corner in the 26th minute, despite Fabio Coentrão's best efforts on the line.

Matters worsened just three minutes later for the visitors when Ewandro, formerly of São Paulo, tapped home a second, with VAR validating the goal in spite of the initial offside call.

It was shaping up to be one of those nights for Sporting, as Sebastian Coates volleyed high and wide from a prime position before Bruno Cesar, against all odds, saw a cruel bobble rob him of the chance to pull a goal back in the 44th minute with the net at his mercy.

Devoid of any luck and showing little craft, Jesus' men witnessed the VAR chalk off Estoril's third in the second half, before the same thing happened with what would have been Fredy Montero's late consolation goal, as 'the Canaries' lifted themselves out of the drop zone with a hard-earned 2-0 victory.