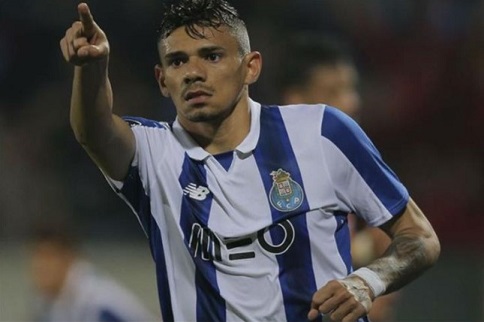 Week 22 of Liga NOS was business as usual for “The Big Three”, who all recorded wins to keep up their title challenges, while a resurgent Estoril secured their third straight victory away at Moreirense.

League leaders Porto have a busy week ahead of them with the resumption of the Champions League, and with it a mouth-watering first leg tie with Liverpool on Wednesday night.

They warmed up for the game with a 4-0 win over Chaves, in which the man of the match was Brazilian striker Tiquinho Soares, who is PortuGOAL’s Figure of the Week.

2017/18 hasn’t been an easy campaign for 27-year-old Francisco “Tiquinho” Soares, who was a Nuno Espírito Santo signing from Vitória Guimarães in January 2017. An early exit from his team’s opening match of this season against Estoril due to injury was followed by an absence that only ended in late November, a brief re-emergence into the team in September aside.

During his recovery, Moussa Marega usurped him and proved a revelation, making himself a hugely important part of Sérgio Conceição’s side. Soares had struggled for goals and confidence since his return, and clearly it got to him when he was substituted in their Taça da Liga semi-final defeat to Sporting in January, exchanging some unpleasantries with his manager, who is never one to shy away from confrontation.

The incident was dealt with swiftly. Conceição immediately dropped the striker from the squad and threw out what can be seen as something between a threat and a challenge during the January transfer window. “The door is half-open – it’s up to Tiquinho if he wants to come in or not,” said the Porto coach.

Judging by the player’s response, they proved the perfect motivational words as Soares has played a key role in his team’s two most recent victories. His superb headed goal was difference in the Taça de Portugal semi-final first leg last Wednesday, again versus Sporting, and his form continued into what was ultimately a comfortable victory at Chaves on Sunday.

Soares looked sharp throughout the early exchanges and he broke the deadlock in the 15th minute, calmly slotting the ball past Chaves goalkeeper António Filipe with his weaker left foot, after collecting a through pass from the excellent Sérgio Oliveira.

In the 28th minute it was 2-0, Soares doubling his own tally with a thumping volley from Maxi Pereira’s cross, leaving Filipe no chance.

Soares could have had his hat-trick just four minutes later, electing to find strike partner Marega instead of shooting, the Malian ending up being denied by a last ditch intervention from Nikola Maraš.

Soares again went close to a treble in the second half, when he was extremely unlucky to see his powerful shot from outside the box rebound off the post.

Overall though it was a timely reminder of Soares’ abilities, and the depth of options the manager has in attack, something that is particularly vital at the moment given that top scorer Vincent Aboubakar is struggling for fitness.

Soares’ Porto career began in explosive fashion around a year ago, a brace on his debut in a Clássico against Sporting was followed by a glut of goals until the end of the campaign. After losing that touch in the latter stages of 2017, he could just be hitting form at the right time as Porto chase the silverware that has eluded them since 2013.