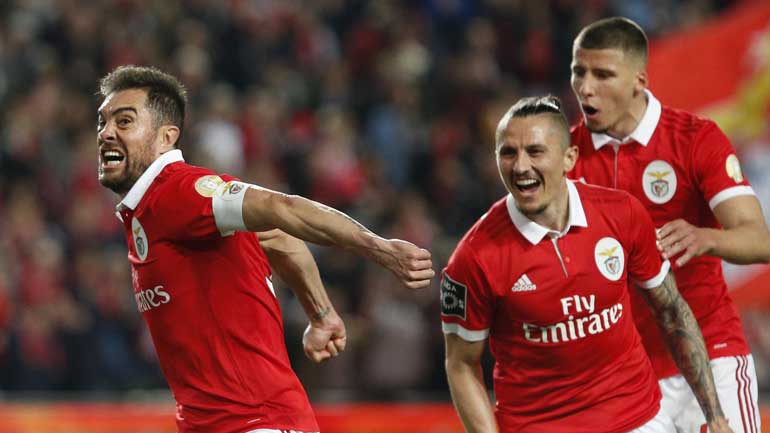 After a week of mixed emotions on the continental stage, the focus switched back to the title race and the potential hiccups, twists and turns that it could bring to the forefront.

It was mission accomplished at the Estádio da Luz, with Ruben Dias, Jardel and Jiménez all weighing in to defeat Boavista 4-0.

FC Porto responded in the perfect manner, not just to their rival's result, but also to the heavy 5-0 defeat inflicted by Liverpool last Wednesday, dealing Rio Ave a 5-0 thumping of their own at the Estádio do Dragão.

The final bit of action was reserved for Sporting, who would take things down to the wire, and some, before finding a winning goal deep into stoppage time, as they controversially claimed a 2-1 turnaround victory away from home. PortuGOAL takes you through the title race goings-on of the weekend.

The Eagles took to the stage with a surprise up their sleeve - the return of the injured Jonas - who could've left his mark on Boavista as early as the 15th minute prior Vagner's save from the penalty spot.

Ruben Dias would instead take on the role of goalscorer just three minutes after the penalty miss, nodding in from close range by latching on to a header across goal by his centre-back partner Jardel, giving Benfica the coveted lead.

Both centre-backs would find the net before half time, with corners again proving to be the hosts' favourite currency, as Jardel towered over the Boavista defence to grab the second goal shortly before the break.

A reaction in the second half saw the 'Black Panthers' threaten to conjure up a fight-back, but it was all shot down in the 76th minute as a desperate Nuno Henrique clearance returned back into orbit from his teammate's block before deflecting in off the defender's leg for an own goal.

Raúl Jiménez finished the job off for Benfica in the 91st minute, positioning himself well for André Almeida's cut-back and tapping in for 4-0, as Rui Vitória's men piled the pressure on Porto.

As two clear sensations of the 2017/18 season, both Porto and Rio Ave may have felt as though this was the best, yet worst time to face off, after the Dragons' heavy midweek defeat in the UEFA Champions League and the poor form strung together by the visitors in recent weeks.

From the second minute, the shinier side of the coin looked geared towards Porto, however, as Sérgio Oliveira stormed his side into a 1-0 lead with a well-placed low drive from outside of the box.

Tiquinho Soares made it two with a header off the underside of the bar in the 22nd minute before Moussa Marega, with the aid of Marcelo's intervention, left Rio Ave downbeat at the sight of a heavily-deflected goal past the half-hour mark.

Porto pressed for more in the second period and Marega made full use of the space afforded him to head in Alex Telles' free-kick at the near-post in the 72nd minute.

Soares then benefited from the use of the VAR late on to stab his brace into an empty net, as a 5-0 win fired Sergio Conceição's team back up the table ahead of their half-game in hand versus Estoril this Wednesday.

With a midweek journey to Astana - equivalent to going from Lisbon to Porto a staggering 23 times - the potential for burnout was there for Sporting, who fielded eight of the 11 used out in Kazakhstan.

An early goal for Tondela's Miguel Cardoso, beating Rui Patricio at his near-post, complicated matters but the Lions fought back level as early as the 26th minute, as Bas Dost returned to action with a trademark headed goal.

A couple of efforts from Bruno Fernandes and Jeremy Mathieu edged Sporting closer to a second, but 1-1 was how it remained going into the break.

The second-half started slowly for both outfits, but Mathieu's second yellow card in the 58th minute added spice to the encounter, the Frenchman paying the price after getting embroiled in a dispute with Pedro Nuno before being given his marching orders.

With the Green and Whites limited in numbers and Tondela looking more than happy to settle for a draw going into stoppage time, Jorge Jesus' men gave it one final push, in spite of the game seemingly exceeding the allotted stoppage time.

Sebastian Coates would use those spare seconds to thrash in Sporting's winner from close range in the 98th minute, keeping his side glued to the Primeira Liga front-runners, as Tondela, among others, fumed over their defeat.

Zues
This comment was minimized by the moderator on the site

Stopped watching the game at exactly 3 min and 40 secs thinking it was all over when one of the Tondela players went down... thinking Porto has to lose for Sporting to at least have a chance... went to bed annoyed... definitely wasn't expecting...

Stopped watching the game at exactly 3 min and 40 secs thinking it was all over when one of the Tondela players went down... thinking Porto has to lose for Sporting to at least have a chance... went to bed annoyed... definitely wasn't expecting 99 min win for Sporting... finally Sporting wins the way Porto & Benfica have done so... maybe Sporting have a chance this year

Sporting played better with 10 ten against Tondela... not sure why Tondela didn't go all out and attack