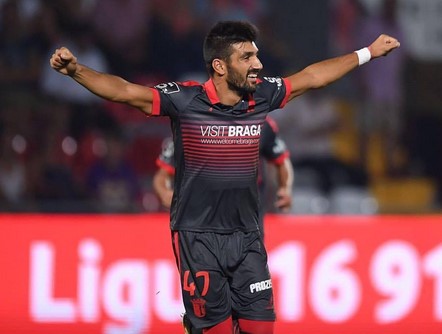 Emphatic wins for Benfica and Porto headlined Week 23 of Liga NOS, while Sporting also won by the skin of their teeth in controversial fashion away at Tondela.

However, perhaps the most surprising and impressive result of the weekend saw Abel Ferreira’s Braga romp to a 5-0 victory in the Minho derby against Vitória Guimarães, who promptly sacked manager Pedro Martins after the match.

One of the standout performers in the game was the versatile Ricardo Esgaio, one of their most consistent players this season and also PortuGOAL’s Figure of the Week.

Esgaio had shown flashes of his ability at his former club Sporting but it is only since his move to Braga last summer that he has begun to truly realise his potential. Esgaio traded green and white for red, along with Brazilian left-back Jefferson (on loan), in the deal that brought Argentine midfielder Rodrigo Battaglia down south to Lisbon. While Battaglia has done a fine job for the Lions, Braga have certainly benefited from the deal considerably.

Esgaio added a goal and also claimed two assists to his already impressive statistics in a dominant display which secured the bragging rights (no pun intended!) in northern Portugal. Braga were already two goals to the good, and also a man up after Wakaso’s red card, when Esgaio’s header fell to Vukčević, who in turn saw a shot from distance deflect in for a 3-0 lead at half-time.

Esgaio turned provider again not long into the second half, laying the ball off for Wilson Eduardo to curl in a stunning effort.

Braga continued to press with their numerical advantage, and Esgaio was able to get forward with even more regularity, not needing to cover defensively as much with the three points safe. He rounded off the scoring in the 61st minute, collecting Hassan’s cross to tap into an empty net.

The victory saw Braga strengthen their grasp on 4th spot, now leading Rio Ave by 13 points. Perhaps more importantly for them, the lead over their bitter rivals Vitória, who beat Braga to 4th place in 2016/17, has been extended to a hefty 20 points.

Esgaio has been no small part on the vast improvement of the side in the current campaign, and he now has 4 goals and 11 assists in all competitions, a very healthy return for a player often played at right-back as well as further forward. It’s been an excellent decision from Braga coach Ferreira to push Esgaio into a right-wing position as it was clear at Sporting previously that perhaps defensive duties were not the strongest element of the 24-year-old’s game.

The manager’s rotation policy, of which most players have fallen victim to, has been a key factor in the Arsenalistas success, but Esgaio stands alone as the outfield player with the most appearances (36) in 2017/18. Overall a fine week in a fine season for arguably one of the most consistent players in the division outside Os Três Grandes.