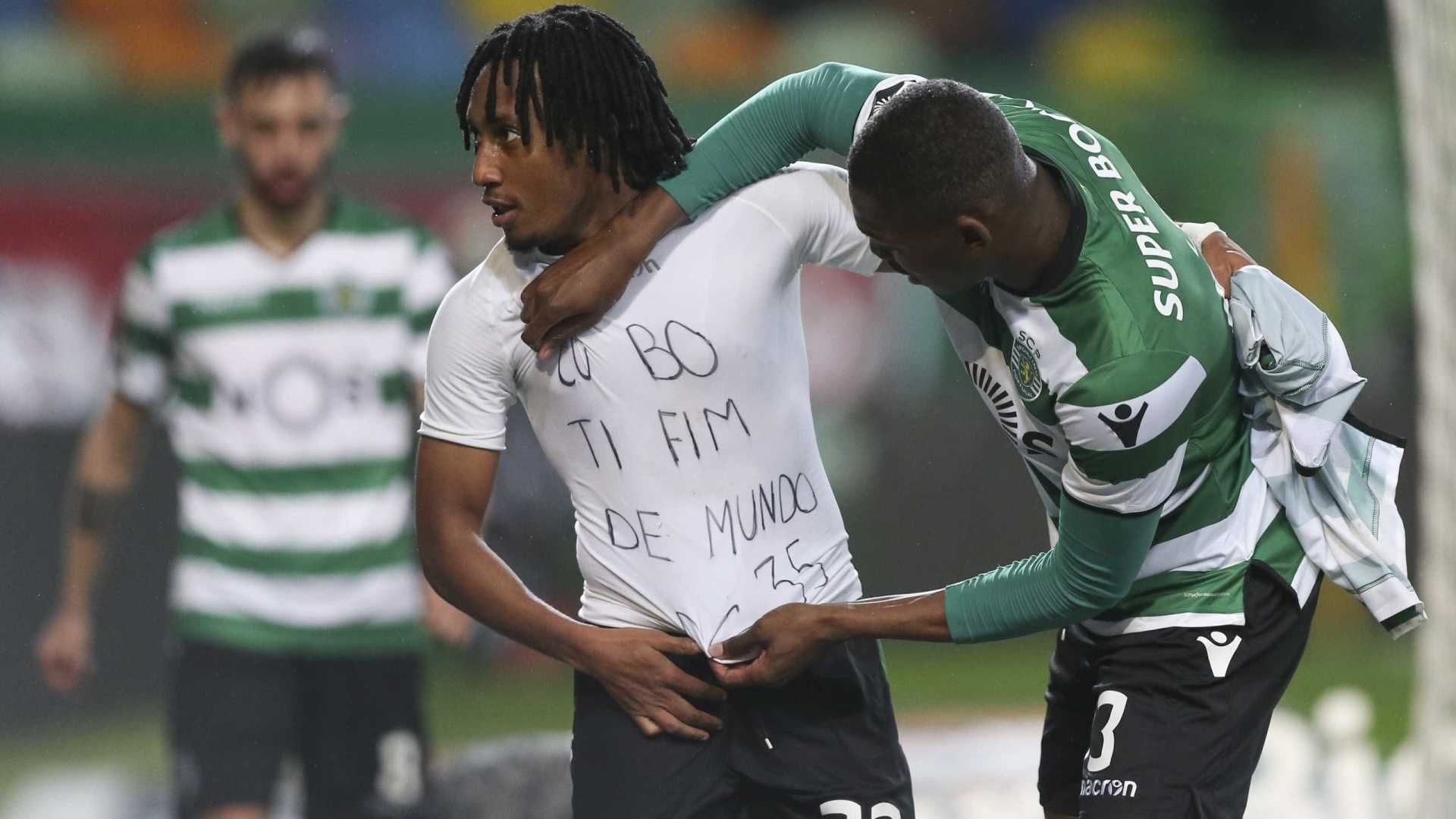 The Primeira Liga entered its final ten-game countdown to the sound of FC Porto beginning to pull away from its rivals at the top of the table, having defeated Estoril 3-1 in midweek.

All is far from set, however, and Benfica were keen to ensure that with a 3-1 turnaround win away to Paços de Ferreira on Saturday night. Porto replied by restoring their five-point advantage over the Eagles, as a Moussa Marega-inspired performance powered the Dragons to a 5-1 victory against their hosts, Portimonense.

Sporting's turn saw the Lisbon outfit leave it late for a second game running, with red cards again on show in a 1-0 victory versus Moreirense. Here's the best of the weekend's action.

We begin at the Estádio da Mata Real, widely recognised in recent Primeira Liga history for its big-team scalps and the home of Paços de Ferreira's clash with title-chasing Benfica.

The difficulty of the task at hand for the Eagles dawned promptly, as Xavier's dash down the right culminated in an accurate cut-back for Luiz Phellype, who put the hosts in front inside the first ten minutes. Short for inspiration, Benfica took until the 41st minute before producing genuine danger, with the hosts requiring a Miguel Vieira goal-line clearance to deny Jonas and keep his side ahead by half-time.

The Brazilian goal scorer wasn't to be denied, albeit further down the line in the 72nd minute of a must-win game, as he met Raúl Jiménez's shot half-way to finish the chance off himself, leveling the score in the process.

Jonas came up with the answers again in the 88th minute, finishing inside the box from Haris Seferovisc's pass to hand Benfica the lead prior to Paços going a man down late on.

Rafa then killed off what had threatened to be a frustrating game for Rui Vitória's men with a third in the 95th minute, striking across goal with success to conclude a 3-1 victory.

With Porto racking up eight goals in their last 135 minutes of football and Portimonense, the hosts for the day, also leading the charts outside of the top four, odds were that we would get to see more than a few goals fly in on Sunday night.

The first of which rippled the net after just ten minutes, as Otávio played in Tiquinho Soares clear on the left, the striker's pass into Marega's path requiring just one sure touch to be steered in for the opener. Marega would play the same card six minutes later, with Otávio popping up as the spare man to slam home a second, despite goalkeeper Ricardo Ferreira's best efforts.

There was still time for goal number three just before the interval, conjured up by Maxi Pereira's driven cross to assist Marega for the first-time finish, as Porto cruised in Portimão.

Diogo Dalot varied the Dragons' crossing game in the second half, cutting in and going high with his delivery for Tiquinho Soares to get in on the act and make it 4-0 on the hour-mark. Porto's young make-shift left-back starred once more in the 66th minute, this time aiming low on his weaker foot to set up Yacine Brahimi's first goal since the beginning of January, as the Algerian clipped a volley into the far post.

Portimonense grabbed their consolation goal in stoppage time through Lucas Possignolo, completing a 5-1 score-line that saw Sérgio Conceição's side restore their five-point-advantage at the top.

As if the pressures of winning was not high enough going into this fixture, Sporting were also challenged by an outbreak of flu in the camp, taking the likes of William Carvalho, Stefan Ristovski and Fábio Coentrão out of the question, along with other notable absences such as the injured Bas Dost and Cristiano Piccini and the suspended Jeremy Mathieu.

Bryan Ruiz was presented with the chance to ease a few of those worries in the 30th minute, as the ball fell for the Costa Rican in front of goal before a tame effort into the goalkeeper's grasp left the masses disappointed. The ex-Fulham man went on to orchestrate the Lions' best opportunities before the break, firstly isolating Bruno Fernandes one-on-one prior to a dead-eye cross into André Pinto's heading range, but both could go no closer than narrowly missing the target.

Inducing flashbacks of last weekend's game against Tondela, Sporting were then tasked with finding all three points in the presence of another red card, as Radosav Petrovic paid the price for a poor refereeing decision past the hour-mark.

The Alvalade outfit stuck to the script and found the winner in 93rd minute through Gelson Martins, but it was the winger's innocence in celebrating with his shirt off that eclipsed the 1-0 win at full-time, leaving the referee no choice but to show him a second yellow for the goal dedicated to his former team-mate, Ruben Semedo, currently residing in a Spanish jail.

Suspension for Gelson means he'll miss the highly-anticipated derby versus Porto this Friday, with five points separating the two sides going into the game at the Estádio do Dragão.

Brandon
This comment was minimized by the moderator on the site

I feel for Gelson, and wanting to support his former team-mate, but that was a foolish decision that will cripple his team for the FCP game. I can't wait to see the game next week! should be a cracker!

Random thoughts about the weekends games. (not facts, just what I noticed)


Benfica
Jonas is on another level from everyone else on Benfica. Pacos defended for their lives and fouled heavily (and ugly as the one on Jonas late in the game). Rafa...

Random thoughts about the weekends games. (not facts, just what I noticed)


Benfica
Jonas is on another level from everyone else on Benfica. Pacos defended for their lives and fouled heavily (and ugly as the one on Jonas late in the game). Rafa Silva played a fantastic game and its good to see him finally (hopefully) regaining his Braga form once again. Would love to see him challenge for a Selecao spot. Rueben Dias caught ball watching on the 1st goal.

Benfiquistas, help me out. Why on earth is Pizzi taking dead balls? He is flat out awful at it and I haven’t seen one success yet. With all the talent they have (Jonas) someone needs to take that duty away from Pizzi.

Also, Jonas plays much better and has way more room with Jimenez plays.


Sporting
No Bad Dost and no Gelson going into Porto is going to be a nightmare for Sporting. Along with Bruno Fernandes they seem to be the only options that can actually create anything out there. Fredy Montero and Bryan Ruiz miss way too often for my liking. All Acuna does is foul and he won’t last the game vs Porto is my prediction. If I was Porto I would attack down his side all game.

Sporting have a very good core (Dost, Fernandes, Coentrao, Gelson) they need to dump the dead weight, they are carrying a lot of it.

Win or lose, Sporting is the most fun to watch. I feel for Sportingistas. It cant be easy cheering for them every week. They cause way too much stress. ?


Porto
Nothing much to say. They keep chugging along, hammering Liga Nos teams (not so much Liverpool).

Its tough to get an accurate read on their squad as they are stacked up front (Marega, Aboubakar, Tiquinho, Hernani, Pacienca, Brahimi). I think perhaps the forwards mask a lot of issues and there isn’t a squad in Portugal able to exploit them this season.


Best Teams to watch in Liga Nos not in the top 3 (so far)
Braga, Tondela, Portimonense, Chaves, Rio Ave, Boavista


How the hell are these clubs not dead last?
Maritimo and Guimaraes. Very sad to see how far these two solid clubs have fallen. Thier game this weekend was terrible.


That is all. lol

Zeus
This comment was minimized by the moderator on the site

Sporting playing crap and still managing two victories with a man less each time... definitely a league winning attribute there... but against Porto is another story they are seriously good from and Sporting aren't... I don't hold much hope for...

Sporting playing crap and still managing two victories with a man less each time... definitely a league winning attribute there... but against Porto is another story they are seriously good from and Sporting aren't... I don't hold much hope for them to win at Porto maybe they steal a 1-0 but I can't see Sporting winning Porto by more than two goals and that is a big if they win... massive let down by Gelson he will be missed, I guess Sporting will flood the midfield and only play one attacker up front