Yusupha making his mark at Boavista 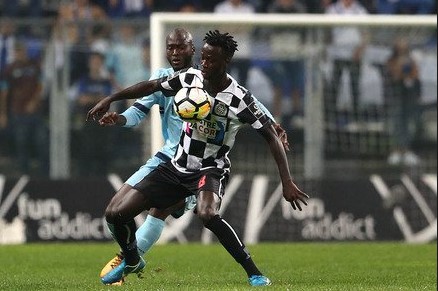 There are now just 10 matches of Liga NOS 2017/18 left, with both the title race and the relegation battle shaping up to be very tense affairs that look set to go down to the wire.

One side who does not feature in either of those however is Boavista, who have enjoyed an excellent 18 months or so as a club, vastly improving their domestic performances since their reinstatement to Portugal’s top division in 2014.

They emphatically swept aside Vitória Setúbal at the weekend, and the star of the show was Gambian forward Yusupha Njie, PortuGOAL’s Figure of the Week.

The son of the former Sevilla cult hero Biri Biri, the greatest Gambian footballer of all time, very little else was known of Yusupha when he arrived at Boavista in June 2017, signed on loan from Moroccan side FUS Rabat by then-manager Miguel Leal.

With just one international cap to his name, and his only previous club being Real de Banjul in his native country, his lack of pedigree meant that the signing seemed to represent something of a pressure-free gamble for the side, and indeed the 24-year-old spent much of the first few months of the season on the periphery of the first-team.

Leal was dismissed from his post in September, which led to the hiring of Jorge Simão, who has since turned around the fortunes of both player and club.

Yusupha was selected for his first league start of the season at the end of October in a 3-0 defeat to Porto, and gave their Brazilian defender Felipe his fair share of problems on the night. He was just beginning to pick up a head of steam before he ruptured his posterior cruciate ligament, an injury that threatened to curtail his whole campaign. Thankfully he made a far quicker recovery than expected and has since has become a key part of Simão’s side.

Yusupha’s importance is largely down to his ability to operate anywhere across the front three, a versatility that Simão has employed to good effect. His pace is a real asset, particularly when deployed as a lone striker as he was in Sunday’s convincing win.

Ably supported by wingers Mateus and Renato Santos, and central attacking midfielder Fábio Espinho, Yusupha gave Vitória nightmares throughout the match. After defender Nuno Henrique had given Boavista an early lead, Yusupha doubled the team’s advantage just before half time with a nicely-placed shot from outside the area.

A lovely dummy from Espinho saw the ball fall to the Gambian and he confidently dispatched the chance. He doubled his own tally in the 71st minute to put the game beyond Vitória. With his confidence high he was never likely to miss, beating the offside trap to latch onto David Simão’s through ball and then power his shot past Cristiano.

Boavista’s win keeps them right in the hunt for fifth place, four points behind Rio Ave as they compete with them, Marítimo and Chaves for a spot behind the preordained top four.

Yusupha’s form is keeping talented loanees Rui Pedro and Leonardo Ruíz out of the attacking options, and despite his apparent disadvantage in terms of pedigree over the pair (the two promising strikers are on loan from Porto and Sporting respectively), he has more than merited his place in Simão’s XI.

It is comparatively early days, but this largely unknown quantity might just catch the eye of some bigger fish in Portugal in the coming months.