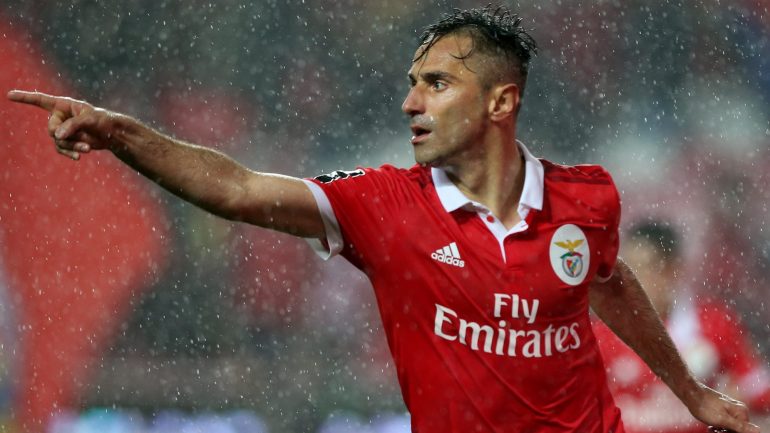 With this week's main event in the Primeira Liga pinning title hopefuls FC Porto and Sporting up against each other, the chance fell Benfica's way to take advantage of at least one of their rivals dropping points at the Estádio do Dragão.

The 2-1 win for Porto saw the Dragons solidify their hold on top spot as the Lions all but fell out of the race for domestic glory, especially after the Eagles' 5-0 win at home to Marítimo.

The unstoppable Jonas was again the main man for Benfica, hitting a hat-trick in a victory that leaves Rui Vitória's men three points ahead of their Lisbon rivals, with Sporting de Braga now mounting a final bid to snatch third place after demolishing Estoril 6-0 away from home.

Despite undoubtedly hoping for an opening at the very top, Sporting's defeat did at least give Benfica the chance to isolate themselves in the chase for first place, with only Marítimo standing in their way.

A bright start for the Madeirenses was cut short by Jonas' opener in the 16th minute, who picked out the near-post from range to leave Charles scratching his head between the sticks. The Brazilian's first strike paved way for more joy in front of goal, as Alejandro Grimaldo took full advantage of Andrija Zivkovic's intricate pass inside the box to double Benfica's lead six minutes later.

The Brazilian's sharp eye for goal continued throughout the first half, with Jonas making it 3-0 when directing André Almeida's cross in via the underside of the crossbar. Benfica's chief goal-getter then put himself in line for even more plaudits, sealing his hat-trick from the penalty spot in the 42nd minute, as Vitória's men enjoyed the comfort of a 4-0 advantage going into the break.

Marítimo sunk deeper in the second period, with the VAR stepping in to confirm Gamboa's raking foot down Zivkovic's leg merited the midfielder a red card in the 56th minute.

Benfica clocked out with a wonder-strike from Zivkovic in the 81st minute, finding the top corner with a right-footed curler from range, as a 5-0 win maintained the five-point distance between them and league leaders Porto.

In the thick of a frenetic relegation battle, the need for points is huge down by the Portuguese Riviera, as Estoril welcomed a quietly sound Braga side to the Estádio António Coimbra da Mota.

There was an early suggestion, however, that it would be a complex night for Ivo Vieira's team, as an unmarked Wilson Eduardo put Braga in front with his head in the 7th minute.

Lucas Evangelista nearly equalised in the 33rd minute with a guided effort wide, but less than 10 minutes later the visitors dealt Estoril a cruel double-blow as Paulinho made it 2-0 on the brink of half time, with VAR confirming the goal. Ricardo Horta followed up with the third in stoppage time, as the ex-Malaga man picked his spot coolly from inside the box.

Braga's Paulinho reciprocated Horta's composure in the 67th minute, cutting inside on his left before finding his side a fourth goal to celebrate.

With Fábio Martins claiming a fifth in the 77th minute, Horta doubled up on his earlier strike by the 93rd minute to the sound of a 6-0 away win, as Braga cut the gap between them and third-placed Sporting to just four points.