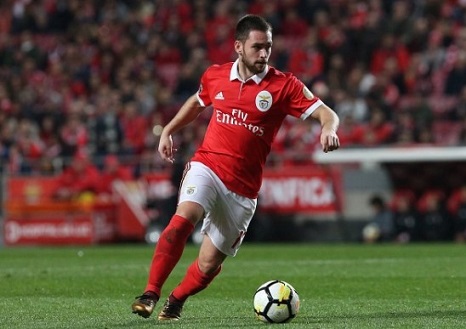 Liga NOS leaders Porto were the big winners of Week 25, beating rivals Sporting to create an 8-point gap between the pair and possibly eliminate the Lisbon side from this season’s title race.

Their overall lead however remains at five points though, as defending champions Benfica refuse to throw in the towel, registering their 5th straight league victory with a 5-0 hammering of Marítimo.

Their recent resurgence of form has largely been down to star striker Jonas banging in goals for fun as is his custom, but another key factor has been the reintroduction to the side of Serbian winger Andrija Živković, who was in brilliant form again at the weekend. He is PortuGOAL’s Figure of the Week.

I’ve referred to Živković as a winger there but what has been notable about his and Rui Vitória’s team’s turnaround in fortunes in recent weeks has been the tactical decision to employ the 21-year-old in a more central attacking midfield role.

Credit must go to Vitória for the switch, needing a solution when in-form Croatian Filip Krovinović was ruled out for the season in the latter stages of the team’s 3-0 win over Chaves in late January. Benfica stumbled in their next match, snatching a point by the skin of their teeth with a stoppage time equaliser against Belenenses. Promising youngster João Carvalho was given the nod in attacking midfield that night and it appeared that perhaps being thrust into the first-team limelight had come a little too soon for him.

With every single point precious in this race for the title Vitória decided to act quickly and look elsewhere, choosing Živković for their next game, an ultimately comfortable 5-1 win over Rio Ave.

Živković’s skill set and features do lend themselves to thriving in a central role, boasting outstanding close control and a brilliant weight of pass. It’s no coincidence that since he has been played in this role from early February that Benfica have won all 5 of their matches, scoring a remarkable 20 goals in the process. In Saturday’s emphatic win at Estádio da Luz, Živković added a goal and an assist to his season tally in a dazzling display.

With Benfica already 1-0 up through Jonas, Živković’s aforementioned skill for finely judged passing was on display in the 22nd minute, a lovely threaded through ball finding Spanish left back Álex Grimaldo, who calmly finished past Marítimo goalkeeper Charles.

Six minutes later Živković should have had his second assist of the game, another brilliant pass this time finding Franco Cervi but the Argentine’s indecisiveness got the better of him, eventually choosing to pass to an offside Pizzi rather take on the shot himself.

The build-up though showed exactly how Živković can thrive in these central areas, some great link-up play and movement alongside Pizzi, who is another player that has struggled for top form for much of the campaign but looks revitalised in recent weeks.

In the 81st minute Marítimo’s misery was complete, Živković rubbing salt in the wounds with the goal his performance deserved. The opponents weary and down to 10 men at this point, the Serbian cut inside onto his weaker right and curled a superb finish into the top corner.

On this evidence it is no surprise that Živković is in high demand. Manchester United, Monaco and Arsenal were reportedly among those present to observe the match, the latter of which supposedly there solely for the Serbian.

Some remarkable talents have crafted their trade at Estádio da Luz on their way to bigger and better things, Angel Di Maria, Nemanja Matić and Ederson to name but a few. Expect Živković to join that list in the not too distant future.