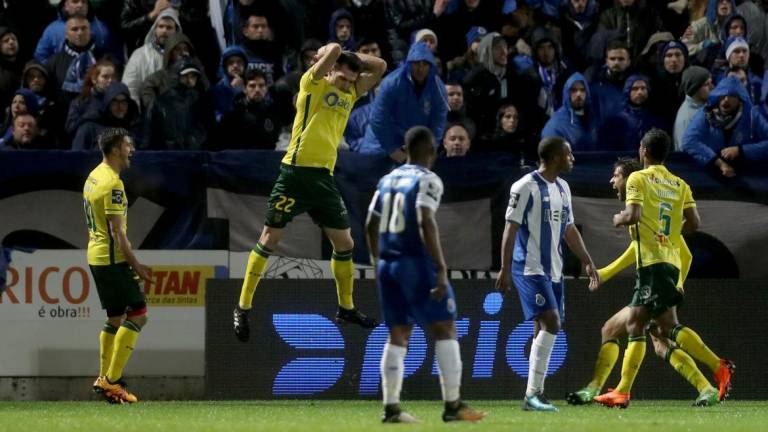 Having done their bit in beating Desportivo das Aves 2-0 at home on Saturday night, the Eagles watched on as a Miguel Vieira opener and Mário Felgueiras’ penalty heroics combined to hand Porto a 1-0 loss on Sunday, with the advantage at the top now trimmed to two points.

The Dragons’ slip-up also offered a glimmer of hope to Sporting, who cut the gap from third place back down to five points, thanks to Bas Dost’s double in a 2-1 win away to Chaves.

Nine games, nine finals - that was the mantra buzzing around the Estádio da Luz when welcoming Aves to the red half of Lisbon, as Benfica resumed their pursuit of Porto at the top in their quest for a fifth straight championship triumph.

With much of the danger passing through Rafa Silva and Jonas, the Eagles were, nevertheless, unable to break the visitors’ down in the first half, as the two sides roamed into the break with a goalless draw.

That all changed in the second period, with Benfica beginning to pepper Aves’ goal with greater frequency, enabling Jonas to break the deadlock in the 71st minute from Franco Cervi’s cut-back.

Ruben Dias then secured all-three points just five minutes later, as he reacted first to Raúl Jiménez’s strike to slam home into a semi-open net with his left foot.

Despite sitting 17th in the league table, the Mata Real has never the type of ground to ease up on, given its notable list of scalps over the years.

In difficult weather conditions, Paços began to lay the foundations for another one of those special night in the 34th minute, as a tense Filipe Ferreira cross invited Miguel Vieira to slide in at the near-post and open the scoring.

Porto aimed to bite back immediately, with Felguerias well-positioned to prevent Vincent Aboubakar’s out-stretched attempt at goal from causing damage, as the hosts held onto their lead through to the interval.

The Dragons’ avenue to goal was later offered in the form of a penalty, as Felipe was nudged over in the 66th minute, but Felgueiras stood strong once more to deny Yacine Brahimi from the spot.

‘Os Castores’ held on for the win - only their second of 2018 - with the race for the title now wide open.

In the knowledge that a win versus Chaves could offer Sporting a way back into the title tussle, Jorge Jesus was once again forced to attack that challenge with a string of notable absences.

With the Lions requiring an alert Rui Patrício to keep Chaves out in the first half, Sporting’s manager wasted little time in introducing Bas Dost into the game in the second half, and to no surprise it was the Dutchman who provided the solutions around the hour-mark.

Courtesy of some good work from the left by Ruben Ribeiro, the ex-Rio Ave playmaker was able to set up Dost for an easy nod in at the back-post, as the Green and Whites took a 1-0 lead.

Rodrigo Battaglia then protected Sporting’s advantage with a first-time clearance off the line before making an immediate impact at the other end.

From the right-back position, the ex-Chaves man battled for possession deep in the final third before squaring a pass across goal to Dost, with the latter tapping in his brace in the 86th minute.

Chaves replied to claw one back from the penalty spot, converted by Platiny in the 91st minute, but it wouldn’t be enough to deny Sporting of all three points.

Thanatos
This comment was minimized by the moderator on the site

Porto losing reminds me when Sporting lost to Union Madeira and went on to win every game expect for Benfica... If Benfica win all their games along with Porto assuming Porto lose to Benfica, Porto will look back to this day in this match as the...

Porto losing reminds me when Sporting lost to Union Madeira and went on to win every game expect for Benfica... If Benfica win all their games along with Porto assuming Porto lose to Benfica, Porto will look back to this day in this match as the reason they lost the league.

Also glad to have Bas back for Sporting, they really need him for the later stages in Europe (no disrespect to Montero & Doumbia) but he really provides more than goals, the game changed entirely when he came on... its obvious that Jesus built this team for him.

Even with Benfica doing all they can, I still back Porto to win the league

Porto's defeat to Pacos Ferreira certainly makes things a whole lot more interesting. I knew Porto were going to drop points with their injury-plagued squad, so it was up to us to get the job done in our games. Defeating Feirense away is never...

Porto's defeat to Pacos Ferreira certainly makes things a whole lot more interesting. I knew Porto were going to drop points with their injury-plagued squad, so it was up to us to get the job done in our games. Defeating Feirense away is never easy, and our subsequent matches against Vitoria Guimaraes and Setubal could also prove quite difficult if we do not approach each game with the correct mindset. That being said, if we go into the Porto match on the back of three more wins (and especially if Porto drop points against Boavista, Belenenses, or Aves), I'd really like our chances. In short, winning out the rest of our games will be far from easy, but when you take into account the way Benfica has been playing, it's certainly possible.

Vasco
This comment was minimized by the moderator on the site

This is just one of the reason why people switch off from football. To win the league just get a "referee" to do the job for you

I agree with you Vasco, the time wasting is a plague in every league but everyone does it and there seems no talk nor any motivation to stamp it out. Cherry picking this instance isn’t fair. Every owner and manager complains when it happens to...

I agree with you Vasco, the time wasting is a plague in every league but everyone does it and there seems no talk nor any motivation to stamp it out. Cherry picking this instance isn’t fair. Every owner and manager complains when it happens to them and then defend it when they do it. Nothing will change with this attitude.

The truth of what happened with Porto is a lot harsher than simply a goalie who did nothing all game and then wasted a minute. Porto had 90 minutes to pound the last place club in Liga Nos into gravel and they didn’t. Not that Pacos played exceptionally well and the goalie stole the show either. He did nothing but save a terrible child like penalty from Brahimi. Porto were bad on this day, no other way around it and Pacos capitalized.

They should have watched Pacos vs Benfica two weeks prior as Pacos had Benfica as well. It took Jonas magic in the 70th minute to tie the game then Benfica opened up the flood gates after Rui V threw on every striker he had. Pacos signaled they weren’t going to get relegated without a fight. Porto did not heed the warning, played a very stale game and they paid the price.

I know this sucks for Portistas but for the neutrals this sets up a HUGE game on April 15th in Lisbon. Will we have another Kelvin magical moment or will Benfica win steal the title? Cant wait!


Read More
There are no comments posted here yet