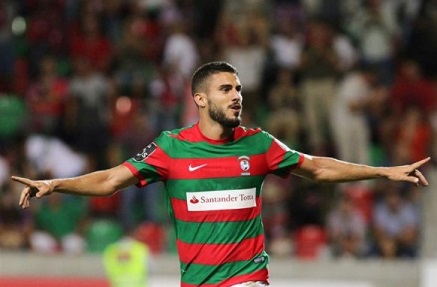 Another dramatic week in Liga NOS saw the title race take another intriguing twist with league leaders Porto losing their unbeaten status with a surprise loss to Paços de Ferreira, meaning Lisbon rivals Benfica and Sporting were able to close the gap at the top.

One of the more action-packed games of the weekend though saw an often goal-shy Marítimo overcome Vitória Setúbal in a six-goal thriller at Estádio dos Barreiros.

Portuguese attacker Ricardo Valente was the star man with two goals and an assist, and he is PortuGOAL’s Figure of the Week.

Valente signed for Madeira-based side Marítimo last summer for an undisclosed fee, and he has been a consistent part of a side that began the campaign strongly before falling away somewhat in recent weeks. He struggled to make a significant impact in a loan spell with Paços de Ferreira in 2016/17, whom he had joined from Vitória Guimarães, another team where he had shown flashes of his potential without reaching the heights he is capable of.

Most comfortable operating from the left wing, cutting inside onto his stronger right foot, Valente has proved a good deal of versatility over the last few years in also starting from the right-hand side, as well as more centrally as a lead or support striker. On Sunday he linked to often devastating effect with Rodrigo Pinho and recent arrival Joel as Vitória were overpowered.

After Joel had given Marítimo an early lead, Valente got himself on the scoresheet to double Daniel Ramos’ side’s lead, a neat cushioned volley from close range after a brilliant set-piece delivery from Rúben Ferreira.

An impressive finish on his weaker foot for his 6th Liga NOS goal of the season. His 7th arrived just before half-time, a goal that showcased his aforementioned ability to move centrally from wide left areas. Again Rúben Ferreira was the supplier, but really this was all about Valente, holding off a couple of admittedly weak Vitória challenges to find the corner via a deflection.

Vitória threatened a comeback when former Marítimo full-back Patrick Vieira curled in a superb strike for the away side but in the 70th minute the game was put to bed as Valente turned provider. His flick on found Rodrigo Pinho, who made no mistake from close range, the goal eventually given after consultation with VAR.

It was a really important win for Marítimo in what has been a disappointing 2018 for them thus far, just their second league victory of the calendar year.

The 26-year-old Valente is becoming increasingly integral to the team, particularly as the likes of Edgar Costa and Gevorg Ghazaryan struggle for fitness. He now has over a quarter of the team’s league goals in 2017/18, so the manager and fans will be looking to him to lead the challenge to finish in 5th place, a battle that is shaping up very nicely against Rio Ave, Chaves and Boavista, with only 4 points separating the four sides with 8 games left to play.