Benfica go top as Porto and Sporting crash to defeat 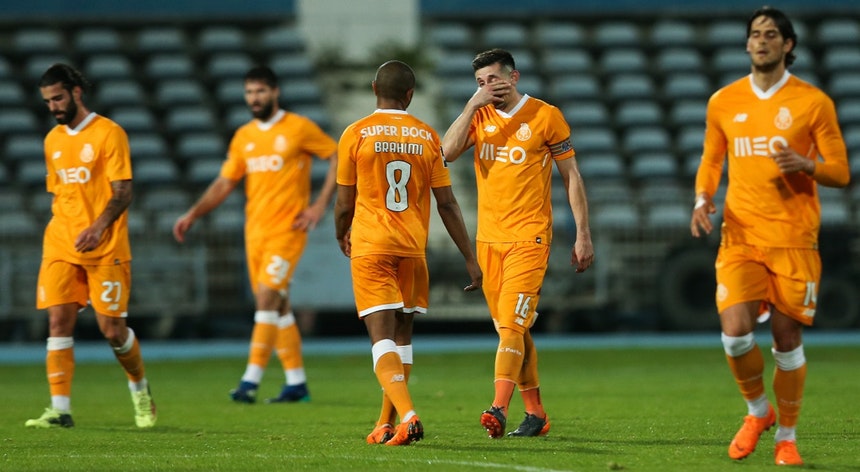 With the last international break now behind us, it was time for a Primeira Liga outfits up and down Portugal to rev their engines ahead of the final seven-game dash towards the end of the season, with many tales still to be revealed along the way.

The first of which came at the Estádio da Luz, where a Jonas brace positioned Benfica to reclaim top-spot in a 2-0 victory over Vitória de Guimarães, last Saturday. Later in the night, Sporting’s view of the title was eclipsed by their new tussle for third place, as Raul Silva’s late goal moved Braga to within a point of the Lions, while also all but ending the Lisbon club’s hopes of winning the Liga NOS.

On Monday night FC Porto would succumb to an even bigger shock away to Belenenses, as a 2-0 loss - only their second league defeat of the season - allowed the four-time champions Benfica to rise to the summit of the league table with a one-point advantage over the Dragons with six matches left to play.

Against a Vitória side yet to taste victory away from home in 2018, Benfica looked poised to ramp up pressure at the top of the table, in the comforting environs of their own Estádio da Luz stadium.

With both sides trying their luck from crossing positions throughout a lively first half, the game’s first goal came only on the brink of half-time, as Jonas added to his towering goal-count from the spot, following João Aurélio's handball.

The search was on for a second goal after the break, with Alejandro Grimaldo shining in many of Benfica’s moves, but the majority of the plaudits were later reserved for Raúl Jiménez, who assisted Jonas with all the flair in the world to set the Eagles onto a 2-0 win in the 78th minute.

Haris Seferovic came close to adding to the scoreline late on, but a Jonas double proved to be more than enough to position Benfica at the top, albeit most thought only momentarily.

Following a week of heated exchanges between the two Sportings, the mood was set for a cracker Estádio Municipal de Braga, as the hosts aimed to officially revive their hopes for a third place finish come the end of the current campaign.

Sporting began on top and could even have picked up an early penalty by the 13th minute, following a late challenge from Matheus on Bas Dost inside the box, while the likes of Wilson Eduardo and Ricardo Horta threatened for Abel’s side at the other end.

Tensions grew inside the stadium after Jeremy Mathieu’s own goal, giving Braga the lead on the brink of half-time, was disallowed by the VAR for a previous foul on Gelson Martins, with the sides heading into the break locked at 0-0.

Braga’s confidence continued to grow throughout the encounter, with an 83rd minute red card for Cristiano Piccini offering the hosts the chance to get on top of proceedings.

The winning goal soon followed as Raul Silva emerged in front of Rui Patricio from a set-piece to head past the Portugal number one in the 87th minute. Offering no response, the result sees third-placed Sporting slip into a battle to finish within the top three, with just one point now separating the two sides.

In must-win territory, the Dragons took to the Restelo in search of the ideal reply to Benfica’s victory over Guimarães on Saturday, as Belenenses eyed the continuation of a steady route to safety under Silas as manager.

Having last found the back of the net in a draw against Benfica, on-loan Chelsea attacker Nathan was at it again for the Belém outfit, racing clear of the away defenders and placing Porto a goal down inside the first ten minutes with a delightful chip over Casillas.

Yacine Brahimi and Tiquinho Soares tried their luck for the visitors, with no-one in Porto’s orange able to find the apt response before the half-time whistle.

André Moreira starred between the sticks in the second period to keep Sérgio Conceição’s team at bay, with the script lending itself to Maurides, the brother of Porto’s former captain Maicon, to finish the title hopefuls off with a second goal as he powered a header past Iker Casillas in the 70th minute.

Defeat sees Porto drop down to second place for the first time this year, trailing Benfica by a point in the Primeira Liga standings.

Thanatos
This comment was minimized by the moderator on the site

I'm putting a £100 for Braga to win the Title... I won't be surprised if Braga still manage 2nd place... they are on form and as a Sporting fan I have to admit they were robbed of a goal... Gelson is not a diver I don't think he dived but the...

I'm putting a £100 for Braga to win the Title... I won't be surprised if Braga still manage 2nd place... they are on form and as a Sporting fan I have to admit they were robbed of a goal... Gelson is not a diver I don't think he dived but the replays don't show that he was kicked in the knee clearly... so how the referee gave that was really bad and if it was reverse I would be pissed, Sporting didn't play well after the 30mins not that Braga played much better but overall seeing as they were robbed it was a just result

Benfica have only been playing for the league title and it shows. Porto well losing 6 points this late on against teams not Sporting, Braga or Benfica must be real annoying.

Read More
Thanatos
There are no comments posted here yet