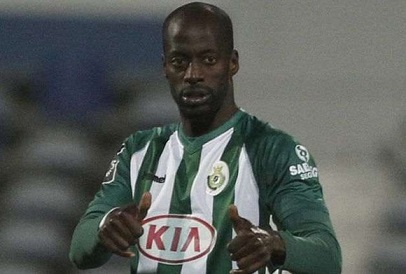 A dramatic weekend in the Liga NOS saw the title race cracked open with a change in leadership for the first time this season, Porto surrendering their lead to defending champions Benfica after a surprise loss away to Belenenses. Braga also breathed new life into their hopes of finishing 3rd with a tense victory over Sporting.

However, the standout performance, and PortuGOAL’s Figure of the Week, was an easy one to identify, Vitória Setúbal striker Edinho becoming the first player to score 4 goals in a single match this season in their 4-1 triumph at Aves.

Now 35, Arnaldo Edi Lopes da Silva, better known as ‘Edinho’, has had a long and varied career that has included 6 international caps for Portugal, as well as stints playing in Spain, Turkey and Greece.

He spent six months with Vitória Setúbal early in his career and he has now come full circle, re-signing for the club in August 2016. While his playing time as a starter has decreased with age, he has still proved a useful tool for Vitória, contributing 19 goals in 64 games since rejoining, as well as helping the side on their way to this season’s Taça da Liga final.

Vitória are enduring a tricky 2017/18 in Portugal overall but Thursday’s victory over Aves was a timely boost as they battle to avoid the drop, moving five points clear of the bottom two with six matches remaining. They didn’t have it all their own way in very damp conditions, finding themselves 1-0 down after a sluggish 45 minutes.

The response in the second period was emphatic, however, as Edinho showcased his poaching skills to turn the game in their favour. He was in the right place to tap in the equaliser in the 58th minute after Costinha’s shot had been tipped onto the post by Adriano Facchini.

In the 70th minute it was 2-1 Vitória, Edinho proving deadly from close range again as his far post header beat Adriano for a second time.

Seven minutes later the 35-year-old had his hat-trick with the pick of the bunch, picking up Costinha’s superb through ball to absolutely thrash a shot into the net, knocking himself over with the ferocity imparted on the effort.

Edinho really rubbed salt into Aves’ wounds with his fourth goal with five minutes of the match remaining, coolly converting a penalty won by Costinha.

Edinho’s notable feat did not go unnoticed, with none other than Portugal captain Cristiano Ronaldo sending a message of congratulations through his great friend and current Vitória Setúbal player José Semedo. "He called me an old banger, said well done and that he'd scored four goals in a match too but never in such a short space of time," Edinho explained post match.

After hopping around clubs a lot in the last 6 or 7 years, Edinho appears settled back at Vitória, who now look to be in a pretty good position to maintain their top division status. With fellow veteran striker Jorge Pires, 37, shining for Portimonense this weekend with a hat-trick of his own, we should get a couple more years out of Edinho yet. He may not be able to complete 90 minutes with the regularity that he once could, but on Thursday he showed just how brutally effective he can be in a potentially pivotal win for his team.