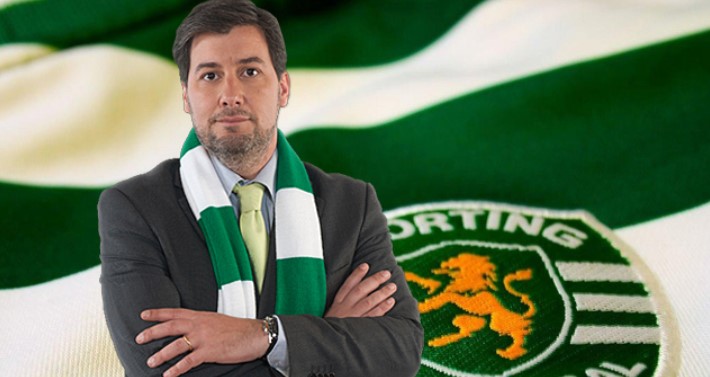 Despite a spirited performance, Sporting lost 2-0 to Atletico Madrid in the first leg of the Europa League quarter-final last night in the Spanish capital. Losing somewhat unluckily to the tournament favourites in the away leg should not be seen as a disaster.

However, what has transpired in less than 24 hours since the final whistle blew at the Wanda Metroplitano has thrown the Lisbon club into complete turmoil.

Sporting’s firebrand president Bruno de Carvalho took to Facebook to vent his frustration shortly after the match, singling out several members of the team for heavy criticism. Today the players responded – also via the social networks – and the upshot is that 18 of the first-team squad have been served immediate suspensions. According to the Portuguese press, the B-team will be used in Sporting’s league game at home to Paços de Ferreira on Sunday.

Sporting coach Jorge Jesus said pre-match that the aim was to take the Europa League tie back to Lisbon still alive, but individual errors from Sporting centre-backs Sebastián Coates and Jérémy Mathieu proved costly, as Koke and Antoine Griezmann took full advantage of the lapses to score two first-half goals.

Sporting fought hard, though, with Bas Dost, Gelson Martins, Fábio Coentrão and Fredy Montero all missing presentable chances to score, although at the other end Rui Patrício had to intervene several times to keep Atlético from increasing their advantage.

Nevertheless, had Montero buried Sporting’s best chance in the dying seconds instead of ballooning the ball over the bar from close range, the result would arguably have been a more accurate reflection of the game and would have given the Portuguese side realistic hope of making progress to the semi-finals at Alvalade next week.

It would also likely have avoided the extraordinary sequence of events that subsequently ensued.

Sporting president Bruno de Carvalho wears his heart on his sleeve. He could not contain his annoyance at the result, posting a message on Facebook lambasting Coates and Mathieu for their mistakes, Gelson Martins for failing to take his chance when clean through, and Fábio Coentrão and Bas Dost for collecting yellow cards that rule them out of the second leg. To paraphrase, he said: “instead of doubling our efforts and being 22 men on the pitch Coates and Mathieu did what Atletico’s forwards couldn’t do, and we were only 9. Fábio and Bas Dost didn’t want to play the second leg, with senseless fouls for yellow cards.”

Back in Lisbon, the atmosphere among the squad was evidently tense, although the club denied rumours the first-team squad had refused to train. But later in the afternoon 18 senior players shared a text on Instagram expressing their disapproval of the public criticism and “the absence of support from he who should be our leader.” Among the group who posted the message were practically all of Sporting’s most important players, such as captains Rui Patrício and William Carvalho, fellow Portugal internationals Fábio Coentrão, Bruno Fernandes and Gelson Martins, and experienced campaigners such as Bryan Ruiz, Coates and Montero.

The public ping-pong match soon had another episode as Bruno de Carvalho got on Facebook again, accusing the players of acting like spoiled children and immediately suspending them.

Bruno de Carvalho has enjoyed virtual unanimous support among the Sporting fanbase since becoming president of the club 5 years ago, breathing new life into a failing institution, sorting out the club’s finances, and making the team more competitive, albeit without delivering the desperately desired Portuguese title – a trophy that has eluded the Lions for 17 years.

But his burning passion for the club and refusal to countenance failure of others – not for the first time – is without doubt counterproductive in this case.

How this will play out is anyone’s guess, but for followers of the Portuguese football in general and Sporting Clube de Portugal in particular, it appears just one more spectacular example of the club’s ability to shoot itself in the foot.

Pete
This comment was minimized by the moderator on the site

He's a total madman he can't continue after this but as a Benfica fan I'll miss him.

BdC has done good work for Sporting but it is time for another president to make the next step.

Possibly the same type of strategy as Arsenal

Who new it took complete meltdown from BdC to galvanize this club.
When your President is more a fan, which is derived from fanatic, there's going to be problems. Even the most hardened Sporting fans have to see that BdC is not good. He's been...

Who new it took complete meltdown from BdC to galvanize this club.
When your President is more a fan, which is derived from fanatic, there's going to be problems. Even the most hardened Sporting fans have to see that BdC is not good. He's been poor in the transfer market so I'm curious of how the finances truly are.
Needless to say, his nuttiness has finally galvanized the squad. Can't wait for the spin he puts on it as his genius plan all along.

Snoker
This comment was minimized by the moderator on the site

This is a very worrying trend for a team that I love. Soon I might have to find another team

Snoker
There are no comments posted here yet