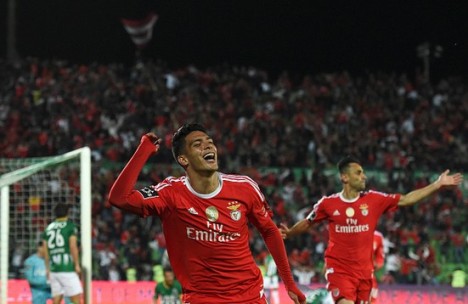 The drama of Week 29 in Liga NOS was primarily reserved for off-the-field events as Sporting fell into near complete meltdown with a very public spat between the players and club president Bruno de Carvalho.

They recovered of sorts to ultimately win their game against Paços Ferreira, while Porto also kept up their title challenge with a straightforward win over Aves.

However, champions Benfica remain on top of the league with a 2-1 victory at Vitória Setúbal, albeit far from an easy one relying on a stoppage time penalty to claim the three points. The star man on the day, and PortuGOAL’s Figure of the Week, was two-goal hero Raúl Jiménez.

Mexican striker Raúl Jiménez has proved something of a cult hero for Eagles fans over the past three years, ever since his big-money move from Atlético Madrid in August 2015.

He’s never been able to truly nail down a place in the XI owing to a combination of injury issues as well as the form of striking cohort Jonas, and previously the likes of Gonçalo Guedes and Kostas Mitroglou, but nevertheless he has regularly supplied key goals off the bench, particularly in the latter stages of title run-ins.

Saturday’s win against Vitória saw him take on the familiar role of hero but in unfamiliar circumstances, earning a rare start after a back injury in the warmup for Jonas forced the league’s top goalscorer to pull out just before kick-off.

This unexpected absence of Jonas seemed to provide a fillip for Vitória, who took a shock early lead in the first half through Costinha. Benfica were level in the 28th minute though, Raúl poaching at the far post having brilliantly anticipated Rafa Silva’s deep cross.

The game looked to be drifting towards a draw as stoppage time began but Benfica were awarded a controversial penalty for a challenge on Eduardo Salvio in the 92nd minute. Raúl kept his composure and found the corner to earn what could prove to be a priceless three points at the end of the season.

Aside from the two goals, what has impressed about Raúl not just at the weekend but throughout his Benfica career has been his movement. He is always looking to make darting runs, while he can also prove a good prospect in the air. His options from the XI have been limited in part due to the relentlessly outstanding form of Jonas, but really someone with his skillset should be playing more regularly. His statistics in 2017/18 alone speak for themselves: 6 goals and 5 assists in his last 12 matches, of which only one was a start.

Raúl will also have one eye firmly on the upcoming World Cup in Russia so this standout performance should give him confidence for the months ahead. With West Ham striker Chicharito, Mexico’s usual first choice striker, having an inconsistent season in England, on current form there is every chance Raúl could earn a starting berth for his side’s opening game with Germany on June 17th.

The way things are going in Portugal, he could also end the season with his third consecutive Liga NOS title with Benfica too.