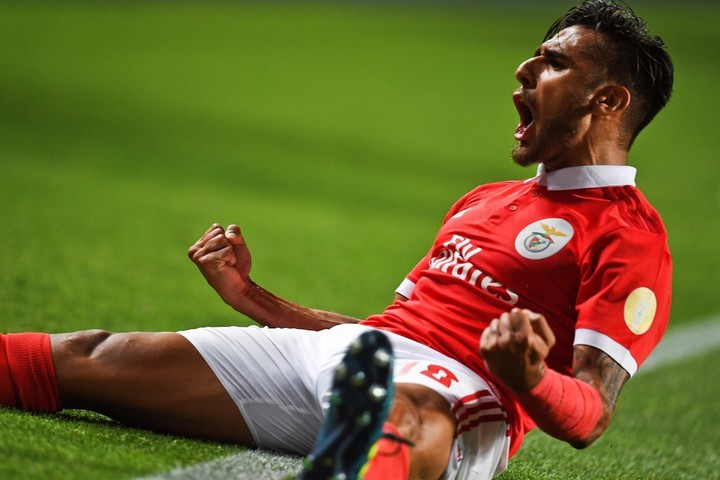 With the Primeira Liga title race now dangerously close to boiling point, all eyes were on what Benfica and FC Porto could do in their respective games, post-Clássico, as Sporting laid in wait of a slip-up from the top two at home to Boavista.

Benfica moved first to claim a victory versus Estoril away from home, although it required 92nd-minute heroics from Eduardo Salvio to get over the line, with third-placed Sporting tucking Boavista away with a 1-0 win on Sunday night.

The majority of the goals were reserved for the Estádio do Dragão, where Porto were able to stick five past Vitória de Setúbal in a 5-1 win and maintain a two-point advantage over second place. PortuGOAL brings you up to speed with this weekend's top action.

In a game equally as important to Estoril, sitting two points away from safety before kick-off, Benfica's objective was crystal clear as they aimed to bounce back from last week's defeat to Porto and apply some pressure on their title rivals.

The Eagles found their way to goal as early as the 9th minute, with Rafa Silva latching onto Andrija Zivkovic's through ball before firing in the opener with a shot across goal from inside the box.

Rafa and Raúl Jiménez intensified the search for a second goal, but the visitors would end up settling for their slender advantage come the half-time break.

Zivkovic and Rafa combined once more for what could've been Benfica's second prior to Renan's save one-on-one, with Estoril ruthless enough to make Rui Vitória's men pay at the other end via Rafik Halliche's volleyed finish in the 63rd minute, to level the score.

Lucas Evangelista nearly completed the turnaround for the hosts just four minutes later with a shot deflecting off Ruben Dias, leaving Bruno Varela beaten before clipping the outside of the post and bouncing wide of the mark.

Benfica continued to find it just as difficult to find a way past Renan until Salvio, emerging inside the box in the 92nd minute, provided the answer with a glancing header from Alejandro Grimaldo's cross to secure a late 2-1 victory.

Buzzing from their midweek semi-final success in the Taça de Portugal versus Porto, Sporting's attentions turned to ramping up the heat, at the very least, on cross-city rivals Benfica, currently occupying one of only two UEFA Champions League spots allocated to Liga NOS clubs this season.

Following Robson's handball inside the box, the Lions' first opportunity came from the spot, allowing Bas Dost to fire his team ahead in the 26th minute with a coolly taken penalty.

Sporting's top scorer eyed up a second, set up by Bruno Fernandes' flick on, but Vagner stopped the Dutchman's half-volley one-on-one, with the Boavista shot-stopper also starring in the 43rd minute to deny Gelson Martins from doubling the score.

Vagner renewed his duel with Gelson early in the second half by batting away the winger's effort from range, just as the hosts' energy levels began to wane. Creativity would evade Boavista on the night, however, concluding the score at 1-0 come full time.

Never too far away from a blistering start at home this season, Sérgio Conceição's men took just six minutes to nip in front against Setúbal as Moussa Marega followed up Cristiano's incomplete save in the 6th minute to tap in from close range.

The Dragons made it 2-0 in the 13th minute after Ivan Marcano's acrobatic effort from a corner met the right dosage of deflections to beat Cristiano, just moments before Yacine Brahimi kept his composure inside the box from Marega's pull-back to add a third after 16 minutes of football.

The 'Sadinos' were able to bite back through João Amaral in the 24th minute, finishing past Iker Casillas with a first-time effort, but Porto's three-goal lead was soon restored by Jesús Corona's deflected effort in the 35th minute.

Porto's fifth and final goal fell to their assist-king, Alex Telles, with the Brazilian showing off his pin-point accuracy to fire past the Setúbal goalkeeper from a 72nd-minute free-kick, as the league leaders drew the curtains on the game at 5-1.