Tyler Boyd, the New Zealander making a splash in Portugal 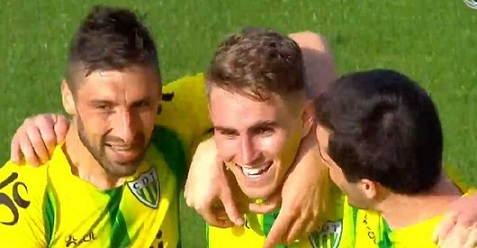 The Liga NOS title race looks set to go down to the wire with all of the “Big 3” securing victories to keep their respective hopes alive.

Down at the bottom it looks equally nail-biting, with Moreirense and Feirense each securing vital wins this weekend. One side who perhaps might have been expected to be in the relegation scrap with them was Tondela, having needed dramatic final day wins to survive in each of the last two seasons.

However, the campaign has been a comparative breeze for Pepa’s men, and they secured their top-flight status for 2018/19 on Sunday with a comprehensive 3-0 victory over Aves. The undoubted star of the show was New Zealand international Tyler Boyd, with two assists and a superb late goal to cap his performance. He is PortuGOAL’s Figure of the Week.

From Australia to Guimarães

The 23-year-old swapped Australian football with Wellington Phoenix for Vitória Guimarães back in July 2015, and after originally starting with Vitória’s B team he has made steady progress as he adapts to life in Portugal.

A season-long loan deal to Tondela was agreed last summer and he had a promising pre-season, going on to start the opening league match of 2017/18. Thereafter he found places in the starting XI hard to come by though, the manager favouring a wing combination of Miguel Cardoso and Murilo. Boyd stuck at it, though, and was able to capitalise on a loss of form and then injury to Murilo in February, and he has been immoveable from the side ever since.

Boyd is comfortable on either flank but has primarily been used on the right side by Pepa and it was from here that he caused all sorts of problems and gave Aves left-back Nélson Lenho the run-around all afternoon on Sunday. Some of his build-up play in the first half was excellent and led to several chances but Tondela were unable to find a breakthrough.

They did break the deadlock in the 56th minute though, and while there was a huge element of fortune to the finish, there was no doubting the quality of the delivery. Boyd’s cross into the box caused panic for Aves centre-half Carlos Ponck and he ended up heading into his own net.

Thirteen minutes later and Boyd had his second assist of the match. From a similar position to the opening goal, the New Zealander whipped in another dangerous ball into the area and this time team-mate Miguel Cardoso was lurking to poke in from close range.

His crowning moment came in stoppage time though when Boyd claimed the goal his display deserved, and in some style too. He had men in support in the box when he cut inside onto his weaker left foot but didn’t need them, bending a superb strike into the far corner.

Unable to make the breakthrough at parent club Vitória Guimarães as of yet, the development Boyd has made over the campaign should give him confidence when he returns to the club in June, or indeed Tondela may look to step up and sign him permanently. His return of 5 goals and 4 assists from 25 matches this season is extremely respectable, especially given he was a starter in only 12 of those appearances.

One way or the other, hopefully he will stay in Liga NOS as he is really beginning to show his potential in what can be a very tough league to adapt to.

As a fan of attractive football I hope Estoril survives the drop. I don't understand how they can play so well against the big clubs but against the minnows they struggle. It wasn't that long ago Marco Silva and...

As a fan of attractive football I hope Estoril survives the drop. I don't understand how they can play so well against the big clubs but against the minnows they struggle. It wasn't that long ago Marco Silva and Steven Vitoria took them to Europa! Sad state they find themselves in.

Ewan
This comment was minimized by the moderator on the site

Really loving this site, thank you to all involved, please keep up the good work!!