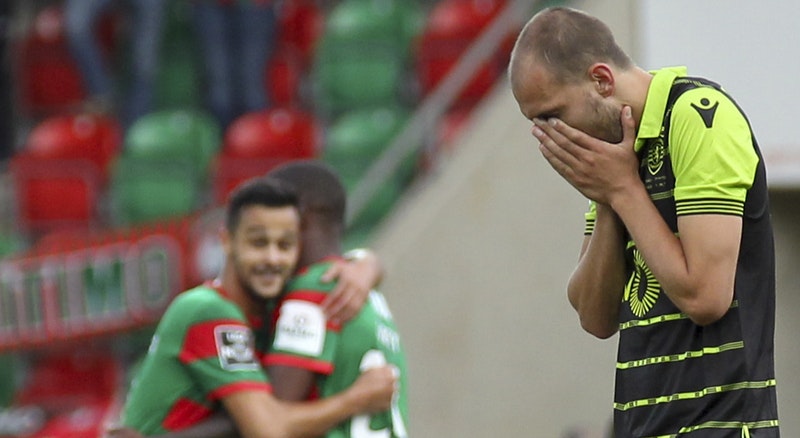 With the finish line firmly in sight, there was plenty still at stake at both ends of the table going into the final fixtures of the Primeira Liga season, as Sporting and Benfica battled for UEFA Champions League qualification and the many millions that a second-placed finish would bring.

Before both Lisbon clubs could try their luck, there was the chance to see the new league champions in action for the last time this season, as FC Porto crowned a successful season with a 1-0 win away to Vitória de Guimarães.

The following day, with all the remaining games being played simultaneously, the biggest shock waves came out of Madeira where Sporting collapsed at the final hurdle to a 2-1 defeat to Marítimo. The result opened the opportunity for city rivals Benfica to leapfrog the Lions, with a second-half Jonas penalty providing the push required to defeat Moreirense 1-0 at the Estádio da Luz, subsequently securing Champions League football next season.

With the destinies of both clubs already mapped out, Porto's final fixture of the season saw them come up against a familiar face in José Peseiro, as Sérgio Conceição, also up against his former club, aimed to close his title-winning campaign out with a victory in sunny Guimarães.

The hosts claimed the first big chance of the game, as Rafael Martins raced through on goal before dragging his shot past the far post in the 15th minute, prompting Porto's response.

Demonstrating similar difficulties in finding the target, Vitória returned to threaten Iker Casillas' goal in the 38th minute, as Heldon spotted Alhassan Wakaso's run into space on the overlap but the Ghanaian produced a tame effort into the keeper's grasp.

With the scores locked at 0-0 going into the break and both sides still misfiring coming into the second period, the Dragons relied on an oft-reliable Alex Telles set-piece to crack the code, as Ivan Marcano rose above those around him to head in the opener in the 70th minute.

The Spaniard's goal stood as the only effort to find the back of the net come full-time, concluding the champion's points tally for the season at a club record of 88, and equalling the outright record accumulated by Benfica two years ago.

In a must-win game for Jorge Jesus' men, Sporting had Benfica's 1-1 draw away to Marítimo, as well as Porto narrow escape in a 1-0 win at the Barreiros, to serve as a warning coming into the final clash of the league season.

Despite a positive start from the Lisbon outfit, the hosts began to make progress via the flanks, leaving Sporting dependent on a crucial block from Rodrigo Battaglia in the 18th minute to deny Gamboa finishing a cross.

Daniel Ramos' team followed up a solid opening half-hour with Diederrick Joel's goal in the 31st minute, the Cameroonian popping up at the near-post to glance a header past Rui Patrício to dip Sporting into third place.

'The Green & Whites' response was well-timed and immediate, as Gelson Martins fed Bas Dost at the back-post for a classic one-touch finish from the Dutchman, taking both clubs into half-time with a 1-1 draw.

A goal for Benfica back in Lisbon ramped up the pressure on Sporting to find a winner coming into the second half, as they struggled to go through the gears against a well-disciplined Marítimo team.

Ideas soon began to run out for Sporting as the clock ticked on, but the worst was yet to come for the Lions in the 92nd minute, with Patrício, so often the saviour at the back, falling foul to a blunder against Gevorg Ghazaryan's toothless strike, allowing Marítimo to dump their opponents out of Champions League contention.

Much like Sporting, all eyes were on a victory at the Estádio da Luz versus Moreirense, at least initially, with Benfica left hoping for Marítimo to go the extra mile to snatch a result against their bitter Lisbon rivals.

The Eagles looked to assert their dominance over their opponents early, with Alejandro Grimaldo, Pizzi and Jonas all near to the opening goal within the first 20 minutes of football.

Moreirense weathered the storm to tighten up as a result, taking both sides into half-time with a 0-0 draw and Benfica still glued to third place. Jonas would change all that, however, as Grimaldo's cross onto Alfa Semedo's arm in the 50th minute was pulled back by the VAR for a penalty, allowing the Brazilian to tuck in a 34th league goal on his return to the first team.

Benfica were now up to second in the table, and a winning goal from Marítimo against Sporting later on sealed Benfica's passage to the Champions League, confirming the Eagles as runners-up for the 2017/18 season.