Benfica and Sporting play out draw 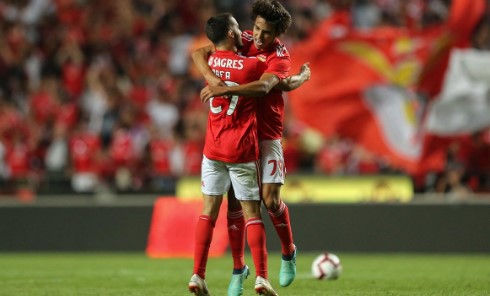 Over 60,000 spectators at a sun-kissed Estádio da Luz witnessed a hotly contested Lisbon derby with honours shared after a 1-1 draw.

Benfica enjoyed most of the possession and created more chances, but it was Sporting who took the lead as Nani converted a penalty in the 64th minute, and it needed a late header from substitute João Félix to rescue a point for the hosts.

The draw leaves both teams with an identical record on 7 points at the top of the table (before Porto's match) after three matches of the new season.

Despite it being early in the season, injuries took their toll on both lineups. For Benfica Jonas and Castillo are still unavailable, meaning Ferreyra continued up top, while for Sporting Bas Dost and Mathieu were unfit with Fredy Montero and André Pinto deputising. Peseiro also gave a first start to Raphinha, as Acuña moved from a wide to a central position.

Heavy early challenges from Ristovski, Battaglia and Acuña showed Sporting were very much up for a battle. In the 6th minute Ruben Dias rose highest from a corner – something that would become a feature of the match – and his header brought a fine save out of Salin.

Moments later play switched to the other side of the pitch and Montero stabbed a Bruno Fernandes cross over the bar. Acuña then tried his luck, skidding a low shot wide after a strong run.

Back came Benfica and Salin produced an even better diving save to keep out a thumping Dias header, and soon afterwards the French goalkeeper was at full stretch again to deny Cervi as Benfica began to turn up the pressure.

In a stop-start game with plenty of fouls chances dried up at both ends, with the most creative players on the pitch – Rafa, Cervi and Pizzi for Benfica and Bruno Fernandes and Nani for Sporting – failing to prize open the opposition defence.

The second half started off in the same vein, with Benfica on top and it needed another fine diving save by Salin to keep out a deflected Pizzi shot.

On the hour mark, and against the run of play, Sporting took the lead. Bruno Fernandes escaped down the right and whipped in a cross, with Rúben Dias bringing down Fredy Montero as he attempted to finish. Nani stepped up and made no mistake from the spot.

Félix to the rescue

Benfica poured forward, helped by attacking substitutions as Zivkovic, João Félix and Seferovic were thrown into the fray by coach Rui Vitória, but Sporting held on with relative comfort - one sharp Salin save from Rafa apart - until the 86th minute.

Rafa found himself in yet another good crossing position, but this time sent over a perfect centre for Félix to rise higher than Ristovski and head powerfully into the net before embarking on an exuberant celebration. The 18-year-old's delight was no surprise considering he had scored his first senior goal in such a big match.

Urged on by the crowd, Benfica continued to flood forward, with man-of-the-match Salin again saving well from a Grimaldo free kick to ensure the Lions took away a share of the points.

By Tom Kundert, at the Estádio da Luz.

Is this the year that we see Feirense win the league? All joking aside, our league has become so diluted that it is no longer worth keeping up with. Instead, personally, I find myself keeping up with all of our players that have gone abroad.

It could be worse - e.g. the hype/bullsh*t surrounding English football makes it unwatchable so I much prefer the Portuguese league. I agree following the players abroad is cool.