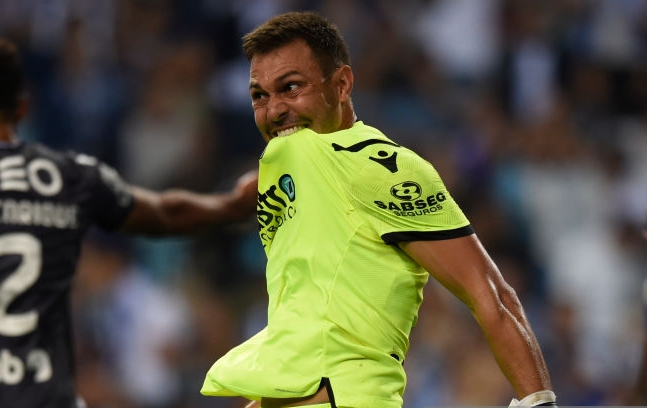 Round 3 of the 2018/19 Liga NOS season was highlighted by the unusual statistic of each of the “Big 3” failing to win any of their respective matches over the weekend. Benfica and Sporting played out a 1-1 draw in the Lisbon derby, while Porto suffered a stunning upset at the hands of Vitória Guimarães, who came from 2-0 down to secure a famous 3-2 victory at the Estádio do Dragão.

The latter was in no short part down to an outstanding goalkeeping display from veteran Vitória goalkeeper Douglas Jesus, who is PortuGOAL’s Figure of the Week.

34 year old Douglas has long been a part of the Vitória setup now, and for the past 2 or 3 years has battled it out with the younger João Silva Miguel, 23, for the number one spot, each having varying spells between the sticks. Douglas looks to have cemented his position for the near future at least though with a brilliant display in one of the club’s most memorable triumphs of recent memory.

He was first called into serious action in the 20th minute, springing to his right tip over Felipe’s downard header.

Porto continued to press forward though and eventually took a 2-0 lead into half time, Douglas powerless to prevent a stunning strike from Yacine Brahimi, while André Pereira’s goal that followed should not have stood.

Vitória came storming back in the second half to take a 3-2 lead, which prompted a Porto attacking onslaught that required Douglas to be nothing short of his best were his side to cling on for all three points. A more routine stop, but the 34 year old still had to be alert to push aside a powerful shot from Óliver Torres in the 92nd minute.

What followed from the resulting corner though was anything but routine, Douglas producing a staggering point blank save to deny Moussa Marega’s bullet header.

Still, his best was arguably yet to come as a minute later Douglas produced his best save of the lot. Porto skipper Héctor Herrera connected sweetly with a left foot volley and somehow the Brazilian goalkeeper pushed his effort onto the post.

As well as being a historic result for Vitória, their first league success at Porto for 22 years, it was a much needed boost for Luís Castro’s side after a disappointing start to the season that had seen them lose their first three competitive matches. Much is expected of the team this season with their aforementioned talented manager in place, as well as a promising squad. They’ve got two tricky fixtures out of the way for the season now with away trips to Porto and Benfica completed, so this should be a source of confidence going forward.

A player of Douglas’ experience will be vital in the difficult moments they will face this season and at 34 he still seems in fine fettle, producing one of his best ever matches in his Vimaranenses career.

I am so happy upsets can still happen in our league!