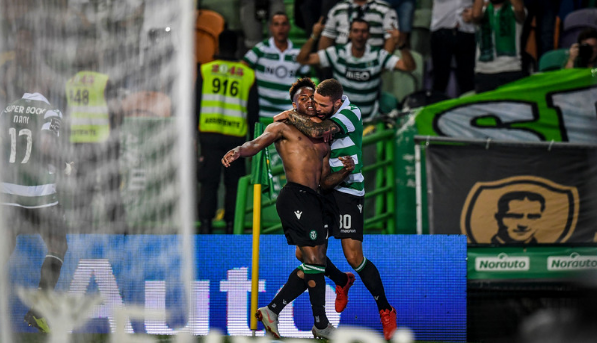 There was to be one final showing of club football before the habitual September international break, with the action at the top of the Primeira Liga taking us to Alvalade first for Matchday Four.

Sporting’s opponent’s, Feirense, claimed their fair share of praise pre-match, and it was justified as they made the Lions sweat before yet another inspired cameo from Jovane Cabral turned the tide for his team, as José Peseiro’s men made it three wins from four games with a 1-0 victory.

The next significant encounter saw Benfica return to the Choupana following Nacional’s promotion to top flight, with the Eagles ensuring they weren’t to be left behind with a cool 4-0 win away from home on Sunday.

FC Porto followed their rivals with a home fixture against Moreirense, as they patched up some of the wounds left from last week’s 3-2 defeat to Vitória de Guimarães by sticking three past Ivo Vieira’s team without reply. PortuGOAL rounds up the best of the action.

Despite all of the concerns circling the green half of Lisbon over the summer, results-wise Sporting had been quietly competent prior to the encounter versus Feirense, who were locked on seven points alongside the Lions.

The hosts’ start was positive, requiring early interventions from Caio Secco and co. before Feirense could fire back with an opportunity of their own, as ex-Vitória de Setúbal striker Edinho struck the frame of the goal from a long-range free kick in the 15th minute.

It was through the veteran forward that Feirense would come desperately close to the opener, on the brink of half-time, as Fabio Sturgeon’s pull-back was blazed over from close range by the 36-year-old.

Sporting’s struggles resumed in the second period, with Secco not helping the situation at all after a fine save from André Pinto’s low volley in the 74th minute. The Brazilian shot-stopper shone once more between the sticks to deny both Rodrigo Battaglia and Sebastian Coates in successive strikes at goal, as Feirense looked to hold onto a point going into the final ten minutes.

Sporting’s persistence would pay off, however, with Raphinha’s trickery from the right opening up an avenue for Stefan Ristovski to hit the byline and cross low for Jovane Cabral to pop up and snatch the headlines with his close-range finish.

A 1-0 victory enabled the Lions to reclaim the top spot, sharing the lead with Sporting de Braga prior to the action at the Benfica game.

After a one-year hiatus from top-flight football, Nacional and their often troublesome Choupana stadium are back hosting some of the nation’s best, as Benfica looked to add to the momentum picked up in midweek versus PAOK in their UEFA Champions League qualifier.

The combinations flowed early on for the Eagles, as both Eduardo Salvio and Haris Seferovic came close to breaking the deadlock, and it was through the two Benfica men that Rui Vitória’s side would go a goal up in the 27th minute via Seferovic - his first goal in eight months.

As half-time beckoned, the Switzerland international and the Argentine swapped roles, as Salvio popped up inside the box to double Benfica’s lead with his head from Seferovic’s cross.

The title hopefuls looked comfortable in the second period before adding to their advantage in the 76th minute through Alejandro Grimaldo, receiving Pizzi’s cross-field pass from the right flank before burying his strike across goal.

Rafa Silva then drew the curtains on the game, as well as the goals, courtesy of Pizzi orchestrating ways, with the winger leaving the keeper with no chance when executing a subtle chip into the back of net to conclude a 4-0 victory in the 93rd minute.

Last week’s debacle to Vitória de Guimarães saw new boy Eder Militão come into the fray for the first time since joining from São Paulo this summer, as Porto welcomed Moreirense to the Estádio do Dragão.

The introduction was on cue for Sérgio Conceição’s men, with Héctor Herrera firing deep into Moreirense’s goal from close range in the 14th minute, as the Dragons renewed their fruitful relationship with set-pieces.

Moussa Marega looked to get himself back into the good books among the fans in the 28th minute only for the inside of the post to keep out his squeezed finish from a tight angle, but it strike partner Vincent Aboubakar gobbled up the chance from the rebound with a simple tap-in to make it 2-0.

More Porto dominance followed in the second period before a couple of scares at the other end had the Dragons’ potentially thinking about surrendering a two-goal lead for a third match running, with Iker Casillas being called into action in the 68th minute.

The third goal ended all doubts about Porto’s victory, as Otávio’s good work from the left received its just reward with Marega’s tap-in in the 94th minute.

First and foremost, it's awesome to have Danilo back! He came back into the team and seemed to fit right back into the 11. I hope he is back to full fitness soon because we have missed a true DM since April.

Eder Militao looked not only solid,...

First and foremost, it's awesome to have Danilo back! He came back into the team and seemed to fit right back into the 11. I hope he is back to full fitness soon because we have missed a true DM since April.

Eder Militao looked not only solid, but like a seasoned vet. The kid seems to be very good. Let's hope he and Felipe/Diogo Leite form a formidable back line.

Maxi still worries me. He is very dodgy defending and we should give Joao Pedro, our new RB, a chance at the starting 11.

Good job on Sporting so far. Jose Peseiro is a bit underrated, but he has often lacked the psychological fortitude to be consistent. It would be good for Sporting if this run continues.