Women’s football on the up in Portugal 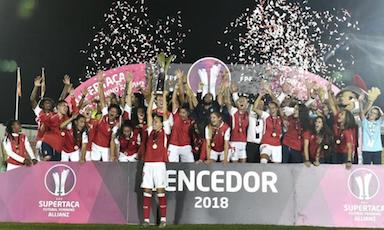 Portugal has contributed so much to the traditional version of world’s most popular sport, be it in terms of some of the best ever players, coaches, club sides and national teams to grace the beautiful game. What about women’s football? In a special report, PortuGOAL maps out all you need to know about the women’s game in Portugal.

Find out about Portugal’s top women’s teams and the fight for silverware, the status of Portugal’s national team, and what to look ahead to this season and beyond.

The women’s game in Portugal started professionally with the 1985-1986 season that resulted in Boavista becoming the inaugural winners. However there wasn’t a league structure, only knockout rounds until the 1993-1994 season and again Boavista were the eventual champions that year. 1º Dezembro currently have the most championships in the tournament’s history with 12, although the Sintra club doesn’t have a women’s side anymore. Boavista follows them with 11; Gatões (a small club based in Matosinhos, Porto) have three. Teams twice crowned champions include Atlético Ouriense (based in Ourém, Santarém), CF Benfica (the team based in the Lisbon borough of Benfica that confusingly plays in red but has no affiliation with the country’s biggest club, SL Benfica) and now Sporting. Another small team, ADC Lobão (from Santa Maria da Feira, Aveiro) also won the title in 1996.

In 2016 the FPF (Portuguese FA) decided to reignite the women’s football scene. In early 2016 they invited all of the then Portuguese Primeira Liga teams to participate. However they only had four vacancies to give to these new teams. The expectation would be that the traditional top four clubs in Portugal would be the ones to respond. Braga were the first to accept the offer, Sporting and Benfica spent time considering the proposal, but in the end Sporting were the only one of the traditional "Big Three" to accept.

Without Benfica or Porto joining, the other Primeira Liga clubs who accepted were Estoril and Belenenses. The FPF added some rules to try and protect the other women’s teams from being raided by the big newcomers, and made the clubs promise to stay in the competition for at least three years with the added caveat that they introduce Under-19 sides to promote youth football.

Since 2016, Sporting has cleaned up domestically, winning the league and cup double in successive seasons as well as last year’s Supercup. Consecutive victories over Braga were the all-important difference, as women’s football in Portugal has been restricted to a two-horse race, for now.

Which takes us to Benfica (the women’s team of the world-famous Benfica – not to be confused with CF Benfica). The new Benfica team made the headlines when they opened their campaign with an astonishing 28-0 win in Group D of the second-tier league. The result made news on the BBC, The Guardian and other international outlets although almost all of them excluded some of the key details. Poor goalkeeper Liliana looked out of place in between the posts, because she was. A police officer by trade and an outfield futsal player should not have to face Benfica’s expertly recruited squad of professional international players (Brazil forward Darlene grabbed 8 goals) mixed in with some talented domestic prospects.

It will be of no surprise should Benfica have similar results this season with their only likely obstacle of note on their way to certain promotion being Sporting’s B team who, of course, cannot be promoted. However, Benfica’s prospects in the Taça de Portugal (Portuguese Cup) will make for interesting viewing as they will likely collide with Sporting or Braga at some point in the tournament.

So, Braga and Sporting are the best two teams in the country and Benfica won’t be far behind. Is there anyone else who could challenge for the Liga BPI this season? The short answer is no. Sporting have yet to lose a game domestically in normal time, whereas Braga have only ever lost to Sporting. So whilst a team like Estoril, CF Benfica (albeit without the prolific Joana Vieira this year), or newly-promoted Marítimo could grab a point from the big two if either have an off-day, it’s highly unlikely they will be able to challenge them for silverware any time soon.

Braga continue to put a heavy emphasis on their futebol feminino team, and kicked off the 2018-2019 women’s season in Portugal with a penalty shootout victory over Sporting in the Supertaça Feminina (women’s supercup) at the start of this month. Francisca Cardoso’s late equaliser for Braga took the game to extra-time and penalties after Tatiana Pinto scored an early penalty to put Sporting ahead. Braga’s penalties were faultless with Patrícia Morais unable to prevent any of them. Rute Costa’s penalty save to stop Sporting’s American midfielder Carlyn Baldwin’s effort was decisive.

It was the first piece of domestic silverware for Braga and the first trophy that Sporting hadn’t won since both teams refocused their efforts into the rapidly growing women’s game.

Lagging behind in Europe

Moving away from the domestic scene and looking to Europe, Portugal still lags behind other leagues despite recent improvements. A Portuguese side has not yet got past the qualifying group stages of the Champions League.

Teams have got close before, 1º Dezembro (who won the league 11 times in a row before dissolving their women’s team), CF Benfica and Ouriense have all tried and failed. This season Sporting were minutes away from progression but an agonising 89th-minute goal from Norwegian side Avaldsnes denied them once again. 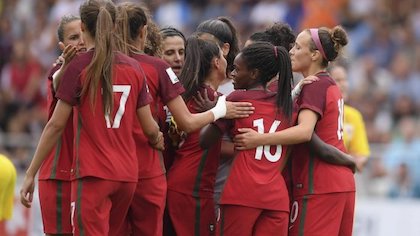 Internationally, Portugal are an improving side but are not able to compete for trophies just yet. Portugal missed out on qualifying for the 2019 World Cup after being drawn in a tricky qualifying group with Italy and Belgium.

However, last summer they made their debut in a major tournament and were unfortunate to be eliminated in the group stages of the European Championship, missing out on 2nd place to Spain on the head-to-head result in a section that included Scotland and England. Portugal’s displays drew widespread praise and pointed to a bright future for Portugal’s women’s national team.

A competitive domestic league with women’s teams able to use the facilities of Portugal’s elite clubs should see continued improvement in the game as it grows in popularity domestically and that can only mean good things to come for the female Seleção.

The domestic season has only just begun in Portugal, and Braga followed up their Supercup victory by pulling off something of a coup with the signing of Matilde Fidalgo. The talented national team right-back, and famously the cousin of Manchester City’s Bernardo Silva, turned down a new contract at Sporting in favour of the northern club. Nevertheless, it seems inevitable that she will become a Benfica player when the Lisbon club is promoted at a canter this year.

Both of the big teams won comfortably on the opening weekend with Braga beating A-dos-Francos 4-0 and Sporting clocking up a 7-0 victory over Ovarense. Can anyone stop the big two? Or will we have to wait a season before we see a 3-horse race for the championship? How will Benfica do in the Taça de Portugal? Will Sporting’s dominance be ended?

It’s going to be the most intriguing season yet, and PortuGOAL will be reporting regularly on women’s football throughout the campaign.

So, you want to know where to start watching Portuguese women’s football this season? Here are the big games you should watch.

28th October: Benfica vs. Sporting B (Benfica’s only tricky fixture for an entire league season)
12th December 2018: Sporting vs. Braga (The current clássico of women’s football in Portugal)
5th May 2019: Braga vs. Sporting (The return clássico and a potential title decider in the penultimate game of the season)
26th May: Taça de Portugal final (Will it be Sporting vs. Braga for a third time, can Benfica make it to the final?)