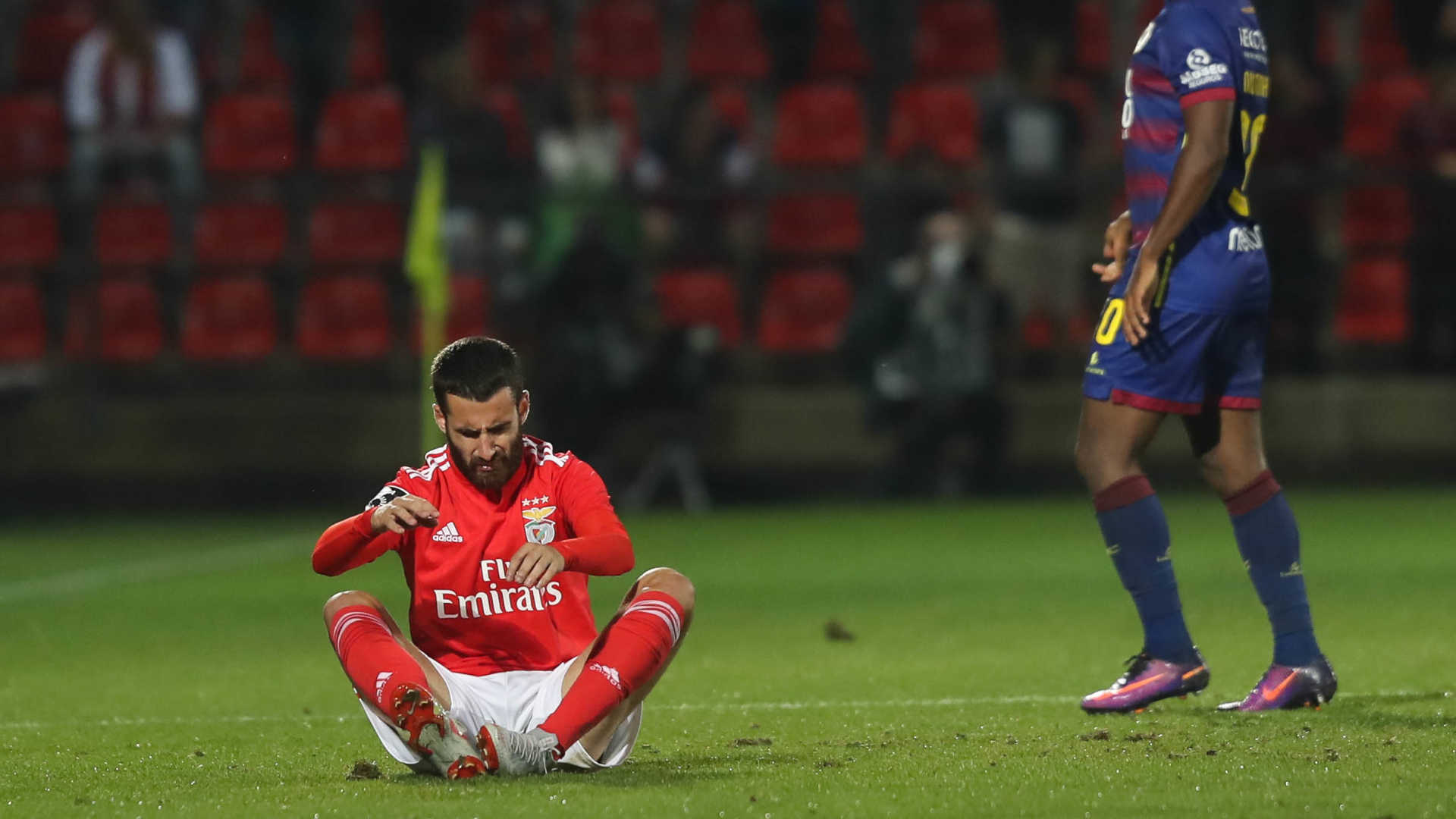 With the hunt for the Primeira Liga top-spot bubbling nicely, attentions turned to what Matchday 6 could bring ahead of another week of European football.

Benfica were the first to take to the stage on Thursday night, away to Chaves, where a stoppage time Gevorg Ghazaryan goal served to take two points from the Eagles in a 2-2 draw. FC Porto took advantage of their rival’s slip-up to climb up to second place with a 1-0 win over Tondela, and Sporting de Braga went one better to defeat Belenenses 3-0 and crown the table for the first time since 2012, then under Leonardo Jardim.

There was also a win in the works for Sporting, beating Marítimo 2-0 in a routine victory at the Alvalade to tighten the gap between them and the top three. PortuGOAL brings you the action from the top of the Primeira Liga standings.

Looking to build on last week’s win at the Estádio da Luz and propel Benfica to the top of the table, Rui Vitória replenished the flanks with the introductions of Franco Cervi and Rafa Silva away at Chaves. The two wide men took just three minutes to repay their boss, as Cervi raced down the left flank before firing in a low cross for Rafa to turn in from close range.

Benfica new-boy Gabriel nearly scored a second in the 27th minute, striking the near-post on the turn from inside the box, as the Eagles saw the 1-0 score-line hold itself through to the half-time break.

Chaves’ reply came in the 76th minute, with Ghazaryan rifling a free-kick into the bottom corner to make it 1-1, but Vitória’s men soon found themselves ahead once more through Rafa, bagging a brace with a shot at the near post after a Haris Seferovic dummy set the ex-Braga man free on goal.

A late lunge from Germán Conti meant Benfica would have to protect their 2-1 lead in the latter stages of the game reduced to ten men, however, as Chaves pressed for an equaliser.

Daniel Ramos’ team reserved their best work for last in stoppage time, with Ghazaryan again providing the goods at the end of a well-worked goal with an ambitious strike past Odisseas Vlachodimos, making it 2-2 with seconds to spare.

The draw saw Benfica drop points for only the second time this season, and opened up an avenue for both Braga and Porto to overtake them at the top of the table.

Following Benfica’s slip-up versus Chaves, it was with good eyes that Porto welcomed Tondela to the Estádio do Dragão on Friday night. Yacine Brahimi and Moussa Marega led the search for the game’s first goal in the first half, with Claudio Ramos starring all throughout the first period.

The Portugal hopeful looked beaten in the 44th minute, however, as Marega squared a pass for Vincent Aboubakar to attack, but the Cameroonian inexplicably caught his studs on the ground before missing his strike-partner’s service completely.

Later, it was the far-post that denied Porto in the final knockings of the first half, as Sérgio Oliveira went close with a header at the near post from a corner.

The majority of the goalscoring opportunities continued to go Porto’s way, with Aboubakar fluffing the best of the bunch in the second half with a header over the bar on the hour mark.

In the 85th minute, the Dragons finally made one count after Ramos was unable to keep ahold of Brahimi’s strike from range, prompting Tiquinho Soares’ follow-up and tap-in finish.

The valuable goal would secure Sérgio Conceição’s team their fifth win of the league season, as a 1-0 victory moved the title holders back up to second place.

A public display of frustration would end up costing Nani his spot in José Peseiro’s first-team squad versus Marítimo, as Jovane Cabral earned his first league start in the captain’s absence.

It was the young winger’s right boot that was behind Sporting’s opening goal, his piercing pass allowing Raphinha to round the goalkeeper one-on-one before Amir brought him down for an obvious penalty in the 11th minute.

The responsibility from the spot fell to the Lions’ new skipper, Bruno Fernandes, who made no mistake to put his side a goal up.

Fredy Montero doubled Sporting’s lead in the 35th minute, as Raphinha’s whipped free-kick fell kindly for the Colombian to tap in from close range.

The hosts’ grip on proceedings would wane in the second period, however, but with neither side able to add to the scoreline, a 2-0 win at the final whistle enabled Sporting to come to within a point third-placed Benfica.

Abel Ferreira’s men started the game knowing a win would take them clear at the summit of the table and the pressure initially seemed to get to them as Belenenses, playing at their temporary Jamor national stadium home, began brightly and were unlucky not to take the lead, twice hitting the woodwork.

But from the moment Wilson Eduardo converted a Ricardo Horta cross from close range in the 27th minute Braga took a firm grip of proceedings. Belenenses goalkeeper Muriel Becker (older brother of Liverpool goalkeeper Alisson) will feel he should have done better but it was just the start of a match to forget for the Brazilian goalkeeper.

Just a few minutes after the opener a careless pass by Muriel in his own box gave the ball away to Dyego Sousa, who found Ricardo Horta and the attacking midfielder confidently rifled the ball into the net to give Braga a comfortable 2-0 half-time lead.

Muriel’s nightmare night was completed midway through the second half as his clumsy challenge on Horta - who was involved in all three goals - led to a penalty that Wilson Eduardo slotted into the net to rubber-stamp the victory.

That's more like it, a much better all-round performance and more what i'd expect from Porto, though Tondela had their moments. So many chances created, open attacking play and moving the ball quicker. I like the look of Otavio through the middle...

That's more like it, a much better all-round performance and more what i'd expect from Porto, though Tondela had their moments. So many chances created, open attacking play and moving the ball quicker. I like the look of Otavio through the middle and this could be something to work on. Sergio once again was a goal-threat and Tiquinho came on to take advantage of the physical work done by Aboubakar. Herrera was more like his normal self.
The one worry was going to the corner flag in the final minutes... against Tondela? At home? I know making sure of the points is important but this betrays the recent lack of confidence. Galatasaray is going to be a tough game.

Larry, Moe and Curly have fallen.