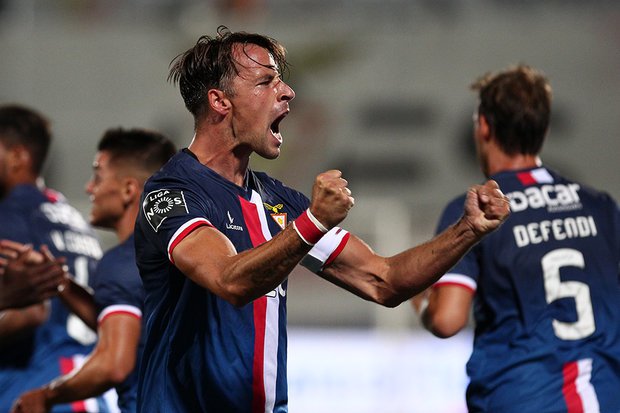 An entertaining weekend of action in Liga NOS served up a host of contenders for this edition of PortuGOAL’s Figure of the Week. Four players hit two goals in impressive performances: Wilson Eduardo helped Braga stay top against Belenenses, Carlos Vinícius continued his excellent start with Rio Ave, while Gevorg Ghazaryan and Rafa Silva each bagged two goals in probably the game of the round as Chaves and Benfica drew 2-2.

However one player went one step further and takes the title this week. Aves secured their first victory of the campaign in a 3-0 triumph over Portimonense, all goals coming from the unlikely source of central midfielder Vítor Gomes.

Gomes has been a solid if perhaps unspectacular player over the years with Liga NOS sides Belenenses, Moreirense and Rio Ave. This experience has proved valuable for Aves, whom he joined since their promotion to the top flight in 2017. The squad has experienced considerable change since his arrival although the 30-year-old has been a consistent fixture in the XI for boss José Mota, helping them to avoid relegation last season and also win the Taça de Portugal for the first time in the club’s history.

Describing him as unspectacular is not to do him a disservice, more used in the sense that his attributes and skills are often of the type to go unnoticed. Passing, energy and tackling in midfield are his best features for Aves, which is why his stunning goalscoring turn was such a surprise on Monday night.

Aves had really been struggling this season and were desperate for this first win. They got the ideal start to go 1-0 up in just the 8th minute, Gomes taking on the role of poacher to tap in from close range, after Rodrigo Defendi’s header had rebounded off the post following a corner.

Into the second half Gomes forayed forward again to double the home team’s lead. Twice he got a little fortune, an initial attempt coming back his way, before his second effort took a sizeable deflection on its way past Leonardo in the Portimonense goal.

While his first two goals were not particularly memorable, Gomes crowned his performance and sealed the win with finely taken third in the 75th minute. He met Amílton’s cross into the centre, and expertly guided a header into the corner.

Gomes was named as stand-in captain for the match, with regular leader Nelson Lenho having lost some form, and he couldn’t have led the team any better in what could prove to be a season-turning win.

Vítor Gomes might not be a name that grabs the headlines in Portuguese football but this reflects his hardworking, unselfish role in his team. For once though, the understated skipper deservedly took centre stage on an important night for Aves.