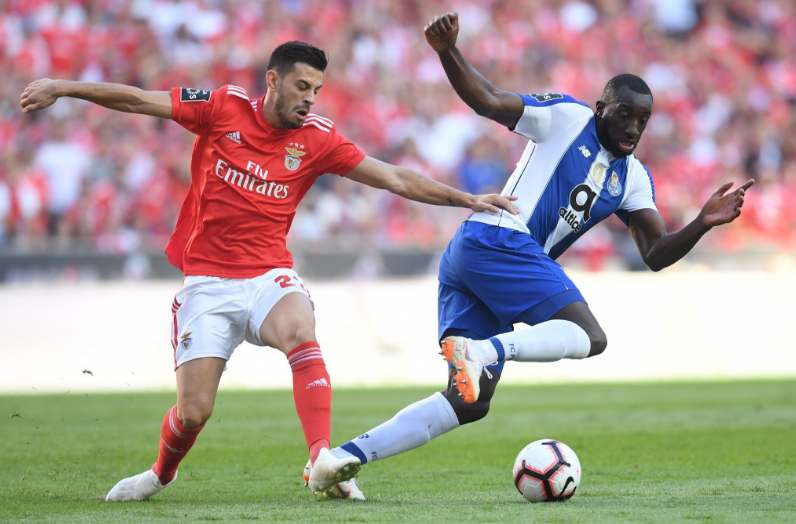 Benfica returned to the summit of the Primeira Liga table after a second-half goal from Haris Seferovic handed the Eagles a 1-0 win over FC Porto at the Estádio da Luz, this evening.

Following Sporting de Braga's 1-1 draw to Rio Ave on Saturday night, the two giants locked horns in a direct dispute for top spot before the upcoming international break, as both sides played out a goalless first half.

Seferovic stepped up to tip the balance for the hosts in the second period. The Eagles were tasked with defending their lead with 10 men after Cristian Lema's red card late on, but Porto failed to hit back.

With top-spot at stake, absences at the back for Benfica saw Rui Vitória place his trust in Cristian Lema alongside Rúben Dias at the heart of the defence, as Porto's Tiquinho Soares stepped in to test the duo following the long-term injury sustained by Vincent Aboubakar last week.

In a tentative start to the game, insignificant attempts at either side of the pitch from Lema and Soares were as close as the Estádio da Luz got to a chance in the opening half-hour, as Benfica tilted the balance of possession in their favour throughout the tight opening.

Porto turned to the oft-reliable set-piece from Alex Telles to shake things up, with the Brazilian full-back providing an inviting corner in the 37th minute, but Danilo Pereira's glancing header well wide of the target prolonged the wait for a goal.

The Eagles were able to conjure up something far more clear-cut in the 43rd minute when Franco Cervi's first-time pass set Seferovic racing through on goal, but the Swiss striker, in addition to being caught offside, arced a shot wide on his left foot to maintain the stalemate going into the half-time interval.

More intensity was introduced in the second half and with it almost came the game's first goal on the hour-mark, as ex-Leganés man Gabriel forced a big save out of Iker Casillas with a half-volley from the edge of the box.

Benfica followed up with their appetite for goal and finally broke the deadlock just two minutes later, as Pizzi placed Seferovic one-on-one, ahead of the chasing Éder Militão, prior to the ex-Eintracht Frankfurt man's finish at the near-post.

The Dragons attempted a reply via another set-piece, with Danilo again the target for Telles, but the defensive midfielder could only head wide when rising above his markers in the 74th minute.

A twist in the tale saw Benfica go a man down for a third consecutive game, following Lema's second bookable offence for an 82nd-minute foul on André Pereira, as Brahimi looked to ramp up the pressure on the hosts minutes later with a curling effort from the left flank.

The head of Danilo had the last say in the encounter, as his attempt floated over the bar on the brink of full time, allowing Benfica to celebrate their return to first place with a 1-0 victory.

A massive three points against a physically imposing yet technically limited Porto side. All 11 players put in a solid shift, but Ruben Dias in particular was absolutely outstanding. A true captain's performance from the hard-core Benfiquista....

A massive three points against a physically imposing yet technically limited Porto side. All 11 players put in a solid shift, but Ruben Dias in particular was absolutely outstanding. A true captain's performance from the hard-core Benfiquista. While many may criticize his aggressive approach, no one can deny the kid's overall quality. He's an excellent defender and a natural-born leader.

Benfica have been the best team in Portugal thus far, and with the Jonas and Krovinovic waiting in the wings, we're only bound to get better.

Yess, finally a win against Porto, how long ago is that. Gives me positive energy for days, and confidence for this SLB-season. Porto will really mis Aboubakar this year, Benfica missed the length of Jardel in the end of game, hope he'll return ...

Yess, finally a win against Porto, how long ago is that. Gives me positive energy for days, and confidence for this SLB-season. Porto will really mis Aboubakar this year, Benfica missed the length of Jardel in the end of game, hope he'll return before the matches versus Ajax, cause they'll mis Dias and Grimaldo also in Amsterdam.

Big win for Benfica and well deserved. I am surprised you didn't mention how much of a joke that red card was.

Deserved win for Benfica. They were organised, pressed hard and their positioning gave Porto nowhere to go.
Marega cant lead the line and quite a few players are still way off their best. Aboubakar is going to be a HUGE miss this season.