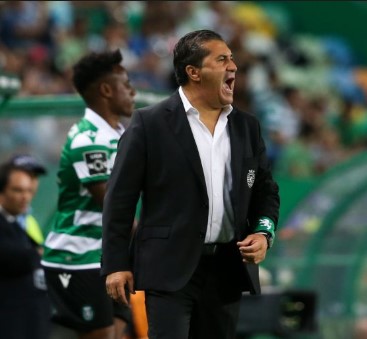 José Peseiro has been sacked in the wake of a harrowing Halloween night performance by Sporting, who fell to a 2-1 home defeat against second-tier Estoril at Alvalade on Wednesday evening.

Almost a full day after the news broke, no official confirmation has been forthcoming from the Lisbon giants, but all Portuguese media are reporting that the 58-year-old was relieved of his duties in the early hours of Thursday morning.

The decision was made by president Frederico Varandas a few hours after the final whistle had sounded in the Taça da Liga match, which triggered an angry reaction by the meagre crowd of 10,000 fans who had turned up for the game, with most of their ire aimed at coach José Peseiro.

White handkerchiefs were waved while the hardcore ultras in the stands chanted for Peseiro to hand in his resignation. The fans would have been further incensed by Peseiro's post-match interview, when he opined that Sporting had played well, had created most of the chances, and had deserved a better result.

For those who had witnessed the tepid display it was a surreal take on the game. Sporting had been outplayed by the team a league below them, with Estoril's enterprising attacking frequently cutting through Sporting's meek defence. Only some fine goalkeeping from Sporting number one Romain Salin prevented a more embarrassing scoreline.

Looking at the bigger picture, Peseiro has paid the price for failing to make progress with the team since he took over in the summer. A good start in terms of results - 5 wins and 1 draw (away at Benfica) in the first 6 matches of 2018/19 in all competitions - masked a series of drab displays. While the poor performance level was somewhat understandable, even excusable, given the tumultuous summer and player turnover in the close-season, the lack of any signs of improvement proved Peseiro's downfall.

Defeats to Braga, Portimonense, Arsenal and Estoril in a short space of time evidently led Varandas to conclude that the coach was incapable of building on the promising start.

Tiago Fernandes, son of Sporting legend Manuel Fernandes and part of the youth coaching set-up, has been put in temporary charge of the first team in preparation for the weekend match in the Azores against high-flying Santa Clara.

Speculation has been rife about Peseiro's successor. Varandas has stated he is a personal friend of Leonardo Jardim's, and the former Sporting and Monaco coach would be welcomed back to Alvalade with open arms by the fans and everyone connected to the club, but the Madeiran enjoys an excellent reputation after working miracles at the Ligue 1 club and is expected to wait for an opportunity in a more high-profile league.

Other names that have been thrown in the mix include former Portugal international Paulo Sousa, currently unemployed after a stint in China, José Mourinho's former assistant Rui Faria, Portugal U21 coach and former Sporting player Rui Jorge, and even Jorge Jesus, who only left the club in May and is currently working in Saudi Arabia.

This guy has been sacked from pretty much every club. It's going to be harder for him to get decent management jobs. Looking at his Wikipedia, he's been at a different club every year pretty much.

However, he always seems to be lacking in psychology. I think he tries too hard to be a disciplinarian and doesn’t focus...

However, he always seems to be lacking in psychology. I think he tries too hard to be a disciplinarian and doesn’t focus enough on galvanizing the team.