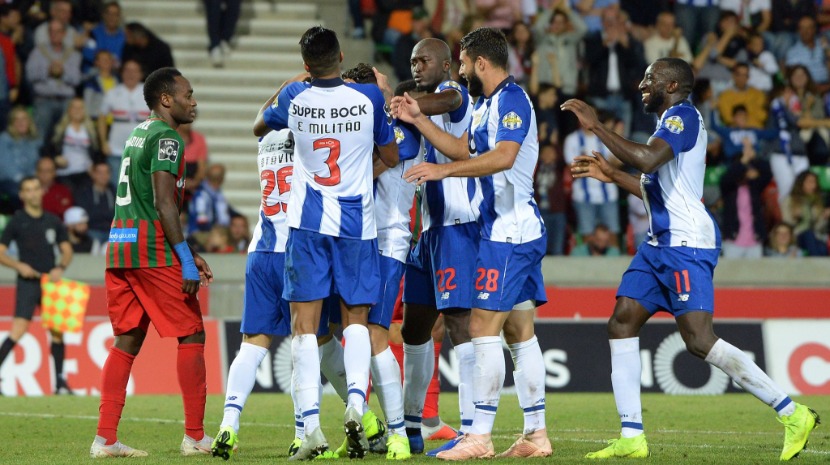 In a week where Portuguese football claimed its first managerial casualty, following the sacking of Sporting’s José Peseiro, the pressure was also ramped up on others dotted within the Primeira Liga top-spots, none more so than at the helm of Lisbon rivals Benfica.

Rui Vitória did his cause no favours after a first-half upset that saw the Eagles fall at home to Moreirense with a 3-1 defeat; a result FC Porto later capitalised on with a 2-0 win away to Marítimo to hold onto first place.

Sporting also took advantage of Benfica’s slip-up, under the temporary management of Tiago Fernandes, climbing up to third with a 2-1 win away to Santa Clara, as second-placed Braga kept in touch with Porto at the top with a 2-1 victory of their own over Vitória de Setúbal on Sunday night. Here’s the peak of the weekend action.

Following two consecutive defeats in all competitions, Benfica boss Vitória has had to bear streams of speculation concerning his future at the club but an early goal from Jonas, assisted by the young João Felix, promised to rubbish all the talk, as the Eagles pulled ahead at the Estádio da Luz just two minutes in.

Moreirense restored the panic with five minutes, however, with Chiquinho stroking a side-footer from the edge of the box low into the far corner to level the score.

Rafa Silva was a goal-line clearance away from restoring Benfica’s advantage with a lob over Jhonatan in the 6th minute, with the team from Moreira de Cónegos souring the mood further in the 16th minute following a quick dash down the right flank by Arsénio, whose low cross required just a finish from Pedro Nuno at the back-post to put the visitors 2-1 up.

Ambition paid off for Moreirense, who by the 36th minute had a shock 3-1 lead to take into the break, as Mamadou Loum found the back of the net from range when driving low at goal.

The Estádio da Luz demanded a reaction from their side in the second half but it never came, as Benfica, later down to ten men following Jardel’s straight red card, clocked out to a chorus of boos and whistles following a 3-1 loss.

News of Benfica’s debacle meant that Porto could extend their advantage over the Eagles to four points with a win over Marítimo, as they took to Madeira on Saturday evening. That task was easier said than done, however, as both sides entered the break with a quiet 0-0 draw on their hands, with Porto calling on Otávio to flip the script in the second period.

Moussa Marega wasted the chance to give the Dragons the lead from the spot in the 65th minute, following Amir Abedzadeh’s save, but the Malian was on hand to serve Otávio five minutes later, allowing the Brazilian to burst into the box before firing in the opener.

The ex-Internacional midfielder then returned the favour to the Porto forward in the 73rd minute, who just about managed to evade the retreating defenders who went all out to deny Marega’s tap-in from entering the back of the net against his former club to make it 2-0.

Marítimo, who were already fortunate not to have gone a man down in the first half, following Lucas Africo’s challenge on Alex Telles, would eventually end the game reduced to ten man, as the experienced Danny picked up a late red to conclude a 2-0 score-line.

In treacherous conditions, manager-less Sporting were tasked with bouncing back from their midweek demise at home to Estoril in the League Cup in a clash against surprise-package Santa Clara, sitting pretty in 6th.

The Lions looked to make good use of the wind by showering the hosts’ goal with shots, as Bruno Fernandes went close, but instead it was the home side who’d find a way to use the weather to their advantage, as a ball over the top by Osama Rashid hung up nicely for Zé Manuel to volley in the opener deep inside Sporting’s area.

A good chance missed by Bas Dost in the 42nd minute meant the Lisbon outfit would head into the break with some thinking to do, before the Dutchman himself provided the solution in the second half when winning his side a penalty on the hour mark. Dost made no mistake from the spot, equalising for Sporting, as the sheer outrage over the decision to award a penalty earned Santa Clara man Patrick Vieira a red card.

The Green and Whites turned the score on its head in the 75th minute, as Jovane Cabral’s in-swinging cross fell perfectly for Marcos Acuña to nod home at the back-post, inviting a reaction from the Azoreans.

Santa Clara rose to the task, going close in the 92nd minute with Rashid’s shot flashing just wide of the target, but they would ultimately fail to respond to Acuña’s winner.

Much like Porto, Sporting de Braga had their eyes on distancing themselves from Benfica on Sunday night with a victory over Vitória de Setúbal, who made the journey north to the Estádio Municipal.

The hosts had the bar rattling after just one minute of play, with Fransérgio taking aim from range, but instead it was another former Marítimo Brazilian who would do the honours of breaking the deadlock, as Dyego Souza took flight inside the box to nod in the opener in the 15th minute.

A well-worked move saw Eder Bessa level things for his side in the 18th minute, however, reviving Braga’s search for the all-important lead in stormy conditions. Fábio Martins nearly restored Braga’s lead on two separate occasions before Dyego Souza provided the goods again in the air, this time aiming his header into the far corner in the 40th minute.

A handful of Tiago Sá interventions enabled Braga to lock up a 2-1 score-line in the second half, as they followed Porto to the summit of the league table on 21 points.

Only saw the first half so missed the goals but last seasons urgency and “zip” is returning. Corona is full of confidence, Oliver Torres is starting to show his abilities in running the game and Brahimi is now back. Alex Telles still doesn’t look...

Only saw the first half so missed the goals but last seasons urgency and “zip” is returning. Corona is full of confidence, Oliver Torres is starting to show his abilities in running the game and Brahimi is now back. Alex Telles still doesn’t look quite right but I wonder if Sergio has told him to be less adventurous this season. Looks like Hector wont be getting many games as they plan to sell him in January (Roma/Inter/Arsenal?) since he isn’t signing the contract so Oliver Torres will now get his chance. One minor complaint is Danilo whining at the ref, he does it far too much and is picking up stupid yellow cards.

Back at the top of the table!