Sporting’s football factory showing no signs of slowing down 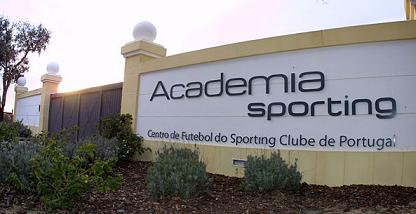 Trophies may have been few and far between for Sporting in the last two decades, but the Lisbon club have been the standard-bearers for producing Portuguese talent in that time. One need only look at Portugal’s World Cup squad, which contained eight members who came through the club’s famed academy. And the production line shows no sign of drying up.

Previous Sporting President Godinho Lopes made the inexplicable decision to forsake Sporting’s youth players in favour of foreign imports during his catastrophic mandate. Thankfully, the new regime led by current President Bruno de Carvalho saw the error of his predecessor’s ways and promised a return to this club’s philosophy of promoting its youth players.

In mid January, two days after Mané had scored a spectacular goal on his full debut against Marítimo in the Taça da Liga, the then coach Leonardo Jardim said the following:

“When Sporting hires a coach, one of his tasks is to develop the club’s youth players. It’s not just Carlos Mané. We have other youngsters playing in the senior team who came through the academy. We believe that in terms of the club’s structure, our future is very dependent on our academy. We have many other players either playing in the B team or in the juniors who will be promoted to the first team in the near future.”

That Sporting nurture their home-grown talents better than any other Portuguese club is undisputable. Portuguese football website Maisfutebol published the following graph in January showing just how much faith the Lions put in their young cubs in comparison to Portugal’s other two grandes, Benfica and FC Porto.

William Carvalho’s outstanding debut season has had many a Portuguese pundit drooling that he is set to follow in the footsteps of fellow Alcochete alumni Luís Figo and Cristiano Ronaldo by reaching the very top of the game. But there are more.

Five potential stars of the future

The five players profiled below began 2013/14 as B team players, but the combined value of their contract buyout clauses is a staggering 240 million euros. By the end of the season Carlos Mané and João Mário (on loan at Vitória Setúbal) had made the step up and performed commendably in Portugal’s top flight.

His left foot is so cultured it would be a museum curator if it wasn’t attached to the end of Iuri Medeiros’ leg. An exciting, skilful, dynamic winger with a fiercely competitive spirit, Medeiros, born on the small island Faial, has a fair chance of becoming the most famous footballer from the Azores since Pedro Pauleta. He has been at Sporting’s academy since he was nine years old and has represented Portugal at every age group so far. He is an excellent finisher, free-kick taker, crosser and passer of the ball, almost always with that magical left peg that has already authored numerous stupendous long-range goals. He was named MVP in the 2013/14 pre-season Taça da Honra tournament, where Sporting, Benfica, Belenenses and Estoril used a mix of senior and B-team players, with Medeiros scoring the decisive goal in the final as Sporting lifted the trophy. His first-team debut is not far away.

Goals, goals and more goals. After being spotted at just 11 years of age and integrated into the academy, Betinho has shown no let-up in the incredible regularity with which he finds the back of the net, continuing to average a goal a game as he progressed through the U15, U16, U17, U18 and U19 age groups. Possessor of a sound technique and strong shot, it is his movement and positioning in the box and ice-cool finishing that marks him out as that rarest of commodities in Portuguese football – an out-an-out striker with a lethal eye for goal. Success in the Next Generation Series (top scorer in the group phase of the competition) was followed up with a smooth transition to international football. He was Portugal’s top scorer in the U19 European Championship qualifying stage (8 goals), and has since taken his bow at U21 level, scoring twice in four games. His first full season at senior level was slightly disappointing, notching 7 goals in 32 matches for Sporting B in 2012/13, but the following year his 9 goals in 17 appearances were enough to persuade top-flight Vitória Setúbal to take him on loan for the rest of the season, only for injury halt his progress. Betinho’s massive buyout clause shows how highly rated the striker is.

Lisbon-born Mané must consider Sporting a true second home, having started out at the club’s football schools at just seven years of age. Given his technical ability, speed and fearlessness when taking on opponents in one-on-one situations, you could say that being at the world’s greatest factory of world-class wingers (Futre, Figo, Simão, Ronaldo) makes perfect sense. He first hit the headlines with a dazzling display against Liverpool in the Next Generation Series, and has continued to progress prodigiously, with a string of coaches saying his hard-working and level-headed attitude provides as much hope for a glittering future as his undoubted ability. He made his full debut for Sporting against Marítimo in January, which he marked with a spectacular goal, and followed that up with another goal in his second start, becoming a regular for Leonardo Jardim’s team in the second half of the season.

At the academy since 13 years of age, Esgaio has played and excelled at every age level for Sporting. Esgaio can play anywhere along the right flank. He has switched regularly between full-back, right-sided midfielder and an out-an-out winger throughout his time at the academy. A potent mix of natural talent, speed, aggressiveness and calmness under pressure (an expert penalty taker), he has the highly impressive and perfectly symmetrical scoring record of 33 goals in 66 matches for the B team and is a regular starter for the Portugal U-21 side. He is considered one of the academy’s biggest “certainties” for a huge future in the game. He made his senior debut on 7 December 2012 in the 2-1 victory against Videoton in the Europa League.

Initially belonging to FC Porto’s youth set-up, João Mário moved to Sporting along with his brother Wilson Eduardo when their mother moved to Lisbon. The brothers were young teenagers. Mário has all the hallmarks of a midfield general in the making. With the ball at his feet and his head up, he reads the game well, and his faultless technique allows him to take full advantage of quick and creative thinking in the most congested of midfields. After captaining both the Sporting B team and Portugal at U19 and U20 level, Mário was handed the opportunity to hone his talents in senior top-flight football when he was loaned to Vitória Setúbal for the second half of 2013/14. The result could hardly have been better. An uncontested starter in Vitória’s excellent end-of-season run, Mário’s efforts earned him a surprise call-up to Paulo Bento’s provisional 30-man Portugal squad for the Brazil World Cup.

More where those came from

However, Sporting fans are not pinning their hopes solely on the above-mentioned quintet. Richard Cole (twitter: @leoeslions) is an expert in all things Sporting Clube de Portugal, and is an avid watcher of the Lisbon club’s games at senior, B team and youth level. He is excited about the latest crop of prodigious talents at Sporting.

“Of the five players listed above, who are certainly the most promising of Sporting’s current crop of youngsters, I think Ricardo Esgaio and João Mário have the biggest chance of making it big in the Sporting first team and beyond.

Ricardo Esgaio has shown incredible versatility (right-back, right-wing, right-midfield and sometimes even centre-midfield) and an astonishingly lethal touch. For someone who isn’t an out and out striker his goal-scoring ratio at this level is remarkable even if he happens to be the B team’s designated penalty taker (for good reason). Esgaio has shown great maturity and although he did not get as much first-team game time this season as he did in the quickly forgotten 2012/2013 season, he is surely going to become a regular feature soon.

It seems João Mário’s star is already rising rapidly after featuring in Paulo Bento’s World Cup long-list ahead of team-mates Adrien Silva and André Martins. For a while it looked like João Mário could be looking to leave the club when at the start of last season he failed to feature in as many B team games as would be expected. However his hugely impressive loan spell at Vitória de Setúbal has shown just what talent he has and surely he will breaking into Paulo Bento’s squad within the next few years.

Outside of those picks there are a few more young Sporting players that you could be hearing a lot more of soon.

First is Filipe Chaby, the 20-year old creative midfielder excelled in the youth teams especially during the now-defunct NextGen series. Unfortunately his time in the B team has been interrupted by injury that has slowed down his development. It started with knee ligament trouble back in 2012 that forced him to spend several months on the sidelines and since then some more minor injuries have reduced his game time. Yet when he gets going you can see the pace, ability, and incisive passing (Xavi-esque) that he possesses – he looks like he has an incredibly promising future. The only hope is that he is able to fulfil his potential without being hampered by more injuries.

Sporting’s upturn in fortunes last season has led its fans to genuinely believe that the club will now be jostling with Benfica and FC Porto for silverware on a regular basis. Whether or not that is the case remains to be seen. But judging by recent history and the current set of academy youngsters, one thing is certain. Exciting talent with a big future in the game will continue to roll off the Alcochete conveyor belt.

Fantastic article. I always enjoying reading about young up-and-coming Portuguese talent. While i love that we are continuing to produce a number of classy wingers and midfielders, I really hope that guys like Betinho end up realizing their full...

Fantastic article. I always enjoying reading about young up-and-coming Portuguese talent. While i love that we are continuing to produce a number of classy wingers and midfielders, I really hope that guys like Betinho end up realizing their full potential. Portugal's striker issues are well-documented and this should be a key area of focus for the country's various youth academies moving forward, if it isn't already. Either that or maybe they should consider placing a greater emphasis on a false nine type of formation. In any case, we have a look to look forward to with these Sporting players, and that's without taking into account other great young Portuguese talent like Marcos Lopes, the beautifully-named Ivo Rodrigues, a number of other U19 Euro players and others. Hope to see more of these articles in the future!

Fresh
This comment was minimized by the moderator on the site

I only heard of Tobias Figueiredo off of the game Football Manager and that game is pretty accurate of who's going to be a serious talent. I hope he turns out to be a stud for whoever and good enough to be called up for Portugal.

Fresh
There are no comments posted here yet