Porto youths waiting in the wings 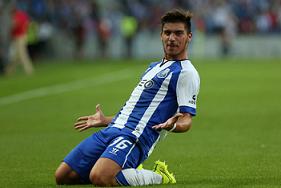 In the latest in our On The Rise series, Sam Biggers looks at some bright prospects from FC Porto’s youth set-up.

Porto is a side crawling with talent at the moment. After last season’s disappointment, new coach Julen Lopetegui was given licence to strengthen the squad significantly, bringing in big names from clubs like Barcelona, Real Madrid and Atletico Madrid.

But beyond all the talent brought in from foreign climes, Porto has an arsenal of top-quality youngsters, the standard-bearer Rúben Neves having already broken into the senior side. PortuGOAL presents five of Porto’s most promising youth players.

He may be the youngest player on this list by some margin, but 17-year-old Rúben Neves has proved that if you are good enough, your chance will come. The central midfielder was an unexpected call-up for Julen Lopetegui’s pre-season preparations, and his inclusion in Porto’s first league game against Marítimo was even more of a surprise. How did he respond? With a man-of-the-match performance and Porto’s first Primeira Liga goal of 2014/15. Superb displays against Lille in both legs of the Champions League play-off provided further evidence Neves is the real deal.

The fact Neves has been regularly selected in spite of Porto’s aforementioned heavy outlay in the transfer market this summer speaks volumes about his potential. Sound positioning, excellent ball-retention skills, a fine passer and a calm head – even in high-pressure situations – augurs for a brilliant future for the Portuguese midfielder.

Tomas Podstawski was born in Porto, the son of a Polish father and Portuguese mother explaining his un-Portuguese name. He captained the Portugal U-19 team to a second place finish at this summer’s European Championship. Having debuted for Portugal U-19s at the age of 17, Podstawski has amassed over 30 appearances for the team. On top of this, he accumulated 24 appearances for Porto B last season, though mostly as a substitute. This season appears to be different, however. After his very solid performances for the Seleção, it would be silly for Porto to not give him playing time.

The midfielder exudes the qualities of a leader, with many analysts tipping him to become the future Porto captain. Besides evident leadership qualities, Podstawski is formidable in the air and possesses promising positional and passing ability. Much like William Carvalho, Podstawski is comfortable in possession, so much so that the match almost seems to slow down when he receives the ball.

The son of former Portuguese international striker and current coach of Vitória Setúbal, Domingos Paciência, Gonçalo looks to be following in his father’s footsteps. Paciência junior arrived at Porto aged nine while his father was working as one of the club’s assistant coaches. He has been at the club ever since, and has worked his way into Porto’s B team.

Last season Gonçalo won the starting striker position for the second half of the season, making 19 appearances and scoring 5 goals. As a result of his impressive, though not prolific, performances, Gonçalo was called up by Julen Lopetegui to take part in the senior team’s pre-season. Injury problems at the start of 2014/15 set back his progress, but if he can build on a solid first season, it won’t be long before we see Gonçalo knocking on the door of the first team.

Gonçalo’s strongest asset is arguably his physique. Standing at 6’1”, Paciência is atypical when it comes to Portuguese centre-forwards, but don’t let his large stature fool you – he’s quick on his feet. This deadly combination of size and skill gives him the potential to go far in the game, should he avoid further injury and Porto afford him the opportunity.

Porto purchased him midway through the 2012/2013 season, playing initially for Porto’s junior side. At the beginning of last season, García was promoted to the B team where he nailed down a starting spot playing 32 league games, as well as one first-team appearance against Braga. His breakthrough cannot be far away.

Another member of Portugal’s impressive U-19 Euro side this summer, Ivo Rodrigues looks set to make solid progress. Not a nailed-down starter in Porto B’s side last season, Rodrigues will surely play a larger role in the team this time around, especially after to his immense performance at the U-19 Euro.

A left winger by trade, Rodrigues’ greatest attributes are his pace and technique. He brings a different dimension to his team’s attack by cutting in from the left and opening up space for overlapping full-backs. He also poses a threat from set pieces, as he showed for the U-19s this summer.

I enjoyed this piece...keep 'em coming.

Sam Biggers, where is Andre Silva. Probably the best prospect at Porto. That a swing and a miss bro!!

Jose/Can
There are no comments posted here yet