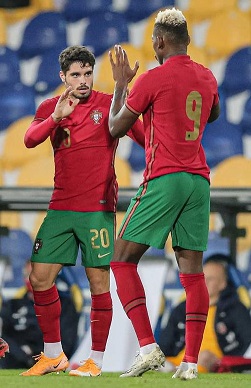 These are golden times for Portuguese football, and that is reflected in the fact that so many of Europe’s biggest clubs feature players from Portugal so prominently in their ranks.

There’s an ever-increasing stack of younger talents beginning to shine on the big stage too. While many are playing for ‘mid-ranked’ club sides right now, in the summer transfer window they may just be ripe for a huge money move to one of the continent’s major players.

With that in mind, here are five Portuguese stars who could be on their travels to pastures new this summer.

What a stunning time that Pedro Gonçalves is having in his first season at Sporting Clube de Portugal. While highly rated at Famalicão, there were those who doubted whether the 22-year-old could make the step up in grade – how wrong they were!

Gonçalves, occupying the number ten role in this dynamic Sporting side, has already netted 14 goals in 17 appearances in the Primeira Liga, and his happy knack for finding the net could yet sweep the Green and Whites to the title.

Having been amongst the goals in the German Bundesliga for a number of seasons now, André Silva is not an under-the-radar type anymore. Even though the national team is well stocked with attacking brilliance, you suspect that Silva will be a key figure in Portugal’s defence of their European Championship crown this summer.

Fernando Santos’ team are amongst the favourites to lift the trophy once more according to the Euro 2020 international football betting odds, and if the Frankfurt frontman is amongst the goals that will serve to only make his signature more hotly contested. While he never quite settled at AC Milan and Sevilla, the 25-year-old has found a happy hunting ground in Germany, and 30 Bundesliga goals in just 46 starts show why he is likely to be targeted by Bayern Munich and Borussia Dortmund this summer.

Breaking into the Sporting Lisbon first team aged just 17, Rafael Leão has been considered one of the most talented young Portuguese stars to break through in recent years. He is well and truly fulfilling that potential at AC Milan. In this, his breakthrough season, the 21-year-old has made himself a must pick for the Rossoneri, and he has rewarded Stefano Pioli with five goals and as many assists in just 15 outings.

If Milan go on to win the Serie A title, Leão will surely become of the most highly sought-after youngsters in European football.

There has been a marked downturn in fortunes for Wolverhampton Wanderers this season, but one player whose stock has risen regardless is Pedro Neto. Aged just 20, Neto has forced his way into the international set-up on the back of five goals and four assists in 23 Premier League starts, with eleven big chances created into the bargain.

A fantastically creative player, the left-footer averages 2.3 completed dribbles and 2.0 key passes per 90 minutes for Wolves. That is the output of one of European football’s best, let alone a young man still learning his craft. There will be savvy scouts and recruitment teams that are well aware of Neto’s low-key excellence.

If Portuguese football’s big guns are looking closer to home to improve their squads, they might find a solution on their doorstep. Bruno Costa has shone on loan in a Paços de Ferreira side that has outperformed all expectations this term – aided hugely by the 23-year-old’s energetic midfield play.

As well as four goals, the Portimonense man defends like a lion (1.7 tackles, 1.1 interceptions) and is excellent at recycling possession with an 87.1% pass success rate this term. More importantly for Pacos, he drives forward and makes things happen in the final third with 1.6 shots, 1.4 key passes, and 1.2 completed dribbles per 90.

Perhaps a move back to old club Porto is one the cards, while Benfica and Sporting will also be watching this supremely gifted youngster – one of many from Portugal – closely.

I hope its the next one Ronaldo deserves to be on that team!

The talent in Portugal National team is insane !!! if we don't bring home hardware , it won't be because of lack of talent. A bright future for Portugal and the U-21 are equally insane.

rooster/ usa
There are no comments posted here yet