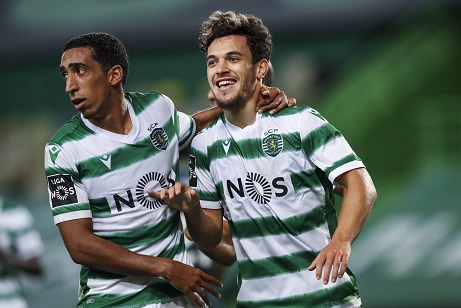 When Sporting Clube de Portugal sold Bruno Fernandes to Manchester United, they lost their goalscoring midfield maestro. However, it’s a testament to the club’s astute recruitment policy last summer that they quickly found the perfect replacement.

For around €6 million, Sporting signed Pedro Gonçalves from fellow top-flight side, Famalicão. Since putting pen to paper on a five-year deal, the 22-year-old has been a revelation in the Primeira Liga and looks to be Portuguese football's next star. So, let’s look at what makes him so special.

An eye-catching debut season at Sporting

Fernandes aside, Sporting’s recruitment policy in recent seasons has been questionable to say the least, with the club historically more well-known for its academy setup, having brought through and developed the likes of Luís Figo, Cristiano Ronaldo and Nani.

Sporting hit the jackpot with the purchase of Bruno Fernandes in 2017 though, and now Gonçalves looks to be another talent cleverly identified and brought to the Estádio José Alvalade. Since joining the 18-time league champions, the 22-year-old has predominantly filled the void left by Fernandes, playing in attacking midfield.

After 21 top-flight games in 2020/21, Gonçalves had 15 goals and four assists to his name. From the centre of the pitch, he’s found the net on 13 occasions while scoring twice when stationed out wide. Should the former Wolves academy graduate continue his current scoring form, he will surpass Fernandes’ best Primeira Liga total of 20 goals from 2018/19.

Gonçalves is on the cusp of cementing his status as a top-calibre player, but the statistics suggest that he’s already among Europe’s elite. According to the Between the Lines’ report from 20 January 2021, the midfielder averaged a goal every 83 minutes at a shot conversion rate of 42 percent. By comparison, Liverpool’s Mohamed Salah turned 24 percent of his efforts into goals during that time. Gonçalves’ goals aside, he doesn’t shy away from his defensive responsibilities, which is a testament to his application and mentality.

No need to rush a departure

Naturally, many compare Gonçalves with Fernandes. This has sparked a belief that he should follow in the Manchester United playmaker’s footsteps and move to the Premier League. The Chaves-born midfielder has the talent to thrive in England, but a period of stability in Portugal won’t hinder his progression. To date, Gonçalves has already played for seven different clubs throughout his career. What’s more, with Champions League football practically guaranteed next season, Gonçalves can test himself against the best while remaining in Lisbon.

And should the Red Devils or any other team want to purchase the player nicknamed “Pote” they will have to activate a sizeable €60 million release clause. Any potential buyer may want to see confirmation of his talent over a longer period of time before paying such a large fee.

Sporting are honing in on their 19th Primeira Liga title as they have a comfortable lead over the rest of the pack. After last winning the league in 2001/02, this will mark a long-awaited return to the pinnacle of Portuguese football.

Because of his impressive club form, Gonçalves may make it onto the plane for the Euros. With a star-studded line-up, Portugal are among the favourites to lift the trophy at many of the bonus-offering bookmakers listed on this page. At BetVictor, prospective bettors get £30 in bonuses upon betting an initial £5 wager, and this offer is redeemable upon following the site’s sign-up procedure. Pedro Gonçalves will offer Fernando Santos a natural replacement to Fernandes should he want to rotate the United midfielder during the tournament.

Gonçalves is currently one of Europe’s most sought-after players, and the opportunity to play for one of Europe’s big fish could be just around the corner. However, Fernandes spent two-and-a-half years at Alvalade before seeking a change, which served him well in the long run.

At just 22, Pote appears capable of handling a more competitive league, but there’s no need to rush into anything in the 2021 summer transfer window.